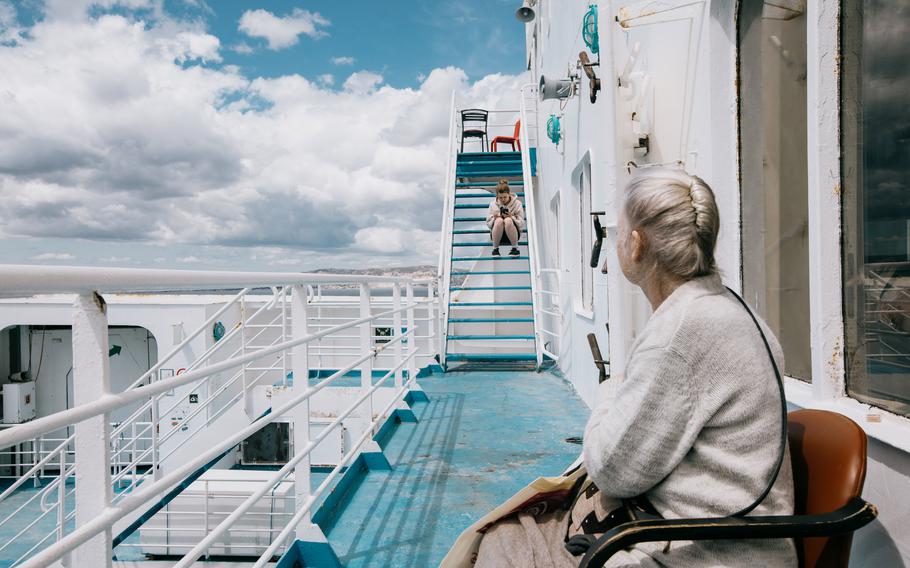 On the deck of the ferry Méditerranée, which is docked in the port of Marseille and serving as temporary housing for more than 800 Ukrainian refugees. (Sandra Mehl/The Washington Post)

MARSEILLE, France — When Svetlana Prilipko first boarded the Méditerranée ferry in the southern French port city of Marseille, she went to her cabin, she slept, and she cried.

She hadn’t been sure she would make it out of the Ukrainian city of Mariupol alive. She had feared she would never see her children again. But she had managed to escape the war and flee 1,500 miles across Europe in her shrapnel-riddled car. And now she was reunited with her son and young adult daughter, who had been waiting for her here, on a boat converted into a floating shelter for refugees.

Prilipko felt relieved. But also exhausted, devastated about the life she left behind and apprehensive about whatever might lie ahead.

The docked Méditerranée has quickly become one of France’s biggest temporary accommodation centers for Ukrainian refugees. More than 800 people are staying on the 12-deck ferry. The vast majority are women and children.

In Europe, boats have tended to be associated with efforts to keep refugees out. The European Union has paid the Libyan coast guard to stop people from crossing the Mediterranean. Nongovernmental organization vessels that have rescued people attempting the dangerous crossing have sometimes had to go from port to port seeking entry. When Germany forced asylum seekers to stay on container ships outside Hamburg, rights activists condemned the practice as deliberate isolation and symbolic deterrence.

But the Méditerranée — docked in France’s second-biggest city, with entertainment, psychological support and various other resources on board — reflects a more welcoming approach, said Virginie Guiraudon, an immigration researcher at Sciences Po Paris.

“This is more meant to be helpful, but in no way a permanent housing solution,” Guiraudon said.

The Méditerranée is slated to resume its normal ferry schedule between Marseille and Algeria in mid-June. It’s still unclear where the ferry’s occupants will go next.

Out of the more than 6 million people who have fled Ukraine, only a relatively small share — more than 70,000 — has opted to come to France. Many haven’t wanted to travel this far, especially if they have family still in Ukraine. And France doesn’t have preexisting Ukrainian expatriate networks to the extent that can be found elsewhere in Europe.

The Méditerranée may be the closest refugees in France can get to a tight community of Ukrainians.

Signs written in Ukrainian guide people through the quiet corridors. The periodic loudspeaker announcements about activities on board are in Ukrainian, too.

The car parking area in the bowels of the boat has been transformed into a gym and soccer field with the lingering smell of heavy machinery. On the upper decks, workers refurbished a movie theater that hadn’t been used in more than two decades. At the bow, drying clothes bounce in the salty sea breezes, while electricity generators can be heard buzzing from the port below. And what once was a bar is now a day care center.

“It’s turned into a village,” said Pierre-Antoine Villanova, chief executive of Corsica Linea, the company that operates the ferry. 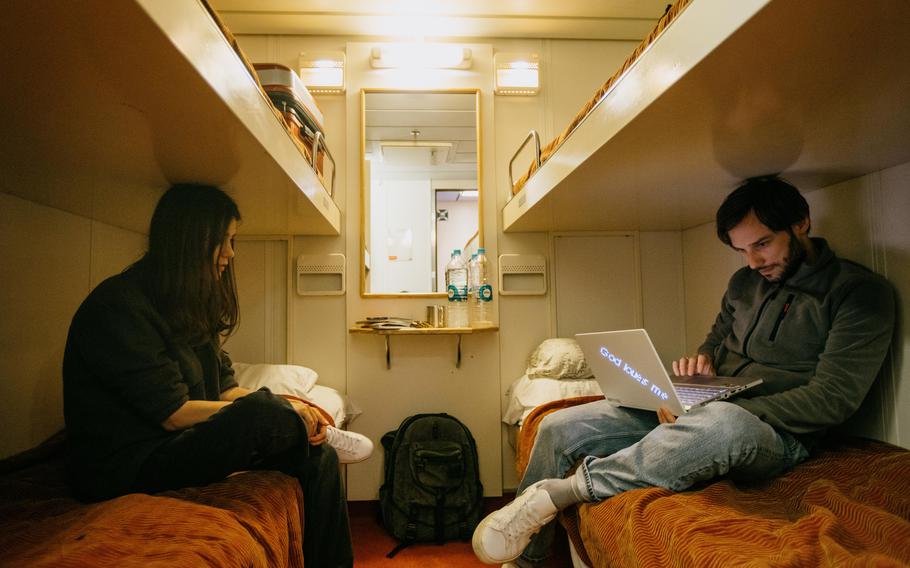 Liubov and Igor Lipetsky are studying French and looking for work while living on the ferry. (Sandra Mehl/The Washington Post) 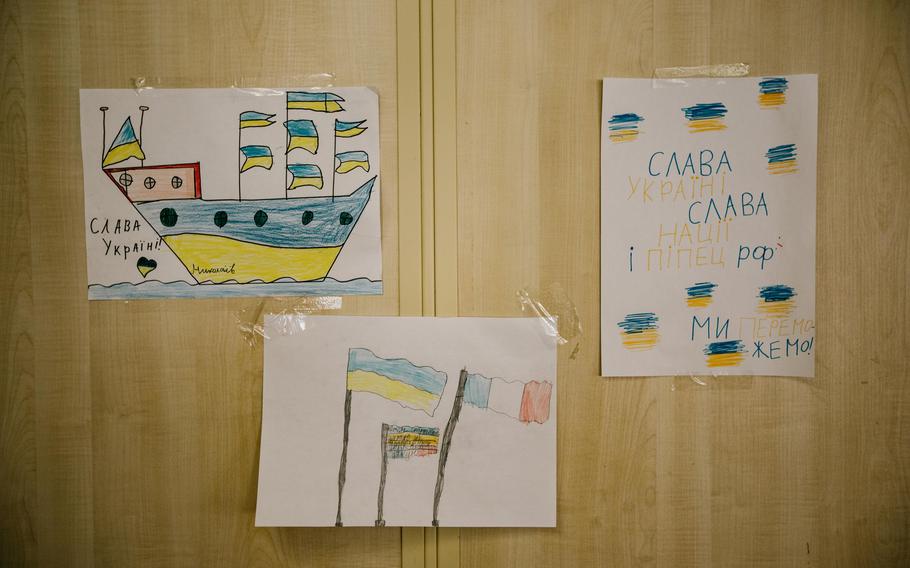 Drawings by Ukrainian children are on display by the ferry's information desk. (Sandra Mehl/The Washington Post) 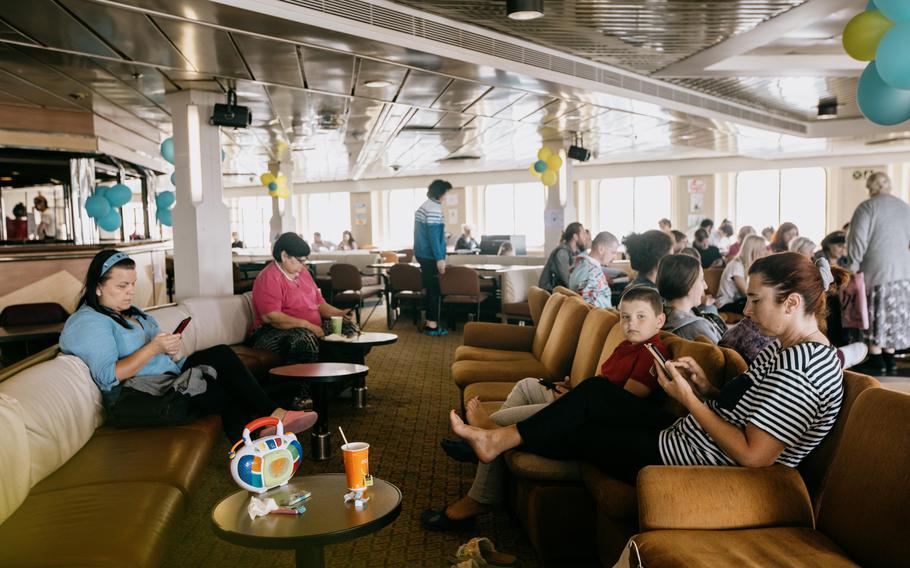 A bar serves as a place to relax and chat. (Sandra Mehl/The Washington Post)

As Europe mobilized its response to the refugees streaming from Ukraine, Villanova thought about how his company might help. The Méditerranée had been out of service for much of the pandemic, while cross-border travel restrictions were in place.

Within days, he and the French government were discussing the details of turning the dormant boat into a floating center for refugees.

For French officials, the idea of a refugee boat was appealing in part for practical reasons. Marseille faces a housing crisis. Affordable space was in short supply even before the influx of Ukrainian refugees. And so a floating center appeared to be an ideal solution to Christophe Mirmand, the region’s prefect.

Mirmand acknowledged that filling a boat with refugees “can have drawbacks.”

“We have seen communities that are too large to manage,” he said. Some refugees have had to be accommodated in cabins without windows.

Living in a temporary setup on a boat, rather than being integrated into the city, can also make it harder for some people to access jobs and start to rebuild their lives.

But Mirmand insisted that the advantages of the ferry outweigh the concerns. “Staying together, I think that’s important for them in such a situation of uncertainty,” he said.

Psychiatrists, French teachers and bank representatives are all available on the boat. The movie theater is also used for job fairs with local companies.

While the Méditerranée is a showcase for France’s welcoming stance toward Ukrainians, it may also reflect the long-term repercussions of the French government’s less tolerant strategies, said Guiraudon, the immigration researcher.

For a long time, “France wanted to deter people from coming,” she said. The experience of many North African and Middle Eastern immigrants here has been grim.

That long-standing strategy left the French government largely unprepared for the wave of solidarity that followed the Russian invasion of Ukraine.

Suddenly, voters across the political spectrum wanted France to accommodate more and not fewer refugees, even though that sentiment has appeared to be limited to Ukrainians. Government officials struggled to keep up. In many cases they have ended up supporting bottom-up and local initiatives like the Méditerranée ferry idea, Guiraudon said.

While reminders of the war aren’t always immediately visible here, they remain omnipresent.

“Even when kids are running in the hallway here, I still think it’s a shelling,” said Prilipko, who fled Mariupol.

Mental health professionals on the ferry are particularly concerned about the impact of the war on the hundreds of children here.

The children’s art is taped next to the ferry’s information desk. One drawing featured a gravestone for the flagship of Russia’s Black Sea fleet, sunk by Ukraine last month. Next to that was a painting of a pirate ship that carried the caption: “A calm sea never made a good sailor.”

The youngest children can be part of the nursery school on the eighth deck. The older ones go to schools on shore. Medical teams roam the boat on the lookout for signs of distress or trauma.

Everyone aboard has a different way of processing what has happened. Olga Rulova, 50, reached into her bag so many times to check her phone for updates from Ukraine that the zipper left scratches on her hand.

“Oh my God,” she said, unlocking her phone while standing in line for lunch. “Air raid siren!” read a message from her hometown of Kramatorsk, in eastern Ukraine.

Then another message, this time from the city of Dnipro, where her son is. “Everyone to the shelter,” the message warned.

Rulova said she wants to return to Ukraine as soon as possible, and she hopes to testify as a witness in possible international court proceedings against Russia.

Others aboard are preparing for their next life chapter to be in France. The European Union has offered Ukrainians temporary protection, with residency rights, for up to three years.

Igor Lipetsky, 35, and his wife, Liubov, 36, sat on chairs next to a former duty-free shop that’s now a storage site for donated clothes, their heads bent over notebooks with French vocabulary.

The couple had reunited in Marseille, after Igor’s four-month contract as a sailor aboard another ship came to an end. They’re planning to attend an intensive French course over the next months and to find jobs nearby.

“I’ll be looking for a job either at the port or on some coastal vessels,” Igor said. “My wife is an accountant and economist, so perhaps there’s something for her, too.”

French officials are urgently exploring alternative accommodations, including the possibility of relocating the refugees to a different boat, after the Méditerranée resumes its normal operations in June. But some people may find they need to relocate to smaller towns. 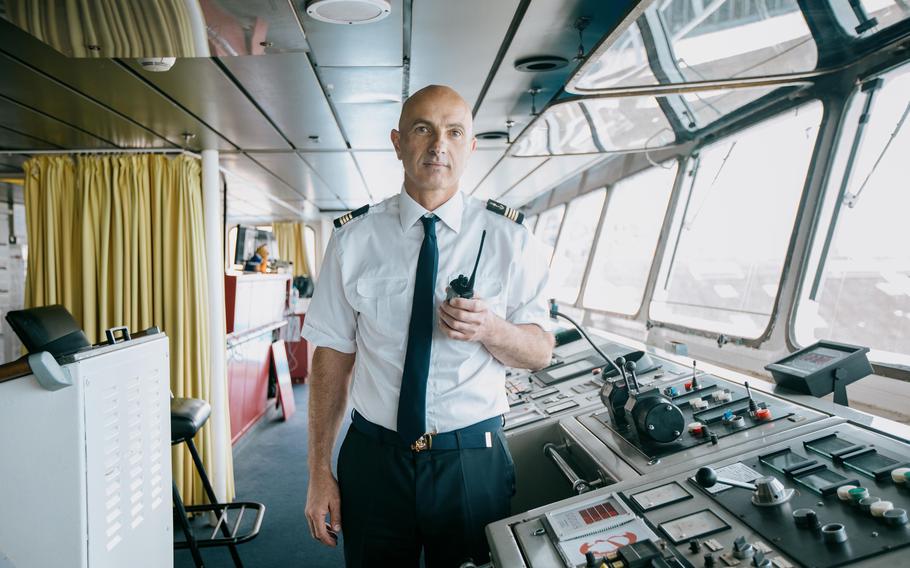 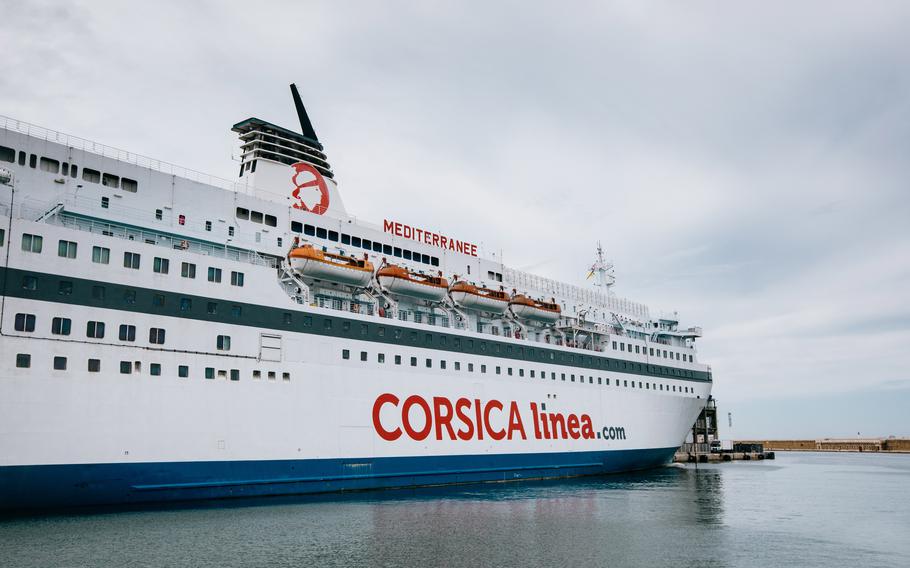 The ferry, which usually goes back and forth between France and Algeria, had been out of service for much of the pandemic. (Sandra Mehl/The Washington Post)

“For those who want to stay here and feel safe here, I think it’s going to be hard for them to go elsewhere,” said Marion Dubois, a senior psychiatrist on the ferry. Many people have appeared eager to avoid conversations about the imminent end of their stay aboard, she said.

“I’m not sure they’re really aware that in a month the boat won’t be here anymore,” Dubois said.

Prilipko’s shrapnel-damaged car is parked near the dock, with her suitcases still in the back. She said she hopes she can sell the car to pay for her time abroad. For now, a talisman — a bouquet of willow branches, a symbol of survival — is visible beneath the windshield.