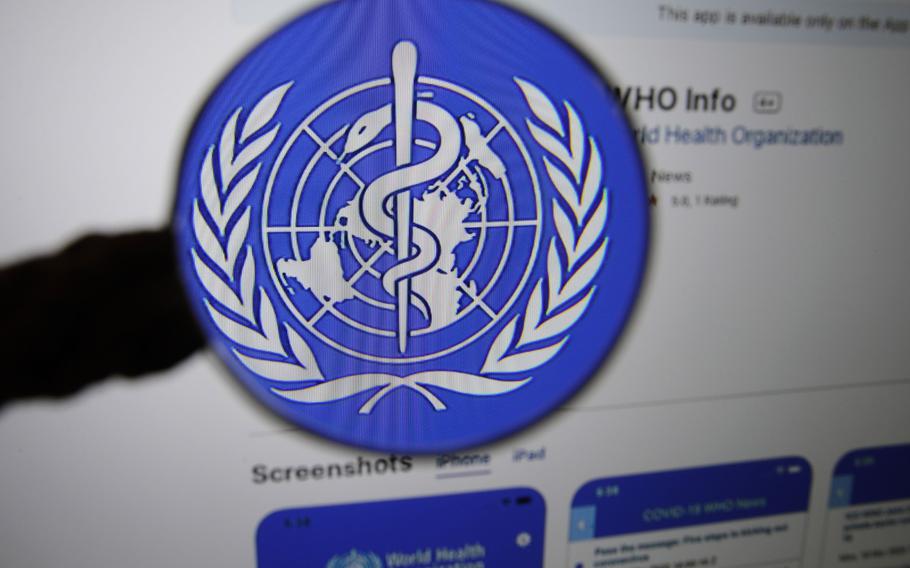 The logo for the World Health Organization Info application is displayed on a computer screen in Bern, Switzerland, on March 31, 2020. (Stefan Wermuth/Bloomberg)

As a World Health Organization official condemned the "appalling" impact on Ukrainian health care caused by Russia's invasion, European nations pushed the traditionally apolitical global health body on Tuesday to take a harder stance against Moscow, voting in favor of a resolution that could lead to the closure of a WHO office in Russia.

At a regional meeting in Geneva, the vast majority of European WHO members backed the resolution. In doing so, they disregarded Russian claims that the censure of a member state was a "gross violation" of the WHO's founding charter and that the closure of the Moscow hub, whose mission is to curb noncommunicable diseases across the continent, would lead to suffering.

In a statement to reporters after the vote, Russian health official Alexei Kuznetsov said the nonbinding resolution was "exclusively political in nature" and would not affect medical care in Russia.

The vote in Geneva was just the latest example of how Russia has been isolated by votes at international institutions since its invasion of Ukraine on Feb. 24. Moscow has been censured in two separate United Nations General Assembly resolutions and was removed from the U.N. Human Rights Council on April 7.

The impact of these moves has been largely symbolic. Some other attempts to isolate Moscow, including the suggestion that Russia should be expelled from Group of 20, have floundered.

But the resolution at the WHO could come with more concrete consequences: The closure of the WHO European Office for the Prevention and Control of Noncommunicable Diseases, which has been based in Moscow since 2014.

It also would place Moscow further at odds with the WHO, a U.N. agency that has come under the spotlight due to the coronavirus pandemic. WHO Director General Tedros Adhanom Ghebreyesus visited Ukraine last week and condemned Russian attacks on health-care facilities there. He also warned of the risks of communicable diseases, including COVID-19, as consequences of the fighting.

"We continue to call on the Russian Federation to stop this war," Tedros said at a news conference Tuesday in Geneva.

The resolution passed Tuesday called on WHO Regional Director for Europe Hans Kluge "to safeguard the technical cooperation and assistance provided by" the WHO office in Moscow and to consider the "possible relocation of the aforementioned office to an area outside of the Russian Federation."

Ukrainian Health Minister Viktor Liashko has lobbied for the office in Moscow to be closed and relocated to the "real center around which the Eastern European countries are now united — Kyiv." The resolution also called on Kluge to "consider temporarily suspending all regional meetings in the Russian Federation."

The resolution passed with 43 votes in favor. Only Belarus and Tajikistan sided with Moscow in opposing the resolution, while Armenia and Kazakhstan abstained.

While the resolution did avoid some harsher punishments, including the potential suspension of Moscow's voting rights at WHO meetings and the closure of a separate WHO office in Moscow, the respite may be brief: When the World Health Assembly, the WHO's top representative body, meets later in May, more censure could be approved.

Before the vote Tuesday, Kluge gave a grim rundown of the "appalling" health impact of the war in Ukraine, saying that at least 3,382 civilians, including children, have been killed in the conflict, with 13 million people displaced and millions more in need of assistance. The head of the U.N. Human Rights Monitoring Mission in Ukraine said separately Tuesday that the actual civilian death toll is "thousands higher" than the confirmed U.N. figure. Ukrainian officials have estimated that as many as 20,000 have been killed in Mariupol alone.

"Nothing is more destructive to health than attacking it up front," Kluge said. He added that Russia's targeting of hospitals across the country has left injured people unable to access health care.

Other civilians, he said, were suffering not just from war-related injuries but a range of other health problems, including the coronavirus, cancer and mental health issues.

"Forty percent of households have at least one member in need of chronic treatment that they can no longer find," he said, adding that just a handful of hospitals were able to function amid the strikes.

Kluge estimated that the lack of access to medicines and hospital treatment has resulted in at least 3,000 "avoidable" deaths. He said the impacts of the war would "cascade down through generations to come."

A Belgian doctor, Kluge has not indicated how the WHO will handle the resolution.