An open-ended war forces one Ukraine city to reinvent itself 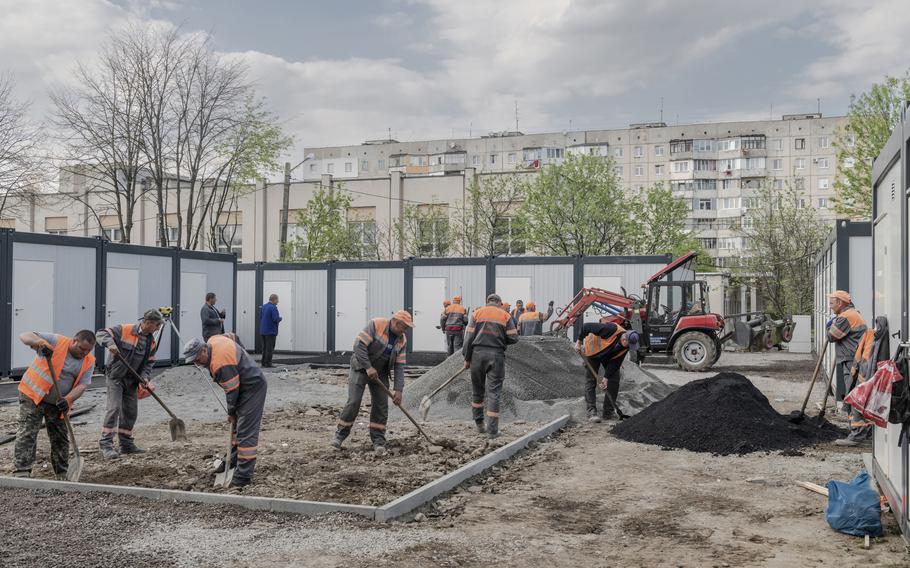 Workers at a construction site for temporary housing in Lviv, Ukraine, on May 2, 2022. (Kasia Strek, Panos Pictures/for The Washington Post)

LVIV, Ukraine — Sure, it looks like a pile of dirt ringed by boxy gray shacks, but that’s not what Anton Kolomyeytsev sees at a construction site here in this western Ukrainian city.

As the city’s chief architect, he envisions a village of container-style housing for families displaced by Russia’s war in Ukraine. He sees playground equipment accessible for wounded children. Meals cooked by students from a nearby culinary institute. And enough greenery to make it “the best courtyard in the whole neighborhood.”

Those plans will take months — and the first families are expected to move in next week.

“We have to invent things out of nothing,” Kolomyeytsev said. “We know that those who came here want to live in Ukraine. They can go west, to Poland or other countries, but it’s their decision to stay in Ukraine, to develop Ukraine.”

The construction site is one of many signs that the war is taking on a permanence in Lviv, a city that’s become a haven for the displaced and a hub for diplomatic and humanitarian efforts. With the war now in its third month, the realization is sinking in that this isn’t just a quick flare-up and that things won’t quickly return to normal. Lviv is scrambling to make long-term plans to adapt to the enormous strain on housing, hospitals and other services.

Projects already are underway to turn a charming tourist city on the UNESCO World Heritage List into a metropolis that can absorb tens of thousands of wounded and displaced people, international companies looking to move regional headquarters out of Russia, and a polyglot community of journalists and aid groups. 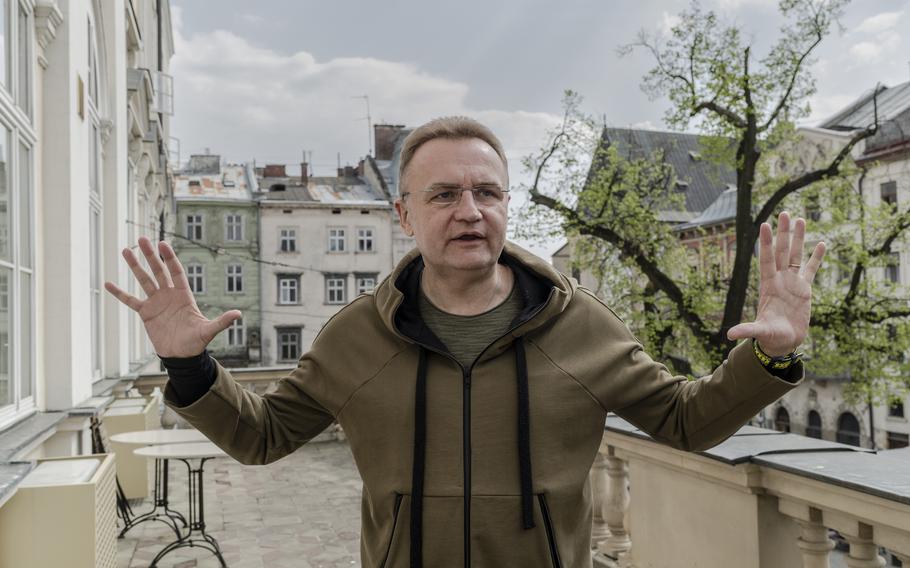 “This is colossal work and it’s essential for us to receive support from all countries,” said Mayor Andriy Sadovyi, who hasn’t taken a day off since the war began on Feb. 24.

In the first weeks of fighting, Lviv was receiving around 60,000 new arrivals a day; then it dropped to 10,000 a day and is now steady at around 2,500, Sadovyi said. Though most are in transit to the nearby Polish border, planners expect up to 200,000 to stay — a huge jump for a population that usually numbers about 700,000.

Specialized medical trains bring more injured people to Lviv every day, forcing urgent conversations on how to make the signature cobblestone streets in the city center more accessible to an influx of people with long-term disabilities. The same goes for underground bomb shelters and public buildings in a historic city that was founded in the 13th century.

The mayor’s most ambitious dream is a state-of-the-art rehabilitation center that offers high-quality prosthetics and a range of physical and psychological therapies. The municipal hospital already has been renovated to accommodate more people, the mayor said, but it still needs another 150,000 square feet - more than three acres.

“There’s a litany of problems, but this is our contribution to our victory,” Sadovyi said. “Our soldiers on the front line can fight with greater safety and comfort when they know their moms and wives and children are safe here.”

Safety is relative in wartime Ukraine. Though Lviv largely has been spared the attacks that have devastated cities in the east, deadly Russian strikes last month and a new round this week have damaged infrastructure and rattled the calm. In the runup to the war, the mayor said, city officials stockpiled medicine and blood, and they made contingency plans to protect the water supply and other services that rely on electricity.

Other needs will take longer to address. Schools are among the 500 public buildings now packed with displaced families; remote learning will continue indefinitely. There’s also a desperate need for employment. One idea is an industrial park that would create 10,000 jobs.

The city has burned through its budget, Sadovyi said, and is now relying on foreign donors. Poland has supplied $8 million worth of temporary housing, and the Turkish Red Crescent is also building some modular housing. Sadovyi said more international aid is needed “yesterday.”

Along with the population increase come a host of spinoff issues related to trauma and culture. Tutors have begun offering Ukrainian-language lessons to displaced Russian speakers. Musical concerts and yoga classes are among the ways volunteers have tried to soothe frayed nerves.

The Lviv Center for Urban History, a research institute that’s housing dozens of people in a conference room converted into a shelter, offers guided walking tours to acquaint new arrivals with the rich history of the city. 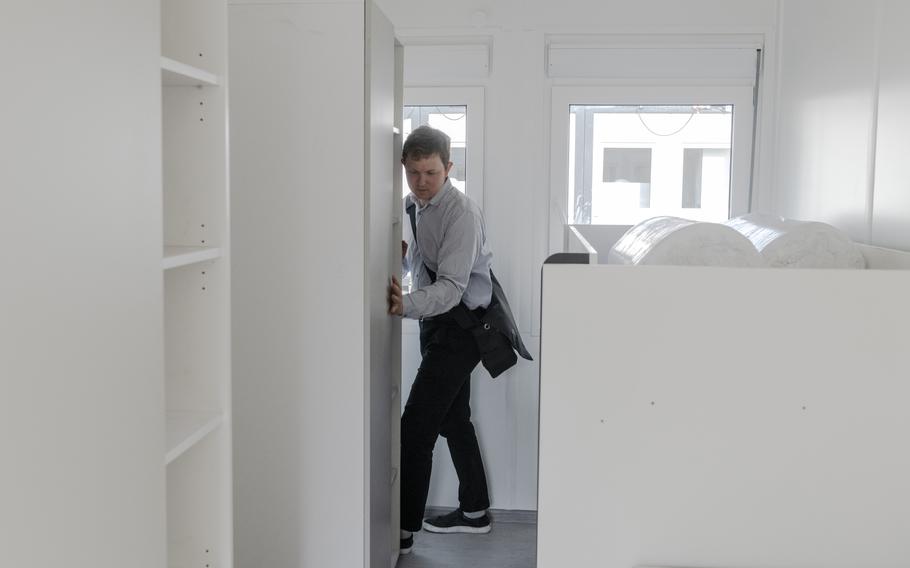 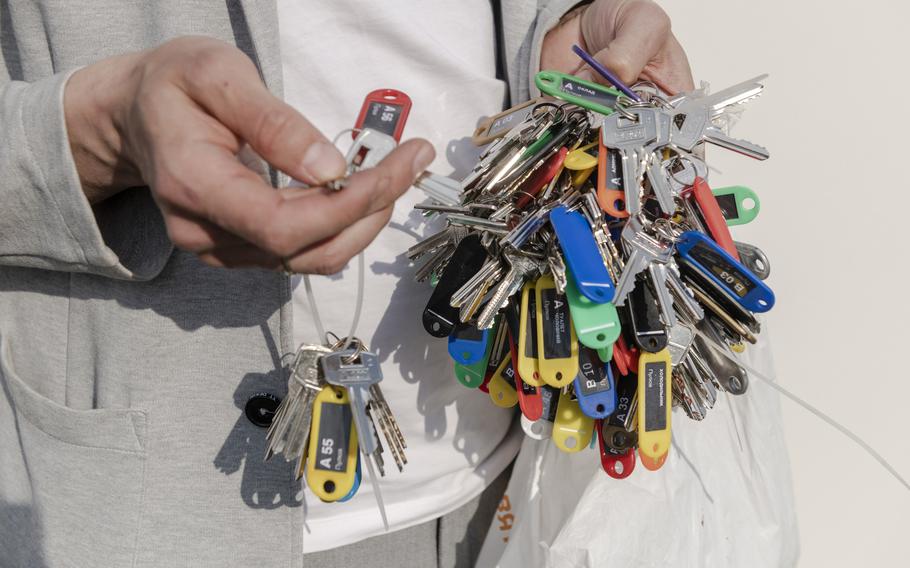 A worker at the construction site for temporary holds keys for the new units. (Kasia Strek, Panos Pictures/for The Washington Post) 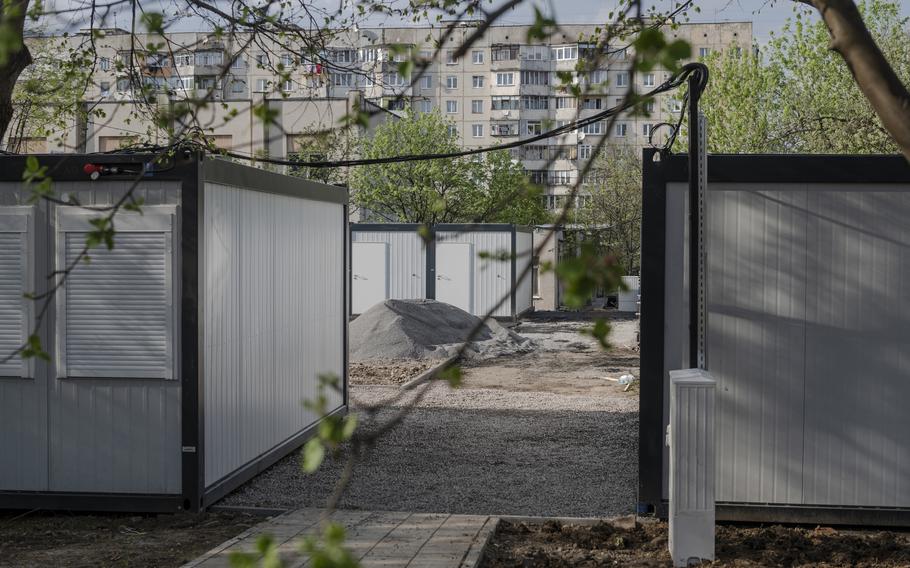 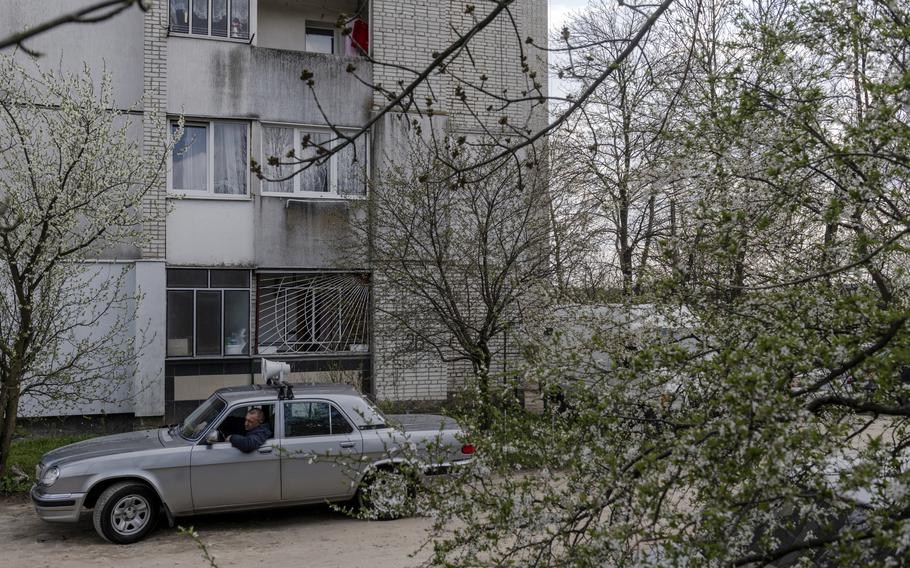 A man drives around a neighborhood where temporary housing units were built. (Kasia Strek, Panos Pictures/for The Washington Post) 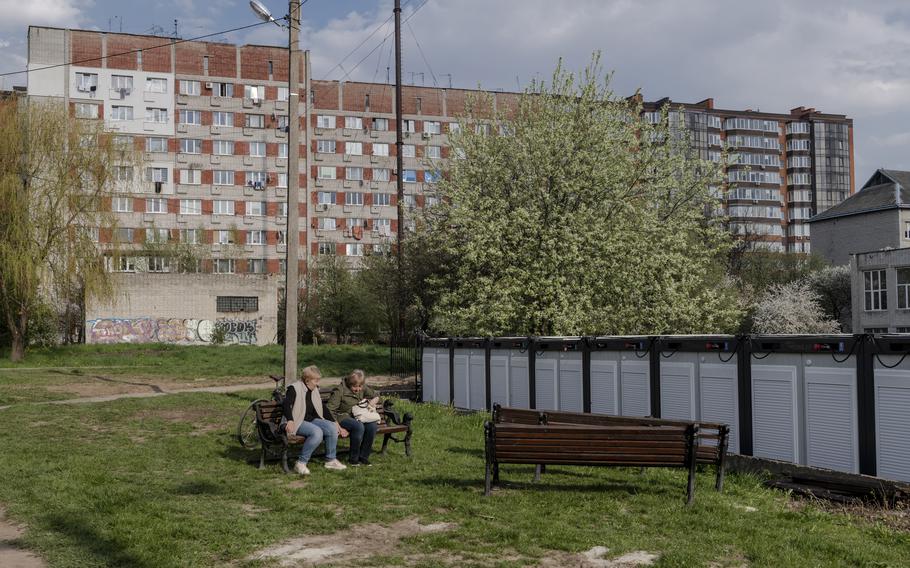 Two women sit on a bench near temporary modular houses in Lviv on May 2. (Kasia Strek, Panos Pictures/for The Washington Post) 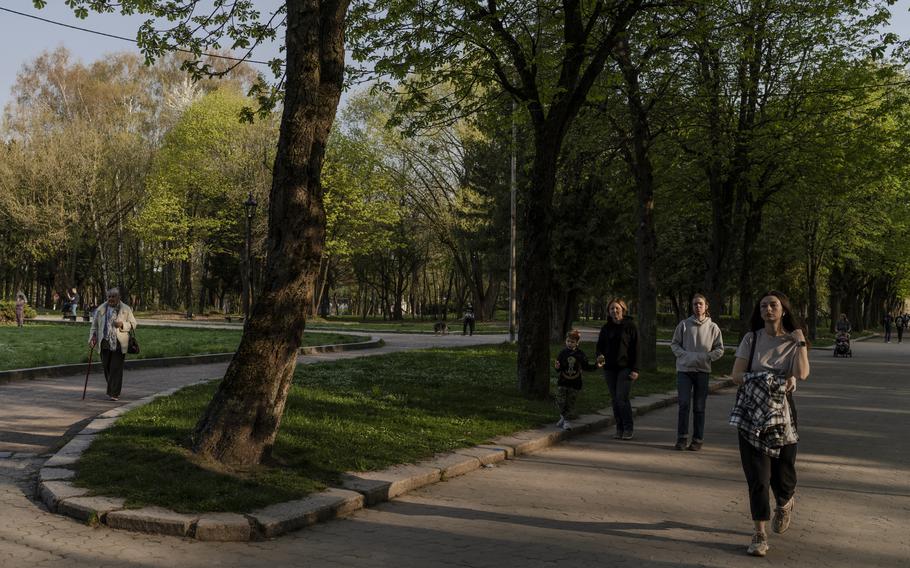 Temporary modular houses are planned for areas close to parks, universities and schools. One of the sites, which is already inhabited, is located in the center of Stryiskyi Park. (Kasia Strek, Panos Pictures/for The Washington Post)

Olha Zarechnyuk, an architectural historian who leads the walks, said her first wartime tour was delayed by an air-raid siren. Sometimes, she said, she feels terrible seeing the blank faces of people who lost their homes gazing at the grandeur of Lviv.

“As a historian, you’re used to looking at the past from some distance, but you can’t do that now — you have to take action,” Zarechnyuk said.

When Lviv was part of the Austro-Hungarian Empire, she said, local rulers bristled at taking orders from Vienna and insisted on renovating the city their way, with local materials. Today, she said, “Ukrainians are talking about the exact same thing” as they turn an ugly war into a chance to build.

“It’s about identity, anti-imperialism and how you decide in your place how to do your own business,” she said.

On one recent tour, 28-year-old Andriy Shmaliy, whose family is now scattered around Ukraine and Germany, snapped photos of neo-Gothic architecture. He said he wasn’t interested in that kind of thing before moving to Lviv but now views it as a respite.

Since fleeing Kyiv in March, Shmaliy has lived in the Center for Urban History’s conference-room shelter and said he’s considering a permanent move here. Like many visitors, he has fallen for the city’s charms.

Did he think Lviv would ever feel like home?

“Yes,” he said, then paused as if to reconsider.

Kolomyeytsev, the city architect, said it’s vital to integrate long-term displaced people into neighborhoods and not in clusters on the outskirts of town. Likewise, he rejected plans to arrange the container housing in rows, like military barracks. Instead, the units form a semicircle around a dirt patch that one day will be a garden with picnic tables and flowers.

For now, however, he’s struggling to get the basics ready. Some of the nation’s top architects have dropped by to help put together 200 bunk beds.

“I just wrote on Facebook, ‘Please, guys, everybody who knows me, help us assemble the furniture,’ “ Kolomyeytsev said.

This latest project, which will house 350 people, benefits from the trial and error of a first batch installed in a big park. At that site, displaced families said they were settling in and now have access to microwaves, washers and dryers, and children’s programs.

Those are luxuries to Liubov Makarenko, 69, who escaped the besieged city of Mariupol in March with nothing. The apartment she lived in since 1965 is rubble, her city all but gone.

Makarenko now lives in container housing with her two daughters and two grandchildren. The family can stay for up to six months. That should be long enough, she said, to regroup and decide where to go next.

“What Lviv is doing now is saving the rest of Ukraine,” she said. 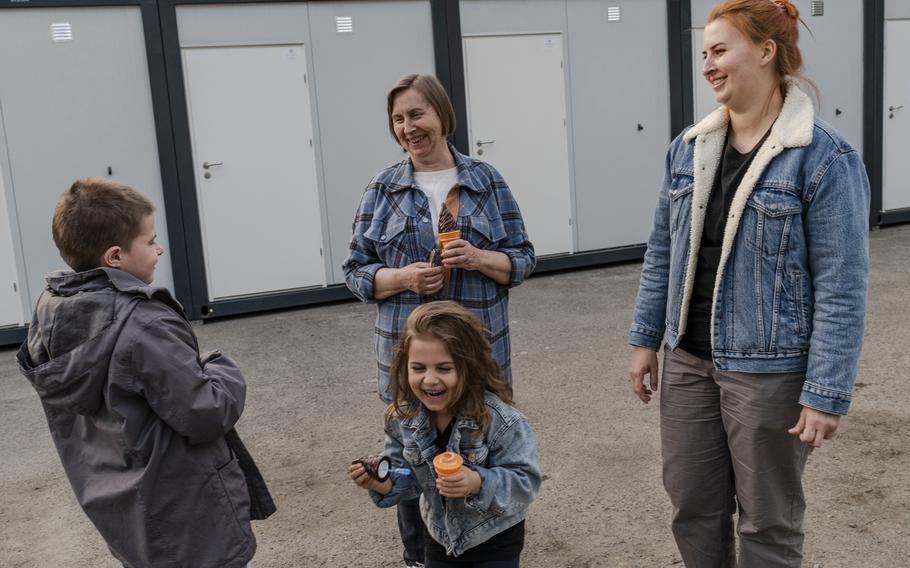 Liubov Makarenko, center back, escaped with her daughter and her daughter's son, Giorgi, 10, left, from Mariupol in March. She was joined in Lviv by her other daughter Oleksanda Koriuk, right, and her granddaughter Sofia, 5, who escaped from Kharkiv. They now live in a modular housing unit in Stryiskyi Park. (Kasia Strek, Panos Pictures/for The Washington Post)