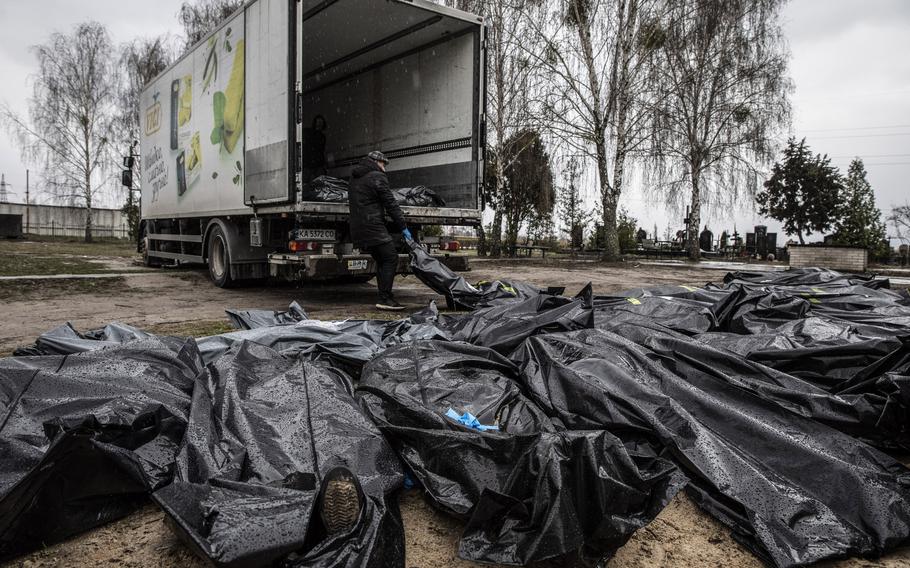 Volunteers gather the civilian corpses that have been found all over the city of Bucha, Ukraine, on April 10, 2022. (Photo for The Washington Post by Heidi Levine.)

WASHINGTON — Russia’s unprovoked attack of Ukraine is fueling congressional enthusiasm for the International Criminal Court in The Hague, with some House lawmakers urging the U.S. to reverse its longstanding policy and become a full member of the tribunal.

Senators unanimously approved a resolution last month supporting the court’s investigation of Russian President Vladimir Putin and his military commanders for war crimes committed in Ukraine. But progressive Democrats in the House argue any demands for justice from the International Criminal Court by the U.S. are hampered by its failure to ratify the Rome Statute, a 1998 global treaty that established the court.

“We are in the company of countries such as Iran, Sudan, China, and, yes, Russia as one of several nations that have refused to sign onto this bedrock of international law,” Rep. Ilhan Omar, D-Minn., wrote in an editorial in The Washington Post published last week. “If we oppose investigations into countries, like our own, that haven’t joined the ICC, how can we support an investigation into Russia, another country that hasn’t joined the court?"

Omar introduced a resolution last week calling for the U.S. to become a state party to the court. She is also leading an effort to repeal the 2002 American Service-Members’ Protection Act, informally known as the The Hague Invasion Act, which shields U.S. military and other personnel from court prosecution and prohibits the U.S. from providing intelligence and other support to the judicial body.

The measures are co-sponsored by several other Democrats, including Reps. Jamaal Bowman of New York, Cori Bush of Missouri, André Carson of Indiana, Chuy Garcia of Illinois, Sara Jacobs of California, Ayanna Pressley of Massachusetts and Rashida Tlaib of Michigan.

“As the world’s champion of democracy and human rights, it’s time for us to take this step,” Carson said. “I understand some of the concerns that have delayed U.S. membership in the ICC in the past, but I believe that joining the ICC now is one of the best ways to achieve accountability for atrocities and violations of human rights.”

The U.S. has had a tense history with the International Criminal Court. Former President Bill Clinton signed the Rome Statute in 2000 but echoed concerns by the Pentagon over the reach of the court’s jurisdiction and potential for “politicized investigations,” said John B. Bellinger III, a former legal adviser to the National Security Council and State Department during the administration of former President George W. Bush.

Bush effectively withdrew the U.S. signature from the treaty and no further action was taken during the administration of former President Barack Obama. When former President Donald Trump came into office, the court became the target of U.S. sanctions for investigating whether American forces committed war crimes in Afghanistan. The administration of President Joe Biden revoked the sanctions last year while reiterating U.S. objection to the court’s efforts to assert jurisdiction over citizens of nonparty states, such as the U.S. and its close ally Israel.

“I have watched the rollercoaster relationship between the U.S. and the International Criminal Court for more than 20 years,” Bellinger said. “I’m glad to see members of Congress and many Americans looking more closely at the ICC and seeing the role that it can play. I think it’s been sad to see over the years so many Republicans simply universally condemn the court without seeing the value that it can play in certain circumstances.”

Sen. Lindsey Graham, R-S.C., led the charge in Congress to hold the Russian government accountable, describing the tribunal as “a venue to bring bad actors to justice in those areas where the rule of law is absent.” Sen. Rick Scott, R-Fla., said the world should use “every tool at its disposal” to prosecute Russia for its “genocide and crimes” in Ukraine.

The court’s prosecutor launched an investigation into Russian war crimes and crimes against humanity shortly after Putin ordered a full-scale invasion of Ukraine in late February. Evidence of atrocities has mounted since Russian troops retreated from the suburbs of Ukraine’s capital city of Kyiv, leaving mass graves with tortured and executed civilians in their wake.

“[Putin] is a war criminal,” President Biden said earlier this month. “We have to gather the information… We have to get all the detail so this can be an actual — have a wartime trial.”

Providing that information to the International Criminal Court will be complicated given the constraints of U.S. laws, particularly the American Service-Members’ Protection Act, Bellinger said. A 1999 appropriations law also bars funding for the court.

Rep. Jacobs, a member of the House Armed Services Committee, is a proponent of rescinding both measures.

“Joining the ICC, as well as repealing The Hague Invasion Act and the ban on funding to the ICC would allow the United States to give its full support to investigations and ensure we are not enabling impunity abroad,” she said.

It is unlikely that the U.S. will become a member of the court, ratifying the Rome Statute would require the approval of two-thirds of the Senate and “that’s just a matter of politics,” Bellinger said. But modification of the service members legislation could be possible to allow for greater cooperation with the tribunal, he said.

“Congress may now realize, 20 years after it was enacted, that perhaps it was a little bit too draconian at the time that it was drafted and with the benefit of hindsight, that there should be more flexibility to support the court,” Bellinger said.

Todd Buchwald, who formerly led the Office of Global Criminal Justice at the State Department, said a provision of the law known as the Dodd Amendment offers a path for the U.S. to aid international efforts to bring foreign nationals who commit war crimes to justice.

The main dilemma facing the U.S. is balancing its longstanding policy against the court asserting authority over nonmember states with the strong desire to see Russia, a fellow nonmember state, prosecuted for its actions in Ukraine, he said.

“I think senators and congress members are doing what makes common sense,” Buchwald said. “They’re looking at this issue and they might have conceptual concerns about the ICC but they have even bigger concerns about the Russians and their calculation is, ‘Yeah, [the court] is not perfect but lots of policy issues have to get resolved where we give more emphasis to this policy or that policy.’”

One of the main pushbacks to softening the U.S. stance is the fear that American soldiers would face prosecution, Jacobs said. However, she believes that worry is misplaced because the International Criminal Court only comes into play when a country is unwilling or unable to police itself. American service members accused of violating U.S. military law are court-martialed by the U.S., she said.

“The ICC would have no jurisdiction to prosecute,” Jacobs said. “Moreover, the ICC has only prosecuted leaders and those directing the orders to commit these crimes – not regular soldiers.”

There is little chance that Putin or any other senior leaders in Russia will be arrested and brought before the court to stand trial, Bellinger said. He does anticipate the court indicting Russian political or military officials by early next year, which will “name and shame” them and restrict their travel abroad.

“That alone will be an important step toward accountability,” Bellinger said.

The newfound interest by some members of Congress in the International Criminal Court shows a marked shift in behavior given U.S. history, Buchwald said, and speaks to the unique nature of the war that Russia has unleashed in Ukraine.

“This strikes a chord in Americans and European allies because it’s just a little bit too close to the kind of horrors of World War II that we really thought just couldn’t possibly exist anymore,” he said. “The idea that a major power with an advanced civilization could be doing this just horrifies people.”

A previous version of this story incorrectly identified the state that Rep. Rashida Tlaib represents. She is from Michigan.