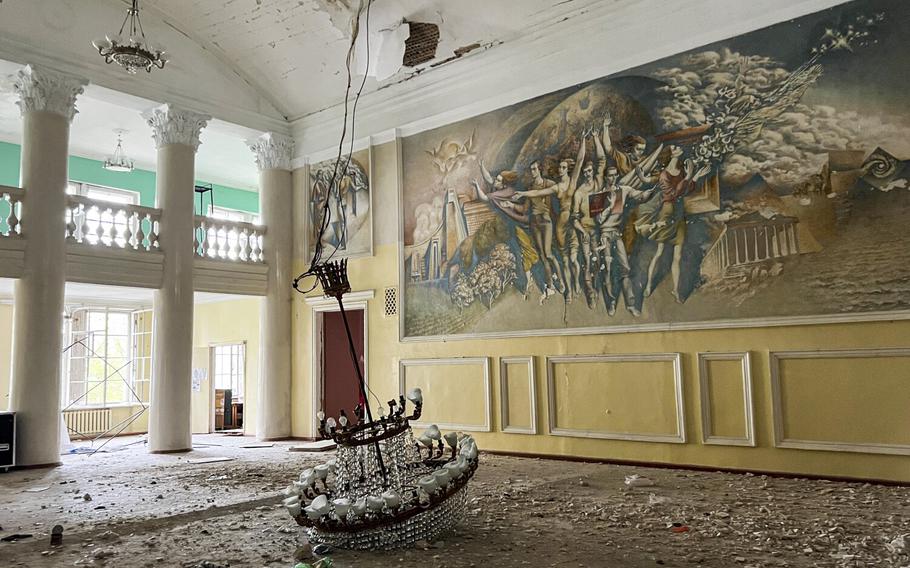 Damage from Russian shelling sits in the Rubizhne Cultural Palace, which is acting as a shelter for roughly a dozen people, in Rubizhne, Ukraine, Tuesday, April 20, 2022. (Nabih Bulos, Los Angeles Times/TNS)

If your eyes focused on the stage — ignoring the chandelier that had smashed into the theater seats, or the maw where the shell had punched through the ceiling, or the muddy mix of pulverized masonry and rainwater carpeting the ground — you could almost hear the music in Rubizhne's Cultural Palace.

But that was just pretend. War had come swift and brutal to this palace. There were no children racing upstairs to dance lessons. No performers dabbing on makeup. No seamstresses putting the final touches on a costume. There was only the crack of broken glass underfoot and the roar of artillery, shattering any illusions of art or culture.

It has been slightly more than a month since Russian troops advanced on Rubizhne, a small, well-appointed city nestled in a verdant slice of land by the Seversky Donets River. With the intense rains of the Ukrainian spring above them, they shelled the town for days, sending a lethal deluge of ordnance that obliterated everything in its path, as most of the city's 55,000 people fled while they still could.

It wasn't the first time conflict visited Rubizhne. In World War II, the Nazis occupied it, making it the site of a prison until the Red Army liberated it in 1943. In 2014, fighting engulfed the city once more, this time with the Moscow-backed separatists, who took over for three months before they were expelled by government forces.

But now it was a new war, a push by Russians to seize a wide swath of eastern Ukraine. Enemy soldiers entered the city proper, waging grinding street battles against Ukrainian defenders. The destruction was ubiquitous. On a drive through the southern part of the city, there seemed a repetitive sameness to it: almost every structure a gutted, blackened husk of rubble, splintered wood and broken glass.

The palace, though scarred, was one of the few still standing, a refuge, a sentinel in a town that, like many others, had hoped cruelty would not visit and fresh graves would not be dug.

Roughly a dozen people were sheltering here, including 19-year-old Evgenia, a culinary school student. A month ago, fighting near the city's train station destroyed the house she was in, forcing her to move to her grandmother's home. That too was destroyed, so she, along with her parents and one grandmother, came here. The other grandmother was stuck in Kreminna, a neighboring city, which had fallen to the Russians this week.

"I can't leave my grandmothers now," she said, explaining why she didn't evacuate herself.

Down in the basement were others, most of them pensioners too poor or too old to countenance the idea of going anywhere.

"My daughter is now in Germany. My mother is here, and she can't travel. I have nobody to help," said Luda, a 60-year-old pensioner and former teacher. She came here in the first days of the Russian attack, when a shell whistled through her roof and water fell into her living room.

She stood in almost complete darkness, save for the flickering light of an almost-spent candle. Others around her were lying down, swathed in blankets. It was spring, but some nights it felt like winter. One man, a cantankerous 65-year-old miner named Misha, was eating a can of what appeared to be minced meat.

No electricity or gas meant they used candles for light and wood for heating water, which was trucked in by aid workers.

"We lost signal on our phone a while ago. We get our news via FM radio. Ukrainian," Luda said.

The news wasn't good. It seldom was these days.

So much of the palace seemed like a snapshot of what was now a distant past: a bandoneon abandoned in a debris-filled room, along with some music drawn up on a stave for a lesson now never to be learned; costumes arrayed in the dressing room; and in the theater a wooden cutout of a cartoonish-looking cow for some children's play that would never have another performance.

Would the palace survive? Would it come back? If it did, would it be the same? It didn't seem likely. Underground, the people shut the basement door, sitting in the darkness, listening to sounds distant and close.

Later that day, the Russian army declared it had taken over Rubizhne.