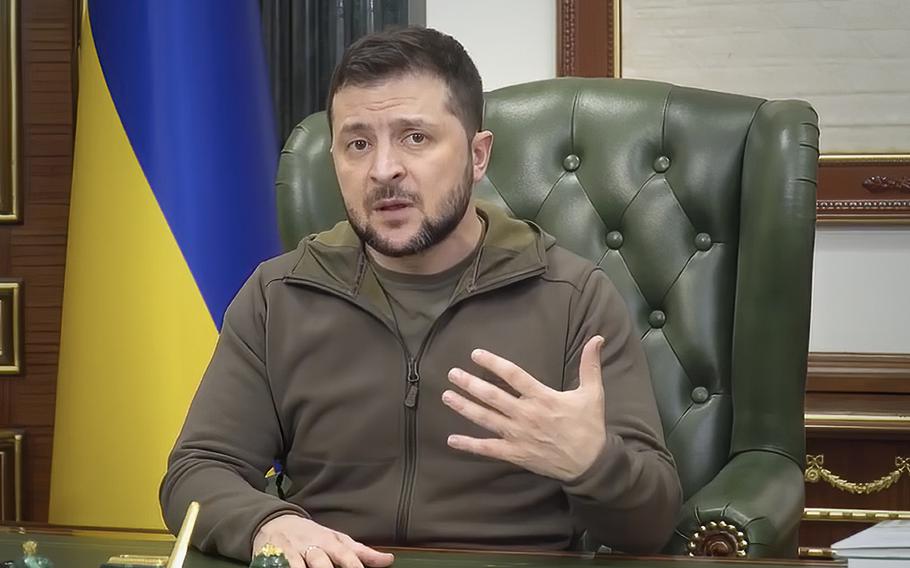 RIGA, Latvia - After a month of fighting, the architects of Moscow’s war against Ukraine had to explain to Russians why Kyiv had not fallen. That’s when the most menacing rhetoric began.

On state television, a military analyst doubled down on Russia’s need to win and called for concentration camps for Ukrainians opposed to the invasion.

Two days later, the head of the defense committee in the lower house of parliament said it would take 30 to 40 years to “reeducate” Ukrainians.

And on a talk show, the editor in chief of the English-language television news network RT described Ukrainians’ determination to defend their country as “collective insanity.”

“It’s no accident we call them Nazis,” said Margarita Simonyan, who also heads the Kremlin-backed news agency that operates Sputnik and RIA Novosti. “What makes you a Nazi is your bestial nature, your bestial hatred and your bestial willingness to tear out the eyes of children on the basis of nationality.”

Russia’s astonishing shift toward genocidal speech has been swift and seamless. Moscow officials stepped up warnings that Russia was fighting for its survival. Pundits condemned peace talks and scorned troops’ withdrawal from Kyiv and surrounding areas.

The change of gears, signaling a brutal occupation, appeared deliberate and coordinated in a nation where detailed Kremlin orders on messaging are handed down regularly to state media.

Eugene Finkel, an expert on genocide at Johns Hopkins University in Bologna, Italy, said the rhetoric isn’t just “a few crazy hard-liners” spouting off. It’s coming from prominent government officials, showing up in the press, being heard on state television - and is “clearly genocidal.”

“They’re talking about destroying Ukrainians as a group, Ukraine as a state and as an identity community,” Finkel said. “The argument is we are going to destroy this national community as it exists and create something new that we like instead, no matter how many people we kill in the process.”

In late March, the head of Russia’s Investigative Committee launched a probe into whether Ukrainian students’ textbooks “target children with hatred of Russia and the Russian language” or “distort history.” There already is evidence, Finkel noted, of Russian soldiers in Ukraine going through libraries and schools and destroying books in Ukrainian or those about the country’s history and struggle for independence.

“I think there is a clear indication that [the Russians] are targeting quite deliberately everything and everyone that is associated with Ukrainians as a national identity,” he said.

The chances that Russian President Vladimir Putin, a man with no history of reversing course when cornered, might back down as his military’s effort faltered were never very great, and U.S. officials have questioned Russia’s seriousness about peace talks. Yet after Moscow’s failure to take Kyiv, the shift to a harder line in state media suggests that the Kremlin is girding the population for a tough and potentially long fight in Ukraine’s east, one that could see even greater destruction and casualties.

It also hints at a punitive path should Russia win: potentially partitioning Ukraine, crushing its military and civil society, and occupying it for years.

A former Kremlin adviser, Sergei Karaganov, has said that the country would be left as a rump state - or perhaps as nothing at all - after Moscow is done. Russia, he made clear in an interview with the New Statesman, “cannot afford to lose.”

The threat of Nazism is one of the Kremlin’s most brazen themes. Last week, RIA Novosti ran a prominent opinion piece by pundit Timofei Sergeitsev, an outspoken supporter of Putin, that urged the liquidation of the entire Ukrainian elite, the division of the country, destruction of its sovereignty and even the abolition of its name.

“Denazification will inevitably be de-Ukrainization,” Sergeitsev wrote, requiring years of ideological repression and severe censorship in political, cultural and educational fields. Ordinary Ukrainians were complicit and must suffer the “inevitable hardships of a just war” before total submission to Russian power “as a historical lesson and atonement for their guilt.”

Others quickly piled on. Former president and prime minister Dmitry Medvedev, who is now deputy chairman of the Russian Security Council, wrote on Telegram that “Ukrainianism, fueled by anti-Russian poison and all-consuming lies about its identity, is one big fake.”

Ruth Deyermond, a Russia expert in the Department of War Studies at King’s College London, said such arguments are “hard to read in any other way than a justification for mass killing. “It’s extremely disturbing language and clearly has genocidal overtones. It’s not that they, Ukrainians, have a Führer or a political ideology or a Nazi system. They’re just Nazi.”

In a provincial city in central Russia, a young woman named Valeriya talked recently about how isolated she felt as the calls to “fight Nazis” increased. Valeriya, who declined to give her full name or where she lives because of safety concerns, said co-workers viewed her with suspicion because she has a Ukrainian boyfriend and opposes the invasion. They demanded she say whose side she was on.

“They tell me, ‘You don’t know the reality. There are fascists, and we need to get rid of them,’ “ she said.

She has begun seeing social media posts in support of genocide and fears that the sentiment might intensify.

“In our country, we were brought up with the idea that we should fight Nazis,” Valeriya said. “If state television keeps calling for the continuation of war and to kill the last Ukrainian, then maybe ordinary people will start believing it and lots and lots of people will think that that’s what we should do.”

Ukrainian President Volodymyr Zelensky said Tuesday that Russia was carrying out mass deportations. “Hundreds of thousands of people have already been deported,” he told Lithuania’s Parliament during a virtual address. “They are placed in special filtration camps. Their documents are taken away from them. They are interrogated and humiliated. How many are killed is unknown.”

The Tass news agency reported last week that Russian officials said 674,000 Ukrainians had been moved to Russia - voluntarily, they claimed. Ukrainian officials’ accusations about their treatment have been difficult to verify.

With the redeployment of Russian forces to eastern Ukraine, the rhetoric is likely to ratchet up further.

Less than two weeks before the invasion, Putin used a crude reference to express his determination to force Kyiv to accept Russia’s terms for peaceful coexistence: “Like it or not, put up with it, my beauty,” a term associated with rape for many Russians. Ukraine’s resistance has only hardened the Kremlin’s mood.

Yet Finkel fears that a Russian victory would not only destroy Ukraine but upend the post-World War II global order.

“That’s something I have been thinking about a lot. I think it will be a pretty scary world,” he said. “For Russia, it’s a test of the idea that might makes right - and we have the power, so we can do whatever we want.”