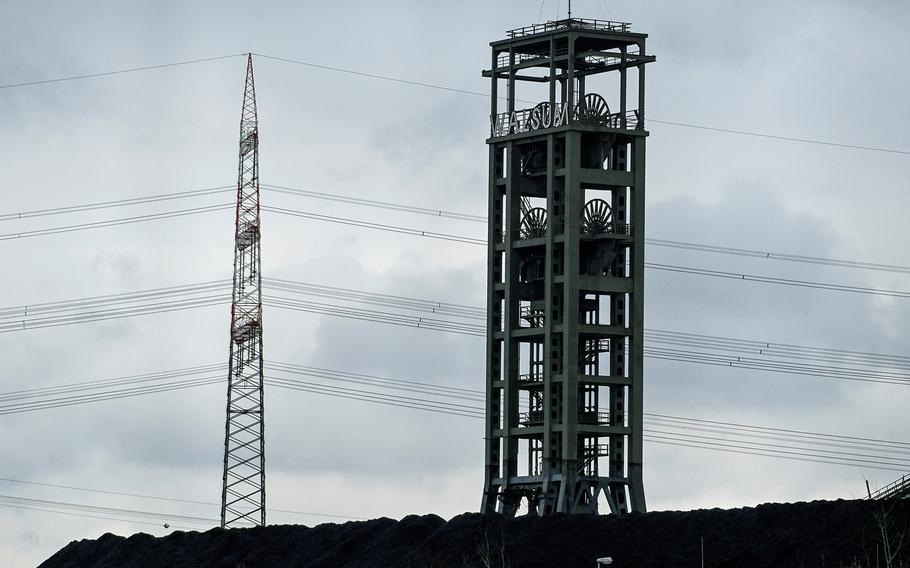 A photo taken on April 5, 2022, shows the storage site of hard coal for the coal-fired power plant of the German energy supplier Steag in Duisburg, western Germany. A new sanctions package prepared by the European Union against Russia is set to include coal, France’s foreign minister said on April 5. (Ina Fassbender, AFP via Getty Images/TNS)

(Tribune News Service) — As Europe prepares to join the U.S. in hitting the Kremlin with tighter sanctions for its war on Ukraine, there are plenty of signs that Russia is finding ways to prop up its economy.

Cargoes of Russian Sokol crude from the Far East have sold out for next month, and several Chinese firms used local currency to buy Russian coal in March. Gas flows from Russia to Europe have, if anything, increased since the invasion on Feb. 24. None of these are the subject of restrictions.

Bloomberg Economics expects Russia will earn about $320 billion from energy exports this year, up by more than a third from 2021. The ruble has already rebounded to its pre-war price against the dollar.

While Russia’s oil output is declining this month, its ability to keep the energy money flowing and boost its currency are frustrating Western leaders. That resilience is also handing President Vladimir Putin a win at home, even with the country increasingly isolated and the Russian military pulling back from swathes of Ukraine.

U.S. warnings to India this week against aligning too closely with Moscow show an awareness of the limitations of sanctions in a world that has relied so much on Russian oil, gas and other commodities.

“There is no doubt that the financial and other sanctions have weakened the Russian economy,” Patrick Honohan, a senior fellow at the Peterson Institute in Washington and former European Central Bank policy maker, wrote in a blog post on Wednesday. “But the sanctions fall short of crippling the economy, as long as they do not interrupt the flow of revenue from exports.”

European Union ambassadors are meeting in Brussels on Thursday to agree on a fifth round of sanctions, with proposals to phase out Russian coal as the first step in addressing energy imports. The European Commission, the EU’s executive, is also aiming to ban most Russian trucks and ships from entering the bloc, with exceptions for agricultural products, humanitarian aid and energy.

The measures are being coordinated with the U.S. and the Group of Seven, with governments given fresh impetus to step up penalties against Putin following the discovery of atrocities committed against civilians in Ukrainian towns that were liberated from Russian control.

Ukrainian President Volodymyr Zelenskiy said in his regular nighttime address that the new round of sanctions looked “spectacular,” but that it wasn’t enough. “It can hardly be called commensurate with the evil that the world saw in Bucha,” he said.

With Russia regrouping for a fresh offensive in eastern Ukraine, China is preparing to receive the first commodity shipments from Moscow paid for in yuan since several Russian banks were cut off from the international financial system.

Russian crude that would normally end up in refineries in Europe or the U.S. is heading for Asia, where buyers, particularly in India, are taking advantage of steep discounts. Shipments from the Black Sea and Russia’s Baltic Sea ports of Primorsk and Ust-Luga started heading to India in March, following earlier cargoes from the same terminals to China.

EU foreign ministers are likely to discuss imposing an oil embargo on Russia when they meet next week, said Josep Borrell, the bloc’s foreign policy chief. Speaking in Brussels on Thursday, Borrell said that a ban on oil is not in the latest sanctions package, though he expects ministers will tackle it on Monday, “and sooner or later — I hope sooner — it will happen.”

Russia’s natural gas supplies, which like oil have yet to be sanctioned by the EU, continue to flow freely as Europe faces an energy cost crunch that’s prompting governments to think twice before taking any action that might see prices rise further.

Italy, one of the biggest buyers of Russian gas, said Wednesday that it would support a ban if the bloc was united behind the idea, a move that Germany among others has so far opposed.

Europe relies on Russia for about 40% of its gas needs, with a third of those supplies traveling through pipelines crossing Ukraine.

As the war started, the jump in prices meant it was cheaper for European utilities to order more Russian supplies under long-term contracts than to buy it at the continent’s hubs. As a result, Europe’s request for Russian gas increased, helping state-run exporter Gazprom PJSC to boost its daily sales to key foreign markets by 17% in March from a month earlier.

The export earnings are what “Russia’s military machine requires” to continue its war against Ukraine, according to Ukraine’s foreign Ministry, singling out Hungary for its willingness to accede to Russia and pay for energy in rubles.

Still, it’s not as if Russia’s economy isn’t hurting. Foreign companies are abandoning the country, and joblessness is set to more than double from the first quarter. It’s on course to exceed 9% for the first time in more than a decade, according to some estimates.

Russia’s oil output dropped by the most in almost two years in early April as some buyers looked elsewhere, based on data from the Energy Ministry’s CDU-TEK unit that was seen by Bloomberg.

Revelations of more atrocities are likely to cause countries to harden their resolve and move to cut energy imports even at the risk to their own economies, according to Elina Ribakova and Benjamin Hilgenstock, economists at the Institute of International Finance.

“While resistance to an energy embargo remains substantial in many European countries, including but not limited to Germany, it is increasingly unlikely that this position can be upheld for much longer should more evidence of Russian war crimes emerge,” they said.