The war in Ukraine and a ‘turning point in history’ 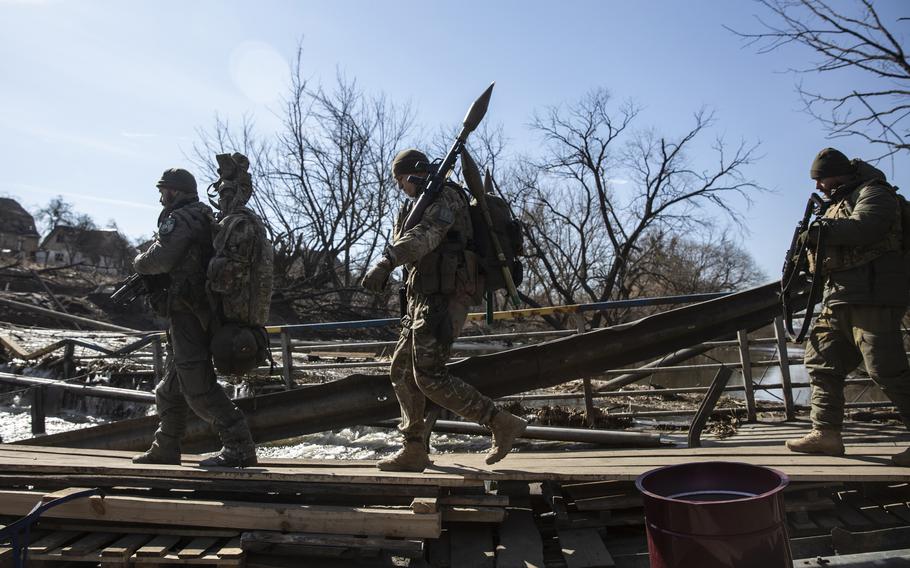 Ukrainian forces with rocket-propelled grenades cross under a damaged bridge in Irpin on March 12. (Heidi Levine/for The Washington Post)

Five weeks ago, German Chancellor Olaf Scholz delivered a fateful speech in reaction to the Russian invasion of Ukraine. His government’s decision to, among other things, inject more than $100 billion into the country’s military and deliver lethal support to Kyiv marked a sweeping policy shift away from decades of constitutional pacifism that had kept Germany often on the sidelines of major conflicts.

It was, in the words of Scholz and his allies, a “Zeitenwende” — a turning point in history, a watershed moment made all the more pronounced by the German language’s knack for sprawling, declarative nouns.

On a visit to Washington last week, German Defense Minister Christine Lambrecht said that Germany “cannot look away or stand apart,” and that this “Zeitenwende cannot be had for free.” After clinging to European visions of perpetual peace, war in the heart of the continent had shaken Germany’s cautious political establishment into action.

For many on both sides of the Atlantic, the battles in Ukraine may even mark something more stark — a “Zeitenbruch,” as coined by former German foreign minister Joschka Fischer, which is a rupture in history, the closing of one age and the entry into another marked by even deeper uncertainty and great power rivalry.

In Washington, let alone the capitals of Western Europe, there’s a palpable change in atmosphere. The heroism of Ukraine’s defenders and the reported atrocities carried out by Russian forces have fired the imaginations of the Beltway class, which after years of quagmire and stalemate in the Middle East now has a far more morally clear and potentially winnable conflict to get behind.

American flags seldom fly in my left-leaning Washington neighborhood, but a brief Sunday stroll turned up myriad iterations of Ukraine’s blue-yellow bars hanging from fences and doorways. European diplomats in the city speak of an unprecedented solidarity among NATO allies and hail the Biden administration’s leadership in rallying support for Ukraine and sweeping sanctions on Russia. The West as a geopolitical entity has rarely been more united as a bloc and more coherent as a political project.

For some U.S. commentators, Ukraine is not just ground zero in a confrontation with the Kremlin, but the battlefield for the future of liberalism. “If [Russian President Vladimir] Putin is successful in undermining Ukrainian independence and democracy, the world will return to an era of aggressive and intolerant nationalism reminiscent of the early twentieth century,” warned political theorist Francis Fukuyama. “The United States will not be immune from this trend, as populists such as [Donald] Trump aspire to replicate Putin’s authoritarian ways.”

The Atlantic’s Anne Applebaum located in Ukraine the launchpad for an ever-expanding ideological war against illiberal autocracy. “Many American politicians would understandably prefer to focus on the long-term competition with China,” she wrote. “But as long as Russia is ruled by Putin, then Russia is at war with us, too. So are Belarus, North Korea, Venezuela, Iran, Nicaragua, Hungary, and potentially many others.”

Yet, for many outside the West, the moment is less a turning point than a reminder of the past. Critics point to a long tradition of Western double standards on the world stage. The Russian invasion elicited a Western response that was swift and all-encompassing — Ukrainian refugees were welcomed, while governments imposed crippling sanctions on Russia for its violation of international law. Where was such action in other contexts, they argue, including those where the United States and allies were complicit in ruinous wars and occupations?

“We have seen every means we were told could not be activated for over 70 years deployed in less than seven days,” Palestinian Foreign Minister Riad Malki said at a security conference in Turkey in March. “Amazing hypocrisy.”

A delivery driver in Baghdad recently told the Associated Press that Iraqi insurgency against U.S. troops was as justified as Ukrainian resistance to Russian forces. “If anything, the resistance to the Americans in Iraq was more justified, given that the Americans traveled thousands of kilometers to come to our country, while the Russians are going after a supposed threat next door to them,” he said.

In the West, the fight over Ukraine is seen with almost Churchillian clarity. Elsewhere — particularly in countries that have reasons to doubt Winston Churchill and Western moralism — suspicion and distrust endures. “You never know when the U.S. will spring a nasty surprise on you and start to look at you negatively, which is something the world’s only Hindu-majority country has to worry about,” right-wing Indian journalist Raghavan Jagannathan told my colleague Gerry Shih. “You have an Abrahamic past. There’s a strong binary of, ‘You’re right or wrong, you’re with us or against us.’ “

Even in Germany, more than a month after Scholz’s speech, it’s not clear how transformative this “Zeitenwende” may be. The war in Ukraine may bog down into a conflict of attrition, raising the stakes the longer it drags out. Scholz may have initiated a sea-change in German defense policy but has so far resisted calls for wholesale bans on imports of Russian natural gas and oil, which fill the Kremlin’s coffers yet also buttress much of the German economy.

“The Zeitenwende speech broke some taboos in German foreign policy, but so far these are only enough to soothe the German conscience,” wrote Berlin-based analyst Oxana Schmies. “Economic opportunism has not yet been overcome either. Strategic thinking has yet to establish itself in the body politic.”

“The problem is that no one knows how long the Zeitenwende will actually last because now comes the hard part,” said Rachel Rizzo, a senior fellow at the Atlantic Council. “If the war starts to ramp down, I worry that there will be a real desire for things to go back to how they were, and that’s just not possible.”