In Tbilisi, Georgia, even Russian activists get a less friendly welcome 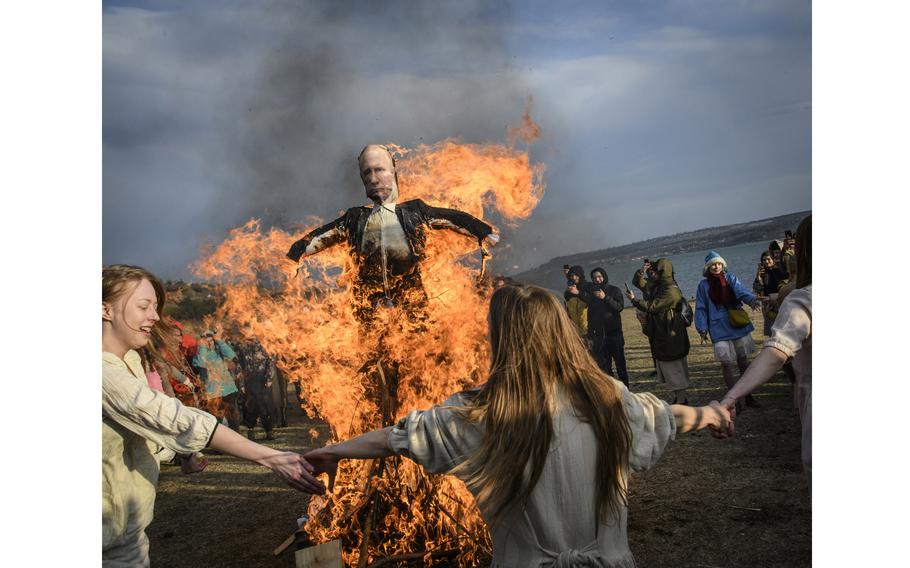 People participate in the burning of the doll of Russian president Vladimir Putin doll as a part of pagan rituals marking end of winter season and beginning of spring in Tbilisi, Georgia, on March 27, 2022. (Justyna Mielnikiewicz/for MAPS and The Washington Post)

TBILISI, Georgia — The president’s effigy was propped up on a stake, stuffed with straw and clad in a suit bursting with bank notes. Dozens of people gathered around, some with flaming torches. Within moments, they set Vladimir Putin ablaze.

“We want him to burn for a long time,” said Lada Titova, a performance artist from Lviv, Ukraine.

Titova was visiting Tbilisi when Russian forces launched their assault on her homeland, and over the past month, she has staged events to protest a war that already has claimed thousands of lives — including seven of her friends. Many of her collaborators here come from the country that invaded Ukraine.

“Almost everyone helping me is Russian or Belorussian,” Titova said. The majority are in their 20s and 30s. Even before the war, most were fighting Putin’s regime. Some had been imprisoned for their efforts. “They were chased out of Russia,” she said.

Yet their current activism is not insulating them from public anger and animosity in Georgia, which spent most of the 20th century under the rule of Russia or the Soviet Union. The country declared its independence in 1991 but less than two decades later was attacked again by its powerful northern neighbor. The scars of that conflict are still raw, and even today Russian troops remain deployed in the secessionist enclaves of South Ossetia and Abkhazia — a de facto occupation of a fifth of Georgia’s territory.

About 35,000 Russians have arrived since the war’s outbreak in Ukraine in late February, according to government estimates. The vast majority are in Tbilisi, a city of 1.1 million residents where they are now all too conspicuous and, increasingly, unwelcome. 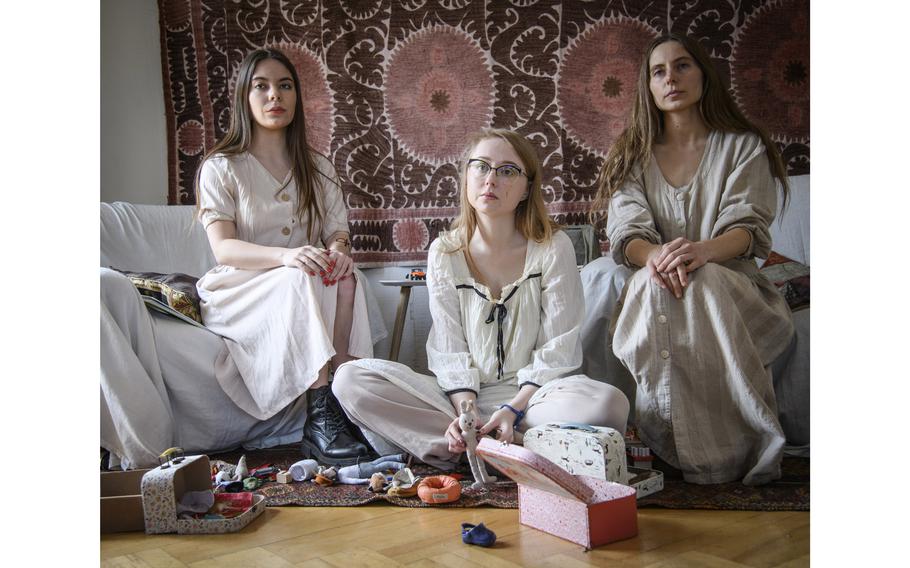 The doll and show were prepared by Lada Titova, a Ukrainian from Lviv and Femen protester; Anna Kuzminikh, a Russian from Moscow and member of activist punk band Pussy Riot's art collective; and Anna Zizeva, a Russian living in Seattle who moved to Georgia to be closer to event. From left to right: Titova, Kuzminikh and Zizeva. (Justyna Mielnikiewicz/for MAPS and The Washington Post)

Thousands of people have signed an online petition demanding a visa regime for Russian nationals and tougher immigration rules. Others are taking a more direct approach, with signs declaring “Russians not welcome” and profane graffiti about them visible on many central Tbilisi streets. Airbnb hosts regularly post that “Russian occupiers are not welcome.” Even the country’s most famous nightclub, Bassiani, renowned for its ultraliberal, pro-diversity stance, bans anyone with a Russian passport.

Anna Kuzminikh has been in the city since last summer. A film director and a member of Pussy Riot, a punk and performance band that has protested against Putin’s government for almost a decade, she fled Moscow after she and others in the group became locked in a cycle of arrest, detention and release, followed almost immediately by another arrest. She says she was physically mistreated while behind bars.

Though life in Tbilisi was “unbelievably nice and comfortable” at first, her nationality now makes her a target. Two landlords refused to rent her an apartment. She twice was kicked out of taxis.

“In one case, I was coming home late from volunteering to help Ukrainian refugees find a place to stay. I was exhausted. But as soon as the driver found out I was Russian, he stopped the car in the middle of the street and shouted at me to get out,” she recounted recently.

“I tried to tell him about the activism we were doing in Russia, about the protests, the detentions,” she continued. “He said he didn’t believe me. It was like it was all white noise to him.”

Lera Sokova, a journalist from St. Petersburg, came to Tbilisi in 2021 after quitting her job in protest of her employer’s pro-government editorial stance. A few weeks ago, she was verbally attacked while standing in a bank queue, where she had been careful to only speak English.

“A man suddenly started shouting and swearing at me,” Sokova said. “He wouldn’t stop. Even the guards had to intervene.” She ran out of the bank, doubled over on the pavement and threw up. “I couldn’t leave my house for four days. I kept thinking, how can I live in this reality?” 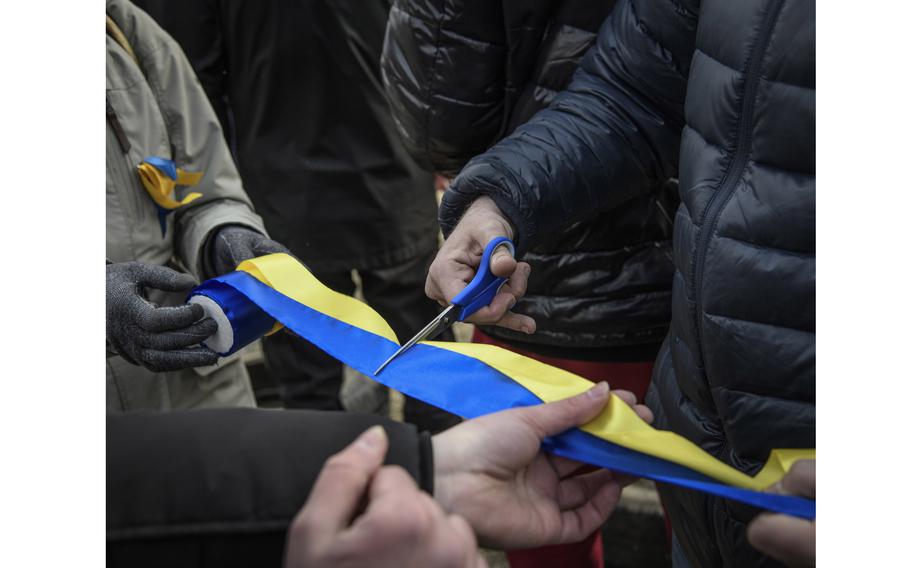 Russian, Belarussian and some Ukrainian youth gather at Tbilisi sea to participate at burning the doll of Russian president Vladimir Putin doll as a part of pagan rituals marking end of winter season and beginning of spring in Tbilisi, Georgia, on March 27, 2022. Here they are cutting yellow and blue ribbon for participants to represent Ukraine. (Justyna Mielnikiewicz/for MAPS and The Washington Post)

She is in the midst of finishing an antiwar film and, with others, planning what is envisioned as an “antiwar festival of arts” in Tbilisi. “Any Russian person who is against the government is now a foreigner everywhere,” Sokova said. “No one wants us anywhere. It’s very easy to give up.”

These activists admit their anti-regime views aren’t shared by all Russians in Tbilisi and certainly not all of their relatives and friends back home, who Kuzminikh said dismiss the destruction in Ukraine as “just a few bombs.”

Still, they want to return to their country at some point — and rebuild it post-Putin.

“We hope that there’s regime change. We need to start again, to reform our country,” said Egor Stoskov, an actor from Moscow who crossed the border several weeks ago. For the past year he had been evading a court hearing over his social media posts, including a TikTok video that poked fun at Putin’s press secretary, Dmitry Peskov.

“I realized I could no longer stay while [the war] was going on,” he said. These days shares a small Tbilisi apartment with five friends, two of them from Ukraine.

Sitting in a cafe within sight of another recent performance protest — where she had knelt in cold wintry winds clutching a bundle of blankets that represented a young child killed in the besieged Ukrainian city of Mariupol — Titova talked about the work to come. It keeps her going, she said, and counters some of her feelings that she is betraying her country by not being there to fight back. She has no idea when she will return.

“My aim is to make sure that Putin becomes recognized as a war criminal not just for what he is doing in Ukraine but what he has been doing around the world — killing people in Russia, his war in Georgia, poisoning people in the U.K.,” she said. “The list is very long.”

Friends have told her the Putin effigy burning was the “best event of the spring.” It was staged on the shores of a lake in Tbilisi, and as the effigy’s head tumbled into the flames, the crowd cheered, applauded and chanted.

Titova smiled brightly: “Any day for burning evil is a good day.” 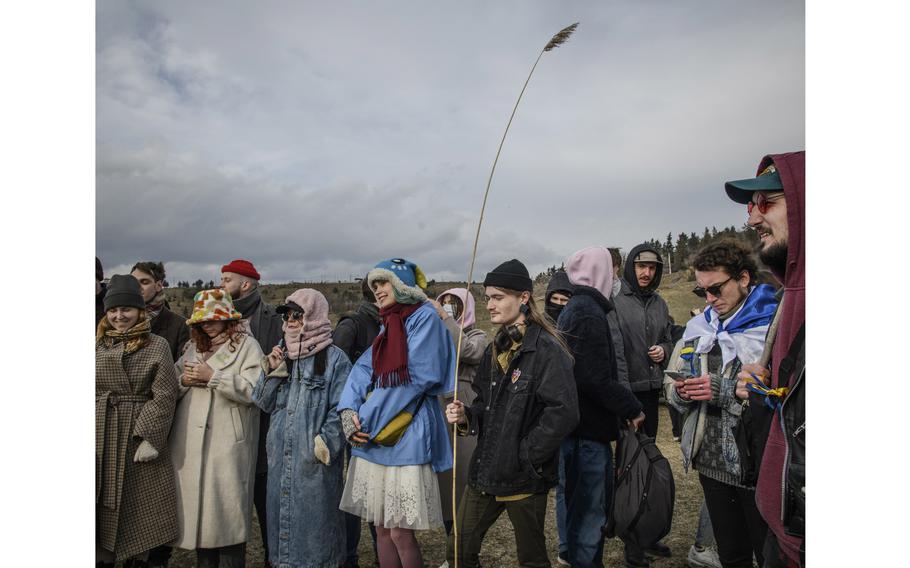 Russian, Belarussian and some Ukrainian youth gather at Tbilisi sea to participate at burning the doll of Russian president Vladimir Putin doll as a part of pagan rituals marking end of winter season and beginning of spring in Tbilisi, Georgia, on March 27, 2022. (Justyna Mielnikiewicz/for MAPS and The Washington Post)