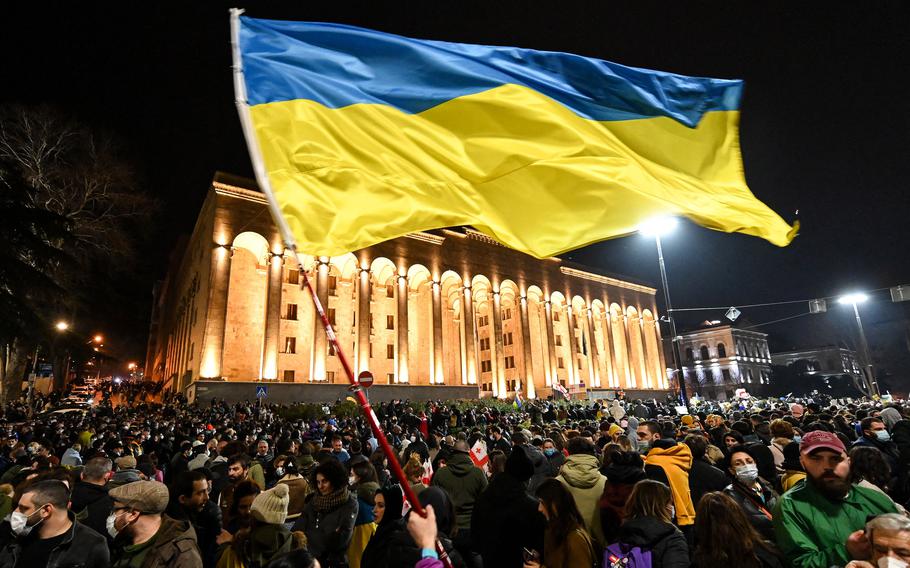 Demonstrators wave the Ukrainian flag during a rally in support of Ukraine in Tbilisi, Georgia, on March 1, 2022. (Vano Shlamov, AFP via Getty Images/TNS)

TBLISI, Georgia (Tribune News Service) — In the hilly, cobblestoned capital of the Black Sea country Georgia, a Russian IT worker made his latest of multiple attempts at what would normally be a mundane task: opening a bank account.

A branch manager, sounding skeptical about Artyom Smirnov’s reasons for being in Tblisi, asked what would happen if he just went home to Nizhny Novgorod, a city in western Russia.

“I could be put in jail just for saying I’m against the war!” said Smirnov, 25. His request for an account was rejected, along with those of a Russian couple at the bank branch.

Russia’s invasion of Ukraine has sparked Europe’s biggest refugee flow since World War II, with millions of people driven from bombed-out homes and devastated cities. Roughly a quarter of Ukraine’s 44 million people are either internally displaced or have sought safety outside the country’s borders.

But the war has also spun off a smaller diaspora: Russians, in numbers estimated to be approaching a quarter-million, have chosen to leave their homeland rather than remain under President Vladimir Putin’s rule.

These exiles are mainly young, well-educated and relatively affluent. Many are from the tech sector or have other portable remote-working skills; others are journalists, activists or academics, or worked for progressive nongovernmental organizations.

Such affiliations have been essentially criminalized under repressive measures enacted by Putin’s allies soon after the Feb. 24 invasion. Those include the shutdown of independent media outlets and a ban on criticizing the “special military operation,” as it is officially called — not a war.

By the tens of thousands, these expatriates arrive daily in cities like Istanbul, Turkey’s commercial capital, or make their way to the Baltic states of Lithuania, Latvia and Estonia, or cluster in the capitals of other ex-Soviet republics such as Georgia, Armenia and Kazakhstan.

Almost the first thing many of them will say is that they recognize that they are immensely privileged, that there can be no comparison between their plight and that of war-traumatized Ukrainians.

But they acknowledge, quietly, that they left behind entire lives — apartments, jobs, relatives — and have little idea what the future might hold.

And they also understand that they’re far from welcome everywhere.

As elsewhere, Russians arriving in Tblisi — more than 25,000 in just the first three weeks after the war began, according to Georgian authorities — have taken to social media to exchange tips and warnings: about balky landlords and suddenly skyrocketing rents, about circumstances under which it’s unwise to speak Russian in public, about feelings of guilt and shame over the war Putin is waging in their names.

The Russian leader, for his part, has gone out of his way to vilify those who have left, likening them to gnat-like insects.

The Russian people “will always be able to distinguish the true patriots from the scum and the traitors,” Putin said in a bilious March 16 speech. “And just to spit them out like a midge that accidentally flew into their mouths.”

Many of those who fled made their decision precipitously, in the days or hours after the invasion began. With European airspace closing, and with cash and flights hard to come by, many seized an opportunity to depart for places such as Georgia, where they could travel without a visa.

“People that I know in Moscow started to feel panicked, like really panicked,” Gessen, who was born in Russia, said in an interview last month on the public radio show “Fresh Air.” Gessen reported “a distinct sense that the borders were likely to close, that the country was just spiraling into some kind of North Korean scenario” in which it would become impossible to leave.

That was the experience of Dasha Takk, a 30-year-old who made a comfortable living in Moscow directing TV commercials and is attempting to settle in in Tblisi.

“We were watching the news and deciding where and how to go,” she said. Then a friend reported that two other acquaintances had been taken off a flight by Russian security officials and prevented from leaving.

“We realized we need to go fast while we still can, and took the first flight to North Caucasus to cross to Georgia,” Takk said. Bad weather held them up for five days, but they arrived safely and found a place to stay.

The welcome has been muted, though, in part because of Georgians’ unhappy history with Russia. Putin’s forces invaded in 2008 and occupied about a fifth of the country’s territory. The fact that nearly all the arriving Russians share Georgians’ sympathies with Ukraine, the exiles say, does not entirely remove the stigma — and some Georgians worry that the influx could again make them a target.

Smirnov, the IT worker, says he understands that mistrust. “Some think we just want to avoid sanctions; some say we must go back and fight Putin,” he said. “I have this feeling I’m a bad guy by default now, and I have to prove I’m normal.”

Russian authorities are showing signs of worry over the tech-heavy demographic of those who are leaving the country.

One industry lobbyist, Sergei Plugotarenko, told Russian lawmakers last month that April alone could bring the loss of 100,000 technology workers, who are eagerly welcomed elsewhere in the region.

On channels on the encrypted app Telegram, those who want to leave Russia, particularly if they work in the tech center, are being warned to take steps such as purchasing a round-trip ticket, traveling light and deleting as much information as possible from phones and other devices. Travelers have reported being forced to unlock their phones and being interrogated by security service operatives about why they are leaving.

Even after reaching safety, some emigres report falling prey to depression and disorientation.

“At first, I was enthusiastic to start something new,” said Sima Kondratenko, a 19-year-old photography model who left Moscow with two friends. But reading the news from Ukraine, “you get deeper and deeper in this dark abyss — you just don’t understand how all this could happen.”

Kondratenko, whose mother is Ukrainian, said she and other exiles had found solace in throwing themselves into volunteer work with Helping to Leave, an international organization that remotely provides Ukrainian refugees with logistical and other assistance. From Georgia, it runs around-the-clock chat forums to provide information and advice.

One of the group’s Russian founders, Egor Eremeyev, 34, said relief work helped expat volunteers put their own upheavals in perspective — and envision a future that might not lie in Russia.

“When they come to us, they get this new self-identity — ‘I’m a normal person, I help other people, help to overcome the humanitarian crisis that is going on,’” he said.

Eremeyev, a longtime activist before he left Russia for Georgia, was pessimistic about whether antiwar protests could truly threaten Putin’s rule. Public opinion polls suggest that most Russians, particularly older people who get their news from state TV, accept the Kremlin narrative that Ukraine, not Russia, was the aggressor, and that the West deliberately provoked the conflict.

“He can last for a long time,” he said of the Russian leader. “If there are 100,000 people protesting, they can arrest them and pack into their detention centers and police stations — they were getting ready for this for years.”

Kolotilov is a special correspondent, and King is a L.A. Times staff writer.