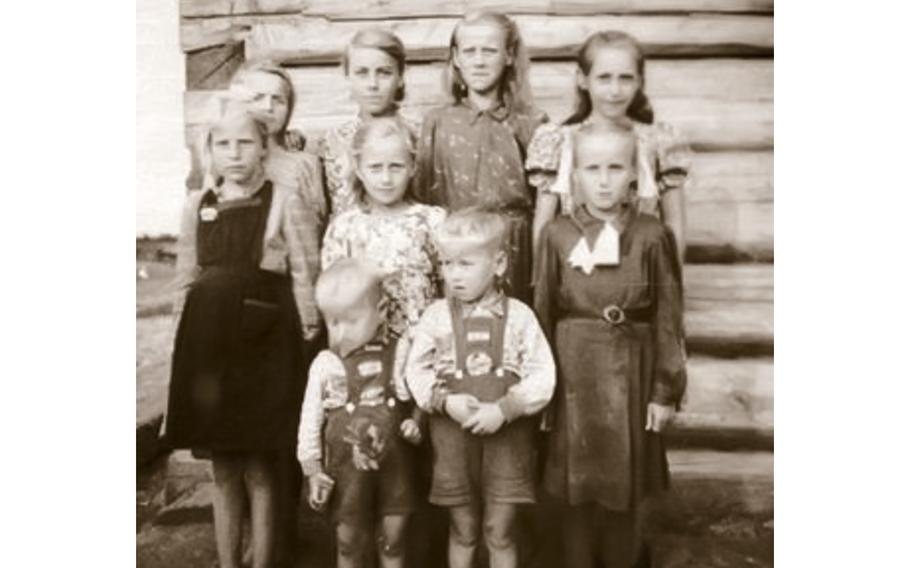 Estonian children deported to the Irkutsk region of Siberia as seen in 1952, under the former Soviet Union’s Operation Priboi, the code name for the mass deportation of Baltic people. (Wikipedia)

Thus spoke two survivors of Operation Priboi, the code name for the forced deportation by the Soviet authorities of more than 40,000 Latvian men, women and children on March 25, 1949.

Those nightmarish memories might also have issued from the hundreds of thousands of Estonians and Lithuanians who were likewise swept up that day by flying squadrons of Soviet troops and dispatched to Siberia. A total of half-a-million residents of the three Baltic states were deported between 1941 and 1952.

Now, in light of reports of similar behavior by Russian troops in the newly occupied territories of Ukraine, the peoples of Latvia, Estonia and Lithuania, including the surviving deportees and their families, are reliving that nightmare.

"It is unconscionable for Russia to force Ukrainian citizens into Russia and put them in what will basically be concentration and prisoner camps," Linda Thomas-Greenfield, U.S. ambassador to the United Nations, told CNN, noting that she could not confirm the widespread reports of thousands of people being taken against their will from the besieged port city of Mariupol.

Assuming the reports are true, Russia would be in violation of international law, particularly the Geneva Conventions governing the treatment of civilians in wartime. Survivors of the earlier Baltic abductions have no trouble believing the reports.

The fact that they coincide with last week's regionwide commemoration of the mass deportations of March 25, 1949, makes the news all the more haunting.

"Today, Latvia, Estonia and Lithuania are commemorating the victims of mass deportations effected by the Communists," Latvian Foreign Minister Edgars Rinkevics said last week, before joining the annual commemoration of the March genocide, as it is called here, by laying a wreath at the Freedom Monument in Riga. "Present-day Russia commits crimes against humanity in Ukraine."

"We Baltic people are well aware of what Chekists are capable of," Rinkevics continued, using the name of the original Soviet secret service, which carried out the first wave of deportations in the 1940s, along with their indigenous communist collaborators.

"The method and the mentality" of the Russian occupation troops "are the same," agreed Karen Jagodin, director of the Museum of Occupations and Freedom in Tallinn, Estonia.

"I don't think anyone who hasn't lived through the same thing in their country's history can understand what the current events in Ukraine awake in us," she added.

"It is very sad," concurred Milda Jarusaitine, senior museologist at the Museum of Occupations and Freedom Fighters in Vilnius, Lithuania, "but we can see many parallels between what is happening then and now."

In fact, the Soviets undertook two mass deportations from the Baltics, one in 1941, after the U.S.S.R. occupied the region at the start of World War II, then again in 1949, five years after Moscow reoccupied the three neighboring nations after defeating the Germans, who had occupied the three countries in the interim. The objective of the first expulsion, which took place on the night of June 14, 1941 - less than a year after Moscow first occupied the Baltics and a week before Nazi Germany attacked the U.S.S.R. - was principally political, aimed at purging the region of anti-Soviet forces.

Most of the estimated 60,000 Latvian, Estonian and Lithuanian "enemies of the people" who were swept up in that lightning operation and herded aboard Siberia-bound railway wagons were the men of the Baltic elite, including educators, writers, lawyers and other professionals, along with their families. More than 10% were Jewish; that expulsion could be considered the first phase of the Baltic Holocaust, which ultimately saw the virtual extermination of the Jewish population in the Baltics after the Germans kicked the Soviets out.

Operation Priboi, the 1949 deportation, was even broader in scope. Its principal aim was to overcome the native farmers' resistance to incorporating their homesteads into collectively controlled farms.

Meanwhile, a parallel, regionwide armed rebellion known as the Forest Brothers had also sprung up. Operation Priboi aimed to eliminate support for those rural guerrillas by uprooting the populace where they operated, including their families and potential recruits.

An estimated 150,000 people were deported in Operation Priboi, or 2% of the population of the three Baltic republics. But unlike in 1941, 70% of those deportees were women and children, who were sent to farms to work, and a much smaller share of the deported died. The bulk of the deportees were eventually able to return home in the late 1950s under the de-Stalinization program initiated by Nikita Khrushchev.

Efforts to commemorate the victims of the two deportations were seen by Moscow as a threat, and with good reason: They became bound up with the Baltic peoples' desire to reclaim their independence.

"It is no coincidence that the first anti-Soviet public demonstrations in the Baltic States took place in Riga with a wreath-laying at the Freedom Monument on June 14, 1987, the anniversary of the 1941 genocide," said Pauls Raudseps, an American-born journalist who has been working in Riga since the 1990s.

"In 1987, this demonstration was extremely risky - glasnost was still not very advanced and public discussions of the deportations and the Soviet occupation really only started a year later," said Raudseps, whose great-uncle and his wife and 1-year-old daughter were among the first wave of deportees. (They survived.)

But the surprised Soviet authorities allowed the demonstration to proceed. Four years later, the U.S.S.R. dissolved. The annual observances of the two deportations are now national days of commemoration in the three Baltic nations.

"The fear, anger, destruction of lives, families, homes and careers have always stayed in our cultural memory," said Jagodin, the director of the Museum of Occupations and Freedom, which opened in 2003 to preserve the memory of the two Soviet occupations of 1940-41 and 1944-1990, as well as the intervening German one.

Now, with the news of the reported abductions 1,200 miles away in Mauripol, those preserved memories have been stirred up once again for many Estonians, as well as their Latvian and Lithuanian neighbors, Jagodin said.

"I don't know if currently in Ukraine they are selecting deported people by ethnicity, language, education or social status," said Jagodin, "but in both 1941 and 1949, one of the Soviets' main goals was to execute the elite and people who would keep Estonian culture, language and identity alive."

Both deportations were "targeted attacks against the Estonian nation," she said, which sounds like what the Russians are reportedly doing in Ukraine.

Thus the added fervor and emotion that accompanied last week's commemorations of the March deportations in Riga, Tallinn and Vilnius, as well as around the Baltics. In the shadow of Ukraine, those deportations no longer seem so long ago or so far away.

"Commemorations like the one last week promote the idea that national independence is an existential matter," said Gints Apals, director of public history at the Latvian Museum of Occupation in Riga, "as well as a guarantee against the repetition of similar events in the future."

Gordon F. Sander is a journalist and historian based in Riga. He is Nordic/Baltic correspondent for the Christian Science Monitor. He is also a visiting lecturer in history at the Latvian Academy of Culture.