Ukraine had the world’s biggest plane; Russia’s assault turned it to rubble

Russia has failed in its efforts to take Ukraine’s capital, but the suburbs around Kyiv have been decimated in the assault.

Among the rubble: The remains of the massive Antonov AN-225 airplane — also called Mriya, or “dream” in Ukrainian — which had set a Guinness world record for being the largest aircraft by weight.

This was the world's largest aircraft, AN-225 'Mriya' ('Dream' in Ukrainian). Russia may have destroyed our 'Mriya'. But they will never be able to destroy our dream of a strong, free and democratic European state. We shall prevail! pic.twitter.com/TdnBFlj3N8

Ukrainian troops toured the plane’s charred remains Saturday at Hostomel airport on the outskirts of Kyiv — and positioned themselves at the airport’s entrance in a sign that they were in control, the Associated Press reported.

Kyiv’s forces have recaptured territory near the capital as Russian troops pull out of the area as part of an apparent shift in strategy to focus on the country’s south and east.

Russian forces had hoped to use that airfield in their assault on Kyiv, 20 miles to the southeast, and it was captured in the earliest days of the war.

Mriya, weighing some 705 tons with a wingspan of 290 feet, was reportedly destroyed as Russian forces fought to seize the airport in late February,.

The Russian military held this area for weeks until Ukrainian forces claimed it back.

The battle for Kyiv has been brutal, and civilians in the cities around the capital have born much of the brunt of war. As Russian troops retreat from cities and towns they briefly conquered, incoming Ukrainian forces are finding complete devastation from burned-out vehicles to bodies lining streets left behind.

Other planes left the airport when the war began. But the Mriya had been at the airport undergoing maintenance and could not fly out, according to Ukroboronpromm, the Ukrainian company overseeing it. The firm estimated it would take five years and 3 billion dollars to rebuild it — a cost it said Russia should bear.

The Antonov AN-225 was finished shortly before the former Soviet Union’s collapse and was said to be the world’s biggest. The cargo plane was originally built to transport a Soviet space shuttle. In 2009, it was recognized by Guinness World Records for airlifting the heaviest item of any plane: a power plant generator weighing 375,200 pounds. 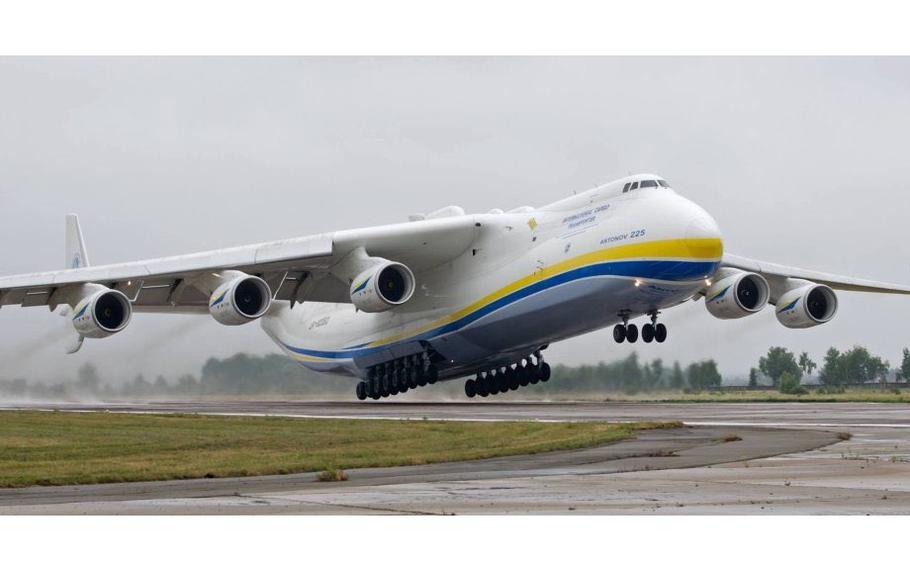 The massive Antonov AN-225 airplane — also called Mriya, or “dream” in Ukrainian — set a Guinness world record for being the largest aircraft by weight. (Twitter)