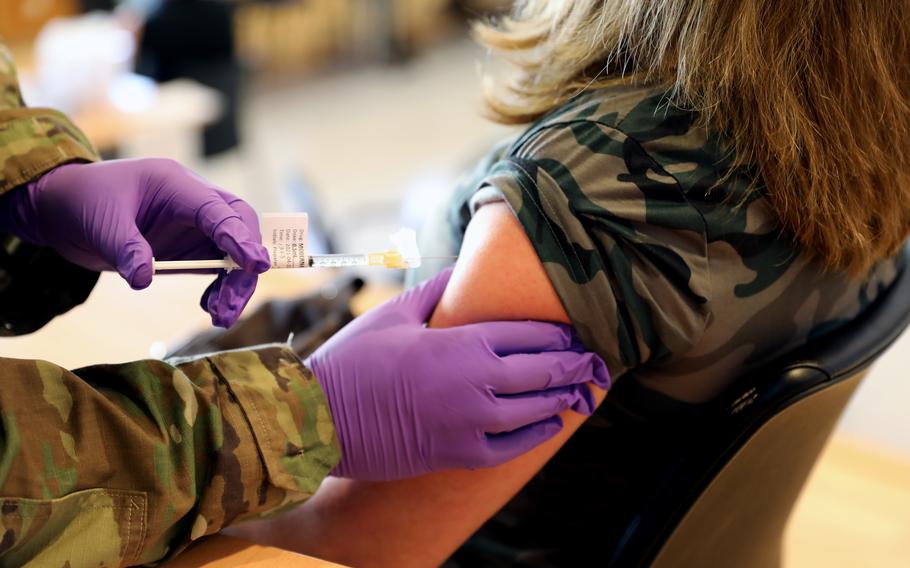 As Germany relaxes its COVID-19 guidelines, including mask wear, after April 3, 2022, proof of vaccination, recovery or a negative test will no longer be required for entrance to public events, restaurants and bars. Voluntary vaccination will remain a major factor in infection prevention, according to German health officials. (Russell Toof/U.S. Army)

KAISERSLAUTERN, Germany — It’s no April fools joke: The COVID-19 masks are coming off in Germany.

After nearly two years of fluctuating pandemic restrictions, many measures are set to expire nationwide this weekend, including in areas where the U.S. military has a significant presence, namely the states of Rheinland-Pfalz, Hesse, Baden-Wuerttemberg and Bavaria.

U.S. military installations in Germany will continue to largely mirror local guidance but can diverge from it if commanders so choose. Most, including Army garrisons Bavaria and Wiesbaden, relaxed their mask policies earlier this month.

At Ramstein Air Base in Rheinland-Pfalz, masks were still required in some common areas as of Friday, base spokeswoman Sandra Archer-Harris told Stars and Stripes.

With the new German rules coming into force, the base’s policy is under review, Archer-Harris said.

The Robert Koch Institute, the country’s leading public health agency reported on Friday that more than 252,530 new coronavirus cases were tallied within 24 hours — down from a high of 302,112 new daily infections last week.

Germany had a daily average of 219 coronavirus-related deaths on Thursday, according to New York Times data. In contrast, the U.S. has about nine times fewer cases but is averaging 698 daily deaths, the data show.

Despite the continuing high number of infections, medical masks will no longer be compulsory in public indoor spaces, including retail and grocery stores, bars and restaurants as well as in secondary schools starting Sunday.

But mask requirements remain for certain areas, including on public transportation and in health care facilities.

From Sunday, there will be no more nationwide 2G or 3G rules at restaurants and cultural events, meaning people will be freed from having to show proof of vaccination, recovery or a negative test.

The cancellation of that requirement also means that unvaccinated people can rejoin various public activities without having to present a test result.

Business owners and event organizers can implement stricter requirements based on the German right to establish house rules. Many major retailers, however, have indicated that they will adhere to local regulations and not require masks in their stores.

The social distancing requirement will be abolished, too, including attendance limits at concerts, theaters and other events.

What remains largely unchanged are quarantine rules for infected people and close contacts of infected people, according to the German health ministry.

The quarantine period is 10 days for adults, but a negative test result on day seven brings it to an end.

Schools in Rheinland-Pfalz will continue twice-weekly testing until the end of April. In Hesse, students will be tested three times a week. Should an infection occur among classmates, students will test daily for five days afterward.

The Department of Defense Education Activity in Europe told Stars and Stripes that mask wearing at its schools in Germany has been optional since the beginning of March.

Some classroom mask mandates are still in place in DODEA schools in Italy and Spain based on requirements in those countries, the agency said.

After the German parliament decided in February not to extend regulations at the federal level, only a few general protection requirements remained possible for states to decide individually: masks in clinics and nursing homes and on buses and trains; and testing in schools. Nearly all states are currently keeping these limited precautions in place.

States were also given the option to maintain certain limited measures as part of a “hot spot” regulation to counter locally rising infection trends. So far, only Mecklenburg-Vorpommern and Hamburg have invoked this measure.

“The corona situation is still tense. The pandemic is changing, but it is not over,” Baden-Wuerttemberg governor Winfried Kretschmann said Tuesday in a statement from Stuttgart. “Unfortunately, the states’ ability to act has been significantly reduced. We can only work with a very limited set of tools.”

In Rheinland-Pfalz, officials are planning to implement what they call a “working quarantine,” which would enable infected people without symptoms to continue workplace attendance under limited conditions, including mask wear.

“The infection rates remain dynamic, (and) the number of cases is still at the highest level,” Hoch said. “This remains a dramatic burden on the facilities.”