Many denounce war crimes in Ukraine, but justice is slow. Why this time may be different. 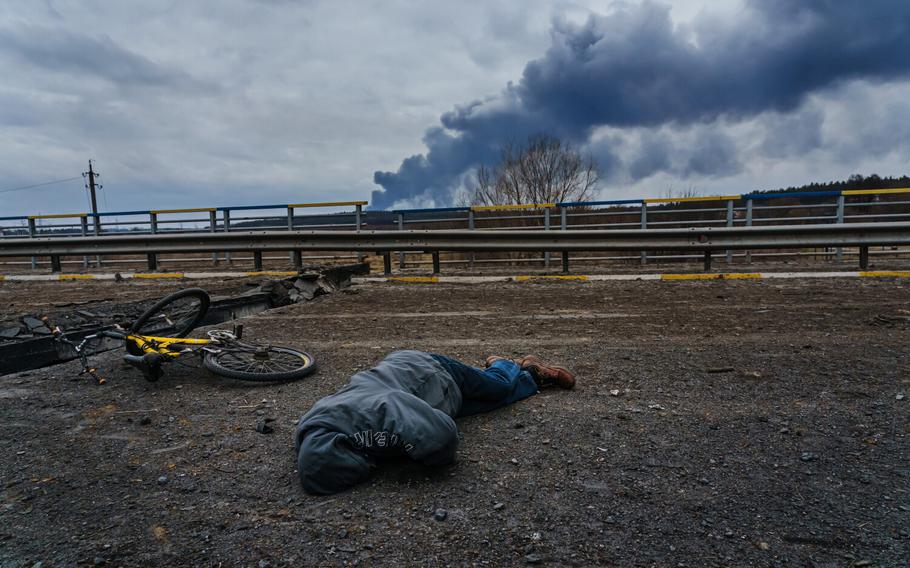 A civilian body lays dead on the ground, on the destroyed bridge overlooking the Irpin River, as Russian forces continue to bombard and advance their forces, in Irpin, Ukraine, Monday, March 7, 2022. (Marcus Yam, Los Angeles Times/TNS)

WASHINGTON (Tribune News Service) — With rare speed, the U.S. government has determined that Russian forces are committing war crimes as they attempt to bombard Ukraine into submission, a brutal onslaught that has displaced millions and likely killed thousands of civilians.

But even after egregious actions, war crimes prosecutions are methodical endeavors that can last for more than a decade before perpetrators are brought to justice — if they ever are.

Something different, though, is occurring with Ukraine, legal and human rights experts say. Thanks to smartphones, social media and the publicity savvy and pointed eagerness of Ukrainian officials, evidence of potential war crimes is being compiled even as they unfold.

"It's all happening in real time," said Jane E. Stromseth, a professor of international law and human rights at Georgetown University, who previously worked on global justice for the State Department.

This will allow investigators to build cases more rapidly than in previous theaters of war crimes, such as the Balkans or Sudan or Rwanda, all in the 1990s and early 2000s.

It took more than a decade to indict, capture and try the former president of Yugoslavia, Slobodan Milosevic, who gave the world the term "ethnic cleansing" in his campaign to eliminate Muslim Bosnians. Milosevic died in his cell at The Hague in 2006 during his trial.

Omar Bashir, the former president of Sudan, was free for more than a decade after the International Criminal Court, the lead institution for adjudicating war crimes, indicted him on charges of murder, torture and rape in Darfur. He awaits trial but conditions are being negotiated between Sudan and the court.

Unlike in those cases, investigators now also have real-time access to witnesses, thanks to the nearly 3 million Ukrainians who fled the country in just the first weeks of the war. Most are in neighboring NATO country Poland, where the ICC has already sent a team of investigators after opening a formal inquiry. Those who fled can give fresh testimony to help document what has happened on the ground in Kyiv, Mariupol, Chernihiv, Kherson and dozens of other ravaged cities and towns.

None of this means President Vladimir Putin or any other senior Russian commander or official will necessarily be in the dock anytime soon. But there is hope for some progress among many advocates and legal experts.

"There is not a time lag, and there is a prospect for justice," Stromseth said in an interview.

At the same time, there is a downside to the abundance of available material, said Aisling Reidy, a legal advisor to Human Rights Watch.

"Getting hold of evidence is both easier and harder," said Reidy, who recalled having to use radios to communicate with co-workers during the conflicts in Bosnia and Kosovo. Now, the quantity of videos, testimonies and other material is often polluted with disinformation, which Russians especially are masterful at propagating, and investigators have to sort though all of it.

Both President Joe Biden and Secretary of State Antony J. Blinken earlier this month said they "personally" believed Putin to be a war criminal. On March 23, the State Department formally announced it had determined that Russian forces were committing war crimes in repeated attacks on civilian targets.

"The deliberate targeting of civilians is a war crime," Samantha Power, head of the U.S. Agency for International Development, whose 2002 book on genocide won a Pulitzer Prize, said that day on Twitter. "From attacking a maternity hospital to a theater full of sheltering civilians, Russia's playbook is the same as in Chechnya & Syria: break the will of the people."

U.S. officials said an advantage to the swift denouncement of war crimes is to put the Russians on notice and give succor to the Ukrainians, as well as to preserve evidence.

"It's also extremely important to continue to document what's happening on the ground to preserve that information as potential evidence for future accountability purposes," said Beth Van Schaack, U.S. ambassador-at-large for global justice at the State Department. "We don't want to lose that evidence. We don't want that evidence to be tampered with."

When Milosevic-backed Serbs in Bosnia, who had led the pogroms against Bosnian Muslims, realized that inspectors from a war crimes tribunal were finally going to gain access to their territory, they began digging up the mass graves where they had deposited their victims and moved them to more remote areas in hopes of concealing the slaughter. Reporters at the time, along with United Nations officials and people from Human Rights Watch, Amnesty International and others, were at the forefront of tracking down the new graves and eventually building cases against Milosevic, Bosnian Serb President Radovan Karadzic and military commander Ratko Mladic.

Created in 1998 and headquartered at The Hague, the ICC evolved out of ad-hoc tribunals established by the U.N. specifically for Yugoslavia and Rwanda. Unlike those courts, however, the ICC is independent of the U.N. and its proceedings cannot be vetoed by Security Council members such as Russia.

The U.S. is pledging cooperation with the ICC on Ukraine, but it has refused to become a member state. It often resists — even attacks — the court if the ICC threatens to touch on, for example, U.S. military operations in Afghanistan or Israeli actions in the Palestinian West Bank or Gaza Strip. The U.S. tends to pick certain cases rather than lending full support to the ICC, critics say, which politicizes the court's actions.

The Trump administration went so far as to place economic sanctions on ICC prosecutors and attempt to bar them from entering the U.S.

"Hypocrisy abounds," said one human rights activist who did not want to be named to preserve a good working relationship with U.S. officials. "If you're going to be serious about war crimes, it has to be full-hearted."

Washington can provide enormous amounts of resources, money and expertise to prosecutions over Ukraine. U.S. intelligence can be especially valuable because of knowledge — after decades of espionage and surveillance — of Russian military units and command structures. That could be key to establishing accountability for war crimes: Who knew what — and ordered what actions — when?

"How do you show the most senior people, up to and including President Putin, are responsible for a particular operation or decision, that day?" Reidy said, pointing to the problem of determining the chain of command in specific military operations.

Russia and Ukraine are not parties to the ICC, but Ukraine has said it would accept the court's jurisdiction. While Russia would not send Putin or other senior officials to The Hague for trial, even if they were indicted, the president and others would be subject to arrest if they traveled to a country that is part of the ICC treaty. However, that is also unlikely. Bashir traveled widely after his indictment and was never arrested. Many countries seem reluctant to intervene in these cases, especially if they involve still-serving leaders.

Besides the ICC, some domestic courts can also prosecute war crimes. Citing the concept of universal justice, Spain tried and convicted a Salvadoran army officer in the murder of six Jesuit priests in that Central American country in 1989. Some of the priests were Spanish nationals. Earlier this year, a court in Germany convicted a Syrian intelligence officer for torture and other crimes committed in a Damascus detention center that he oversaw. The officer had moved to Germany and sought asylum. It is not always the case that the targets of the investigation have to be present in the country where they are being tried. They can be extradited.

A series of domestic courts spins a "web of accountability" across borders, Stromseth said, that complements the ICC and sends a message to "those who commit these horrific crimes that they can run but they cannot hide."

War crimes are generally defined as severe breaches of the landmark Geneva Conventions or other cannons of international humanitarian law, which govern, among other actions, how war is conducted. These include the deliberate or reckless targeting of civilians; use of chemical weapons; torture; rape as a tool of war; enslavement of occupied populations. (The use of prisoners of war in propaganda, which Ukraine has been accused of doing, is not a war crime but does violate the Geneva Conventions.)

Genocide is in a class by itself, the deliberate destruction of a racial, ethnic or religious group of people. Current examples would include China's incarceration of Muslim Uyghurs and destruction of their culture, and Myanmar's attempts to eradicate the Rohingya, both of which the U.S. has described as genocide.

Experts say there is one serious gap in the powers of the ICC: It has no jurisdiction over the crime of aggression — not the conduct of the war but the political decision that went into launching a war (or, as in this case, an invasion). Some domestic courts may be able to prosecute that crime, but they are necessarily less powerful than an international tribunal.

"My focus is on the gap" that misses the "universal" crime of aggression, said Philippe Sands, a law professor at the University College of London and head of the Centre for International Courts and Tribunals. It is "the only way to get to the political, military and intelligence leadership, and the financiers."