Russia has killed civilians in Ukraine, but Kyiv’s defense tactics add to the danger 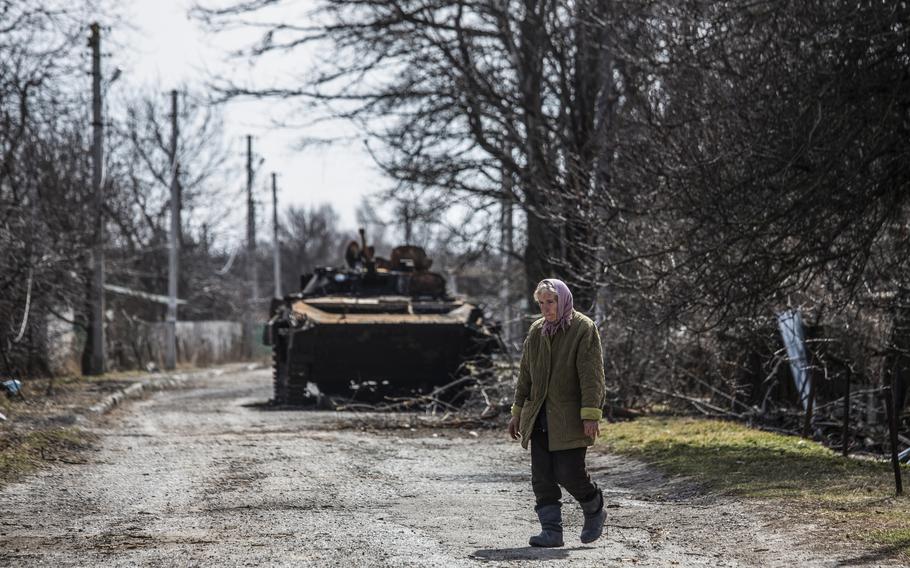 A woman walks by a destroyed Russian military vehicle on the outskirts of Brovary, Ukraine, on March 28, 2022. (Heidi Levine)

KYIV, Ukraine — The suspected Russian missile hit the tall apartment building, engulfing it in flames and smoke. It killed at least four people, including elderly residents, and shattered the lives of a close-knit community. For lawmaker Oleksii Goncharenko, the tragedy was yet another example of potential Russian war crimes.

“They are just hitting residential buildings in these areas,” said the Ukrainian parliament member, who arrived at the scene shortly after the explosion two weeks ago. “You can walk around, you will not find any military targets, or any military people. This is just terror.”

Yet a few minutes later, the whooshing sound of Ukrainian rockets fired from a multiple rocket launcher startled residents staring blankly at their destroyed homes. Then, another outgoing barrage. The weapons seemed to be nearby, perhaps a few streets away, certainly well inside the capital.

Increasingly, Ukrainians are confronting an uncomfortable truth: The military’s understandable impulse to defend against Russian attacks could be putting civilians in the crosshairs. Virtually every neighborhood in most cities has become militarized, some more than others, making them potential targets for Russian forces trying to take out Ukrainian defenses.

“I am very reluctant to suggest that Ukraine is responsible for civilian casualties, because Ukraine is fighting to defend its country from an aggressor,” said William Schabas, an international law professor at Middlesex University in London. “But to the extent that Ukraine brings the battlefield to the civilian neighborhoods, it increases the danger to civilians.”

Ukraine’s cities — and civilian areas — have become the crucible of the war, where an intense struggle is unfolding between Russians who want to seize or control these areas and Ukrainians defiantly resisting. That has transformed the conflict into a largely urban war, forged more by aerial weaponry and bombardments than traditional street-by-street fighting in many areas. With Russian forces targeting cities, the Ukrainians have responded by fortifying civilian areas to defend Kyiv, deploying air defense systems, heavy weaponry, soldiers and volunteers to patrol enclaves. Civilian casualties are mounting.

There’s no doubt that Russian forces are behind the most horrific acts of the war as it continues into a second month. They have struck schools, clinics, ambulances, shopping centers, electric and water facilities, passenger cars, among numerous indiscriminate attacks on civilians, according to human rights activists. In the southern city of Mariupol, a suspected Russian airstrike killed many people taking refuge inside a theater. It was clearly marked, with the Russian word for “children” in huge letters visible from the sky. Days earlier, a maternity hospital was hit.

“If there is military equipment there and [the Russians] are saying we are launching at this military equipment, it undermines an assertion that they are attacking intentionally civilian objects and civilians,” said Richard Weir, a researcher in Human Rights Watch’s crisis and conflict division, who is working in Ukraine.

Over the past month, Washington Post journalists have witnessed Ukrainian antitank rockets, antiaircraft guns and armored personnel carriers placed near apartment buildings. In one vacant lot, Post journalists spotted a truck carrying a multiple Grad rocket launcher. Checkpoints with armed men, barricades of sandbags and tires, and boxes of molotov cocktails are ubiquitous on city highways and residential streets. The sound of outgoing rockets and artillery can be heard constantly in Kyiv, the capital, the squiggly white trails of missiles visible in the sky.

“Every day, it’s like this,” said Lubov Bura, 73, standing outside the apartment building where she lived that was destroyed two weeks ago. Moments later, as the building was still burning, the sound of outgoing Ukrainian rockets was heard again. “Sometimes it sounds closer, sometimes it seems far. We think about it and, of course, we are worried, especially in the night.”

The Ukrainian military has “a responsibility under international law” to remove their forces and equipment from civilian-populated areas, and if that is not possible, move civilians out of those areas, said Weir.

“If they don’t do that, that is a violation of the laws of war,” he added. “Because what they are doing is they are putting civilians at risk. Because all that military equipment are legitimate targets.”

Andriy Kovalyov, a military spokesman for Ukraine’s 112th Territorial Defense Brigade, whose forces and equipment are positioned in the capital, scoffed at that reasoning. “If we follow your logic, then we shouldn’t be defending our city,” he said.

In response to written questions from The Post, Alexei Arestovich, adviser to the head of the Office of Ukrainian President Volodymyr Zelensky, said that the country’s military doctrine, approved by parliament, provides for the principle of “total defense.”

That means that volunteers in the Territorial Defense Forces or in other self-defense units have the legal authority to protect their homes, which are mostly in urban areas. Moreover, he argued that international humanitarian laws or the laws of war don’t apply in this conflict because “the main task of Putin’s military campaign is the destruction of the Ukrainian nation.” He said Russian President Vladimir Putin has repeatedly denied Ukraine’s existence as an independent nation.

“Therefore, what is happening here is not a competition of European armies according to established rules, but a struggle of the people for survival in the face of an existential threat,” said Arestovich. “We cannot prevent our citizens from defending their homes, freedoms, values ​​and identities as they understand them.” 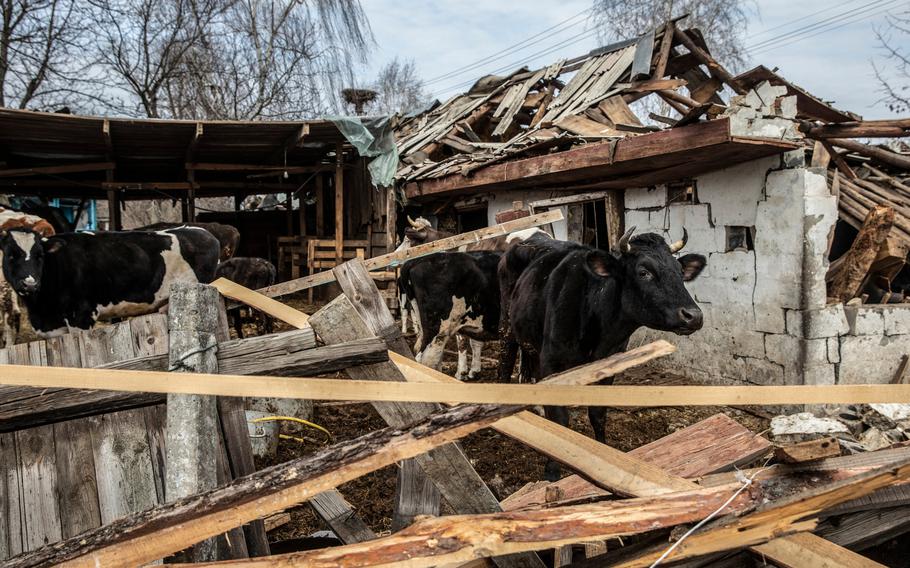 Livestock near a damaged shed at a farm on the outskirts of Brovary. (Heidi Levine)

On Monday, Ukrainian forces showed a group of journalists a military fortification in a northern residential neighborhood of the capital, near tall apartment buildings, a subway station and shops. The road was barricaded with lines of tires, concrete blocks, piles of sandbags, sharp metallic objects to stop vehicles and large metal tank traps known as “hedgehogs.”

There were also two lines of antitank mines on the road. To one side, a lush patch of greenery, an ideal place for picnics, was sealed off with a warning sign: Mines.

“If you want to protect the city, you should be ready to fight inside the city,” said Pavlo Kazarin, a territorial defense unit volunteer and spokesman for his battalion. “Unfortunately, we cannot evacuate all the city because there are still 2 million people. Still, we can stop the Russian army outside the city. But we all understand the risks. We cannot defend the city without risks or injuring the civilians, unfortunately.”

When asked if there was concern that Russian forces could view the residential apartments as a military target because of the fortifications out front, Kazarin agreed. “But I repeat: There are always some risks when you are trying to protect the city.”

He said the Ukrainian forces are trying “everything to prevent” Kyiv from becoming another Mariupol or Kharkiv, cities that were heavily bombed and besieged by Russian forces. “There is a very cruel logic to war when we are trying to protect the civilians,” said Kazarin.

Even if Ukraine violates its responsibilities under international law, “that doesn’t mean Russia gets a pass to do whatever it wants,” Weir said. If civilians are killed near a military position or equipment, Russia can still be held responsible for a possible war crime if its attack was indiscriminate and disproportionate against the civilian population.

Much depends on the size and importance of the military target, the type of weapons used, whether civilians were knowingly targeted and if the harm to them was excessive. For example, Russia’s firing of banned cluster munitions last month into three residential neighborhoods in Kharkiv, Ukraine’s second-largest city, was a possible war crime, even if the Russians claim they were targeting Ukrainian military equipment or positions, said activists.

“Where an attack on a military objective may result in civilian casualties, the damage to civilians needs to be balanced against the military advantage,” said Schabas, the professor. “If there is no military advantage, then the violence is not justified, and it is reasonable to speak of war crimes.”

But the line between what constitutes a war crime becomes more blurred if residential neighborhoods are militarized and become battlefields where civilian deaths are inevitable.

“Ukraine cannot use civilian neighborhoods as ‘human shields,’” said Schabas, adding that he was not suggesting this is what is happening.

After every suspected Russian airstrike in the capital and elsewhere, the Ukrainians have dispatched teams to gather video and other evidence to use in a potential war crimes case against Russia at the International Criminal Court at The Hague, but many of those sites could be weak grounds for alleging war crimes.

“If there are military targets in the area, then it might undermine their claim that a specific strike was a war crime,” said Weir of Human Rights Watch.

There are plenty of places in Kyiv where military forces coexist within civilian enclaves. Offices, homes or even restaurants in many residential neighborhoods have been transformed into bases for Ukraine’s Territorial Defense Forces, armed militias made up mostly of volunteers who have signed up to the fight the Russians.

Inside municipal buildings and in underground basements, including one underneath a coffee shop, Ukrainians make molotov cocktails to be used against Russian forces if they enter the capital. Inside a large factory complex, nestled in front of a bustling main highway with shops and apartment buildings nearby, a paramilitary force trains recruits before deploying them to the front lines.

Security experts for Western media organizations have noted that Ukrainian air defenses are so centered in the city that when they hit incoming Russian rockets, missiles or drones, the debris has sometimes struck or fallen into residential complexes.

Ukrainian soldiers and volunteers warn journalists not to take photos or video of military checkpoints, equipment, fortifications or impromptu bases inside the city to avoid alerting Russians to their locations. One Ukrainian blogger uploaded a TikTok post of a Ukrainian tank and other military vehicles positioned at a shopping mall. The mall was later destroyed March 20 in a Russian strike that killed eight people.

There is no proof that the TikTok post led to the strike. On Facebook, a person supportive of the Ukrainian military urged that the man be hunted down for revealing Ukrainian military positions “for the sake of likes” on social media. “I pay $500 for any information about this author on TikTok. ID, residence address, contact details.” The Security Service of Ukraine later said it had arrested the blogger.

When asked whether she worried about having military weaponry and fighters so close to where she lives, she replied after a long pause: “I don’t know what to say. We are just hoping that everything will be all right and this will end soon.”

Like most residents interviewed, she expressed stoicism and loyalty to Ukraine’s military forces. She said she doesn’t like how the capital has been altered into a fortresslike military zone, but she understands. It was worth hearing the sound of outgoing rockets or living within sight of heavy guns to prevent the Russians from entering the capital, she said.

“We feel bad and saddened because of how our city has changed,” said Kramerenko. “But we understand the situation and believe in our Ukrainian soldiers. We Ukrainians have to fight back.”

The Washington Post’s Claire Parker in Washington and Volodymyr Petrov in Kyiv contributed to this report.