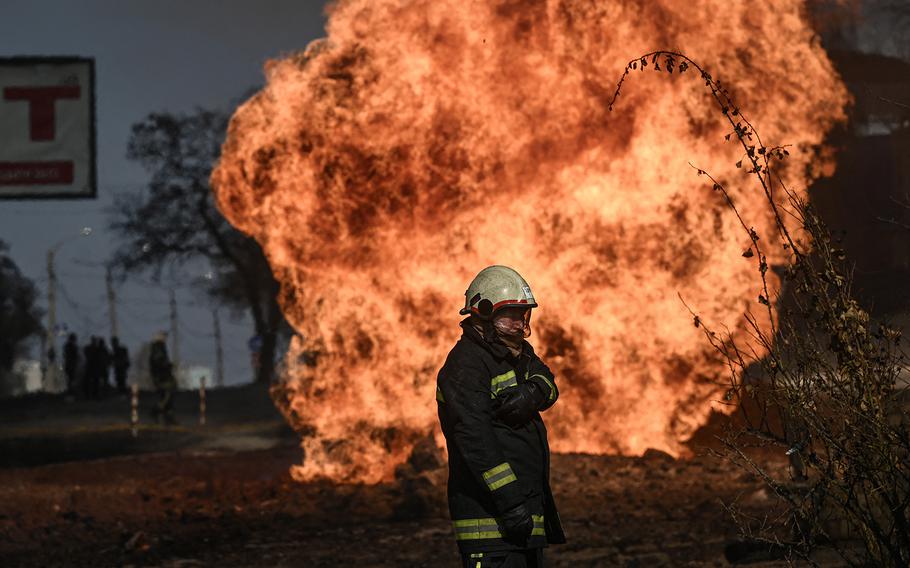 A Ukrainian firefighter stands next to flames rising from a fire following artillery fire on the 30th day on the invasion of the Ukraine by Russian forces in the northeastern city of Kharkiv on March 25, 2022. Russian strikes targeting a medical facility in Kharkiv on March 25, 2022, killed at least four civilians and wounded several others, Ukrainian officials said. (Aris Messinis/AFP via Getty Images/TNS)

With his forces claiming to have pushed invading troops farther away from Kyiv and to have destroyed a Russian naval ship in the Russian-occupied port of Berdyansk, Ukrainian President Volodymyr Zelenskyy continued to beseech NATO leaders for more supplies and equipment.

In Brussels on Thursday for emergency summits with NATO, the Group of 7 leading industrialized nations and the European Commission, President Joe Biden committed to more humanitarian aid for Ukraine but stopped short of promising Zelenskyy more military force beyond the U.S. weapons and ammunition that he said were already en route to the country.

"The United States is committed to provide over $2 billion in military equipment to Ukraine since I became president: anti-air systems, anti-armor systems, ammunition," Biden said at a news conference. "And our weapons are flowing into Ukraine as I speak."

Biden also raised the possibility of ejecting Russia from the Group of 20 major economies as punishment for the invasion. Asked whether the U.S. or NATO would respond with military action if Russian President Vladimir Putin used weapons of mass destruction, Biden said yes, but he did not offer detail

Russian forces continued to make steady inroads Thursday in the beleaguered southeastern port of Mariupol, entering the heart of the city and seizing its largest temple, the Church of the Intercession of the Mother of God. Video footage on Russian state television showed Putin's forces firing rocket launchers in the streets.

But in many other cities, Zelenskyy's military forces continued to put up spirited resistance to an invading force of greater size and strength.

Around Kyiv, where Ukrainian military leaders and Western intelligence officials say local forces have pushed the Russians farther back from the capital's outskirts, artillery fire and battles were reported overnight in the northwestern suburbs of Kotsiubynske and Irpin and farther out in Yasnohorodka.

The Kyiv city administration said Thursday that Russian attacks have damaged or destroyed 12 schools and six kindergartens since last month.

If Ukraine can sustain its counteroffensive outside Kyiv, it has the potential to "change the political dynamic of the war," tweeted Phillips Payson O'Brien, a professor of strategic studies at the University of St. Andrews in Fife, Scotland.

If pushed 25 miles outside the capital — about the distance of Yasnohorodka — Russia would be forced to rely on air-supplied missiles and bombs, he wrote.

"The Russians being pushed back will start seriously degrading the ability of their artillery to hit Kyiv, allow the Ukrainian capital to rest and restore," he added. "It deprives the Russians of one of their most common weapons in this war — terror."

Ukraine's Defense Ministry said Thursday that Ukrainian forces had destroyed a large Russian landing ship, the Orsk of the Black Sea fleet, at the Russian-occupied port of Berdyansk, about 45 miles southwest of Mariupol. Photos shared by the military showed a ship engulfed in flames, but the claims could not be independently verified.

"The destroyed ship in Berdyansk could carry up to 20 tanks, 45 armored personnel carriers and 400 paratroopers," Ukraine's deputy defense minister, Anna Malyar, said on Ukrainian TV. "This is a huge target that was hit by our military."

In an intelligence update late Thursday, the British Defense Ministry described the Russian ship and nearby ammunition storage depots that were also hit as "high value targets."

It said that if such attacks continue, they could "force the Russian military to prioritize the defense of their supply chain" and "reduce Russia's ability to conduct offensive operations, and further damage already dwindling morale."

In the north in Chernihiv, close to the Belarusian border, government officials reported that Russian bombs tore apart a key bridge Wednesday that was used to truck in humanitarian aid and evacuate residents. The battered city has drawn a comparison to the southern port of Mariupol, large parts of which have been reduced to rubble as its 100,000 remaining residents — less than one-quarter of its prewar population — struggle to survive without basic services.

Lyudmila Denisova, Ukraine's human rights ombudsman, said in a video that Chernihiv has "no electricity, water, heat and almost no gas," and that infrastructure has been "destroyed."

In the northeast near the Russian border, the second-largest city of Kharkiv shook overnight as a loud explosion was heard across neighborhoods. The regional governor, Oleh Sinegubov, told local media that the sound came from Russian missiles. Casualties were unknown.

"People do not leave bomb shelters almost around the clock," a statement from the Kharkiv regional police department said Thursday. Local officials said more than 500 people had died since the war began Feb. 24.

Midday Thursday, about 200 people who had emerged from shelters — some of which are subway stations — lined up outside the Archangel Michael church, southeast of the city center, for food and aid. At the Taras Shevchenko Monument near the center of Kharkiv, dozens of volunteers packed sandbags to pile around the statue to protect it from further bombardment. Shevchenko is a beloved 19th century Ukrainian poet and writer.

In the southeastern city of Melitopol, the mayor has accused Russian troops of taking "hostages." Ivan Fedorov, who was detained by Russian forces before being released in a prisoner swap, said Wednesday that his city was on "the verge of a humanitarian catastrophe." On Thursday, he said an aid and evacuation route was open between the city and Zaporizhzhia, a key junction for humanitarian corridors about 70 miles north, and posted photos of buses lining up.

In Lviv in the west, the flood of evacuees — mostly from eastern and southern Ukraine — continued apace. A train with hundreds of evacuees arrived at 1 p.m. at the central station after a 24-hour ride from Zaporizhzhia.

"We feel lucky to be alive," said Vera, 85, who was traveling with her friend Olga, 78. Both women declined to give their last names, citing concern for their safety.

They said they had been on the road for three days in cars, buses and trains from the port city of Berdyansk and passed several Russian checkpoints on the way out. In Lviv, they and others like them were given the choice to go to shelters or be transported to the Polish border, 40 miles west.

In his appeal for more help from the North Atlantic Treaty Organization, Zelenskyy said Ukraine's forces were on "unequal terms" with Russia's. "You can see the consequences today — the number of people killed, the number of peaceful cities ruined," he said.

He acknowledged that Ukraine was not a member of the 30-nation alliance and occupied a "gray zone" between the West and Russia. But he insisted that his nation was fighting for values held in common with NATO members.

NATO has doubled its troops in Eastern European nations in the last month but refused to impose a no-fly zone over Ukraine for fear of sparking a wider war. Notably on Thursday, Zelenskyy did not repeat his request for a no-fly zone.

The alliance agreed to send equipment to Ukraine to protect against chemical attacks, the use of which "would totally change the nature of the conflict," said Jens Stoltenberg, NATO's secretary general.

"This could include detection equipment, protection and medical support, as well as training for decontamination and crisis management," Stoltenberg said after the emergency summit in Brussels. He said NATO members were also focused on their own "preparedness and readiness."

The U.S. announced that it would take in 100,000 Ukrainian refugees and provide an additional $1.3 billion in aid to Ukraine and neighboring nations dealing with the growing refugee crisis. The promise nearly doubles the overall number of refugees worldwide that the U.S. previously said it would allow in this fiscal year. Officials said Ukrainians would immigrate via the nation's refugee admissions program as well as other avenues.

As the civilian death toll in Ukraine — more than 900, according to a conservative estimate from the United Nations — continued to climb, the U.N. General Assembly on Thursday overwhelmingly approved a resolution blaming Russia for creating a "dire" humanitarian crisis in Ukraine and called for an immediate end to the invasion and protection for millions of civilians.

Almost three-quarters of the assembly — 140 nations — voted in favor of the U.S.-sponsored measure, with only Belarus, Syria, North Korea and Eritrea joining Russia in opposing. There were 38 abstentions, including China.

The U.N. says that more than 10 million people have been displaced by the war, with 3.5 million fleeing the country, and that more than half of Ukrainian children have left their homes.

Moscow has denounced the proposed U.N. resolution as "anti-Russian."

With no end in sight to the fighting, the diplomatic and economic battle between Russia and Western nations has also intensified.

Biden landed Wednesday night in Brussels to begin a three-day European tour to strengthen European and American resolve in support of Ukraine and against Russia, which the U.S. on Wednesday formally accused of war crimes. His visit came as Moscow said it would expel some American diplomats in response to a similar move by the U.S. against Russian diplomats.

The U.S., which has joined Britain and the European Union in announcing multiple rounds of sanctions, said Thursday that it would sanction dozens of Russian financial businesses and state-owned defense companies as well as 328 members of the Duma, the lower house of Russia's parliament.

Russia, which has seen its economy tumble amid sanctions, on Thursday reopened its stock market for the first time since Feb. 25 — with extensive restrictions. Only 33 companies, which are all on the main Moscow index, were allowed to trade, and short selling was banned.

In a statement, Daleep Singh, the U.S. deputy national security advisor for international economics, called it a "charade" and a "Potemkin market opening."

McDonnell reported from Lviv, Kaleem from London and Jarvie from Atlanta. Marcus Yam in Kharkiv contributed to this report..