Skyrocketing energy costs showing up in bills for US bases, military personnel across Europe 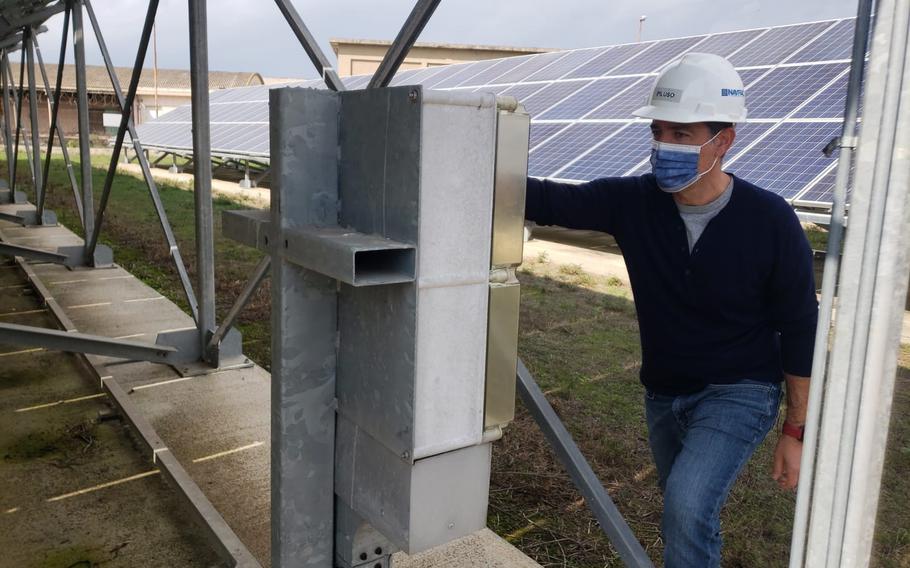 Antonino Piluso checks gauges on a photovoltaic system control panel at Naval Air Station Sigonella, Italy, in 2021. The base and the Sigonella military community are dealing with a steep rise in energy prices, which is inflating utility bills. (Maruyama Austin/NAS Sigonella)

NAPLES, Italy — U.S. military installations throughout Europe are estimating they will collectively pay at least $50 million more for gas and electricity in the next year, amid soaring wholesale energy prices exacerbated in some cases by a reliance on Russian natural gas.

Bases in Germany, Belgium and Italy expect to pay as much as double for electricity this fiscal year compared with what they paid last year. Gas cost estimates vary, but most bases expect a nearly 50% increase over the same time period.

The rising costs are already affecting some service members and Defense Department workers whose bills are coming close to exceeding their combined off-base housing and utility allowances.

The ceiling on costs remains uncertain as energy prices in Europe climb in the aftermath of Russia’s invasion of Ukraine. They were already rising because of low natural gas reserves, high demand and rising costs for carbon emissions.

With more than six months left in the fiscal year and uncertainty about how the war in Ukraine and economic sanctions on Russia will affect natural gas supplies, the base does not have exact figures, she said.

“Hopefully the volatility in the market will level off in the not-too-distant future, production will increase, and as we get into warmer months demand will lessen and rates will begin to come down again,” Woodbury Rama said.

Italy buys about 40% of its natural gas from Russia, the newspaper Corriere della Sella reported this month. If Russia were to reduce supply in retaliation for economic sanctions, prices could rise sharply, the newspaper reported.

Meanwhile, the European Union pledged last week to cut its dependence on Russian gas by two-thirds by the end of the year, which could allow other nations to sell gas at higher prices due to increased demand. 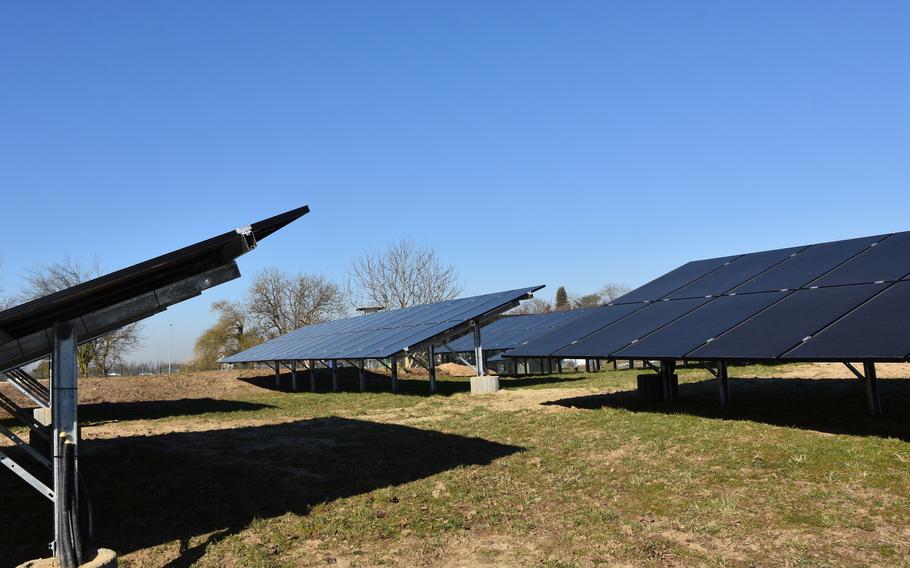 U.S. Army Garrison Wiesbaden installed a solar array to save on energy costs. But extreme price volatility is forcing Army garrisons in Germany to budget vastly higher sums for electricity and natural gas this fiscal year, according to Mark Heeter, a spokesman for the Army Installation Management Command — Europe. (Connie Dickey/U.S. Army)

If that estimate holds, the garrison will pay about $13.8 million and $7.2 million for electricity and gas, respectively, this fiscal year, Scavetta said.

In Germany, five U.S. Army garrisons that jointly contract for utilities expect to pay 44% more for electricity this year.

Last year, those five garrisons — Rheinland-Pfalz, Wiesbaden, Stuttgart, Bavaria and Ansbach — paid an estimated $71.6 million for electricity. This year, they will pay about $103.1 million, said Mark Heeter, a spokesman for the Army Installation Management Command–Europe.

Those same five garrisons paid about $6.6 million for natural gas during fiscal year 2021. This fiscal year, the estimate is about $9.7 million, a 47% rise, Heeter said.

The Navy could not provide figures for its other base in Italy, Naval Air Station Sigonella in Sicily, or for Naval Station Rota in Spain and Naval Support Activity Souda Bay in Crete. 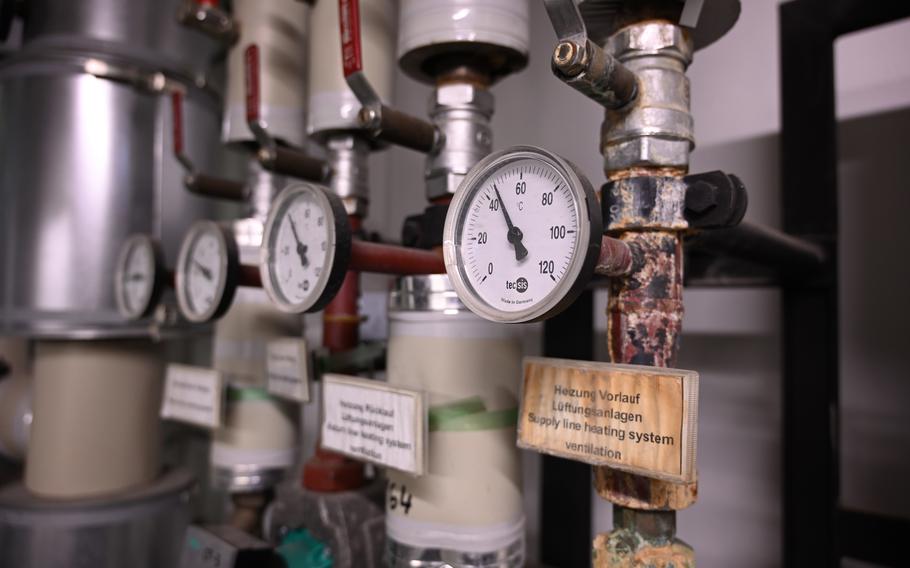 Meters track energy usage at U.S. Army Garrison Rheinland-Pfalz, which is headquartered in Kaiserslautern, Germany. Army garrisons in Germany are expecting to spend significantly more on electricity and natural gas this fiscal year because of dizzying price spikes in Europe. (Nicole Alberico/U.S. Army)

Bases aren’t the only ones feeling the pinch. Some active duty, civilian and other military community members, particularly in Italy and Germany, are being forced to cope with the strain on their budgets from the exorbitant rise in utility prices.

Petty Officer 1st Class Caroline Crumbacker, who is assigned to NSA Naples, was already trying to reduce her energy consumption.

Even so, her February bill for three months of electricity was 286 euros, or about $311, nearly $100 more than she usually pays.

Crumbacker’s monthly basic housing allowance from the Navy covers her expenses even with the dollar-euro exchange rate, she said. But if Crumbacker’s utility costs rise above the monthly amount she receives for rent, gas and electric and other services, such as internet, she would have to pay for the difference out of pocket.

While the Navy wouldn’t compensate her for the increased costs, it could readjust the housing allowance it gives to service members due to inflation or other factors, Crumbacker said. However, that readjustment likely would only happen on an annual basis, she noted.

“If my next bill is 500 euro or something, then I really am going to have to live in the dark,” said Crumbacker, who like other active-duty service members also receives a cost of living allowance designed to offset the higher costs of living overseas in some locations.

The Italian Regulatory Agency for Energy, Networks and Environment calculates that consumers like Crumbacker will pay at least 55% and 42% more, respectively, for electricity and gas during the first quarter of 2022.

For Emily Painter-Davis and her family, higher gas and electric costs mean that their housing and utilities allowance will be stretched even thinner.

It no longer covers rising rent and utility costs after the COVID-19 pandemic, said Painter-Davis, whose husband is retired from the Army and works as a contractor at NSA Naples’ Capodichino site, near Naples International Airport.

Likewise, their average electricity bill has climbed to about 350 euros, or $382, from 150 to 250 euros monthly depending on the season, Painter-Davis said. That’s with conservation efforts factored into the mix.

As a result, the family limits visits to restaurants and travel beyond the Naples area, she said.

“It really has put a damper on what we can do,” Painter-Davis said.

That pain also is being felt by other military families in Europe, such as those living near Ramstein Air Base and Landstuhl Regional Medical Center in Germany.

And in February, Naples and Sigonella posted notifications on their respective Facebook pages about impending utility price hikes and ways people could save on costs.

Naples received some responses to its post from community members about the rising prices, said Lt. Jamie Moroney, a spokeswoman for the base.

But she added that so far, no off-base residents have sought to move into base housing as a result of the increases in their utility bills.