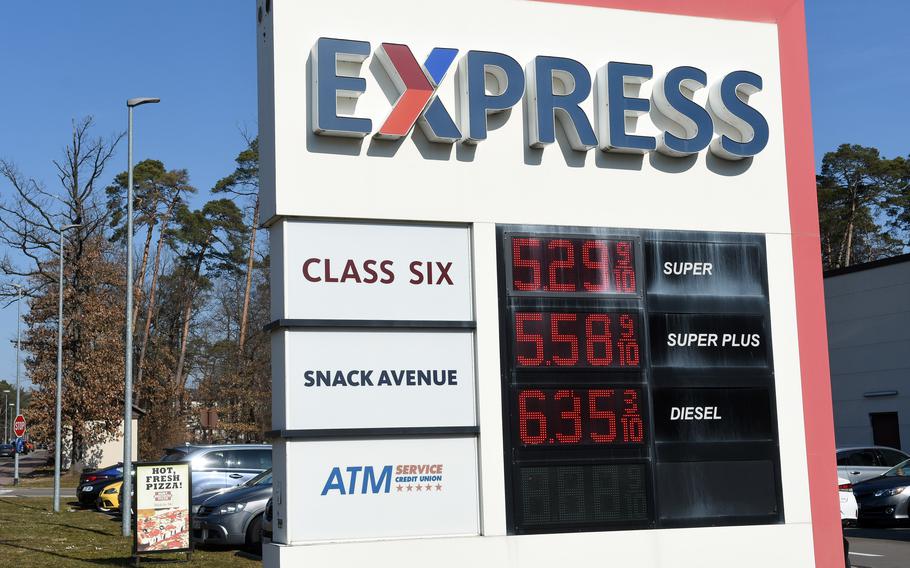 Gas prices at U.S. military bases in Germany went up by more than $1 a gallon Friday, March 11, 2022. Diesel saw the highest climb, topping out at over $6 per gallon. The Army and Air Force Exchange Service announced Friday that it may adjust prices as often as daily, instead of weekly, due to the volatility in the global energy market following Russia's new invasion of Ukraine. (Jennifer H. Svan/Stars and Stripes)

RAMSTEIN AIR BASE, Germany — American personnel overseas are paying a lot more for gas amid record-high prices across much of the U.S. in the wake of Russia’s invasion of Ukraine.

The cost of gas at U.S. bases in Germany soared by more than $1 a gallon Friday, following an Army and Air Force Exchange Service announcement that fuel prices may be adjusted as often as daily instead of weekly.

The measure, AAFES said, will allow it to adjust prices more quickly “as market conditions improve,” while also “protecting dividends” generated for quality-of-life programs for service members and their families.

A portion of the company’s earnings supplements Morale, Welfare and Recreation programs on U.S. bases.

AAFES typically releases a price update for its gas stations in Europe every Thursday. This week’s message instead read: “Due to the recent volatility in the global markets, The Exchange is unable to provide weekly updates regarding fuel pricing.”

Fuel prices had steadily been rising over the last month in Europe but only incrementally. 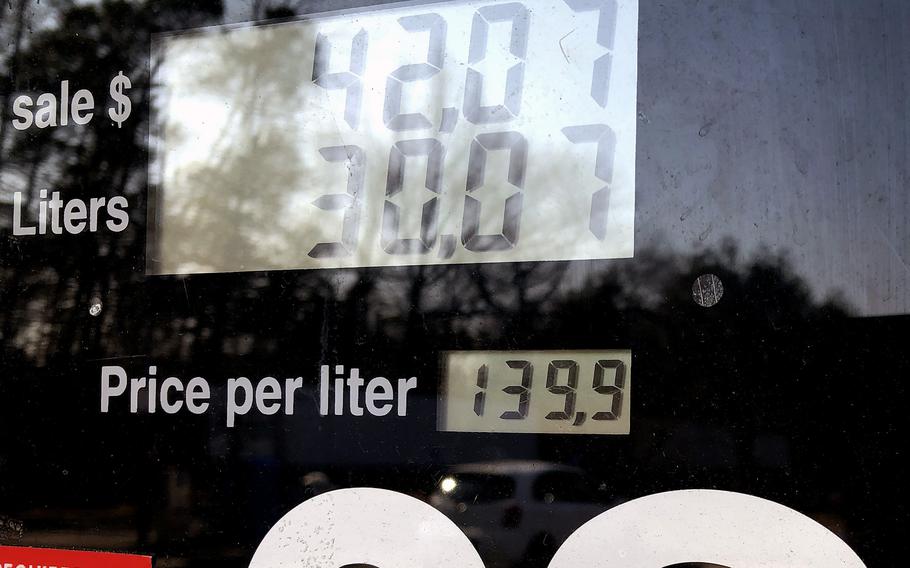 Thirty liters of gas, or about 6.6 gallons, at the Exchange gas station on Ramstein Air Base, Germany, cost $42.07 on Friday, March 11, 2022. Gas prices at U.S. military bases in Germany went up by more than $1 a gallon Friday in the wake of Russias new invasion of Ukraine. Diesel saw the highest climb, topping out at over $6 per gallon. (Jennifer H. Svan/Stars and Stripes)

AAFES bases its overseas fuel prices on the U.S. Energy Department’s weekly average for each grade of gas in the continental United States. “Unique incremental costs” incurred in each overseas market are added to the average, according to AAFES.

While gas stations in Germany are affected now, prices in other countries are being reviewed and will adjust as the market requires, said Julie Mitchell, AAFES vice president of marketing and customer engagement.

The company purchases fuel daily as deliveries come in, up to three times a day in some locations, Mitchell said.

“The Exchange is providing fuel services at cost and purely as a community service at locations requiring daily price updates,” she said.

At Ramstein on Friday, civilian spouse and retired service member Rick Roberts paid $60 for half a tank of gas, about twice as much as he typically pays, he said.

“Since we don’t buy gas from Russia, I don’t know why our gas prices are going up so much,” he said.

Analysts say the reduction in global supply from sanctions on the Russian energy sector is driving up prices worldwide.

Roberts has no immediate plans to curtail driving, though.

“We’re going on a road trip” this weekend, he said.

“I really don’t even look at the prices,” he said with a laugh. “I look at it as a necessary expense.”

Even with the increase, gas is still cheaper from AAFES than off base, where prices are also climbing.

In Kaiserslautern, the average price per liter for super unleaded Friday was 2.19 euros, or about $2.41. For a gallon, that equates to about $9.12.

Stars and Stripes reporters David Edge and Michael Abrams contributed to this report.