In a war of terrible choices, these are the fighting-age men who left Ukraine 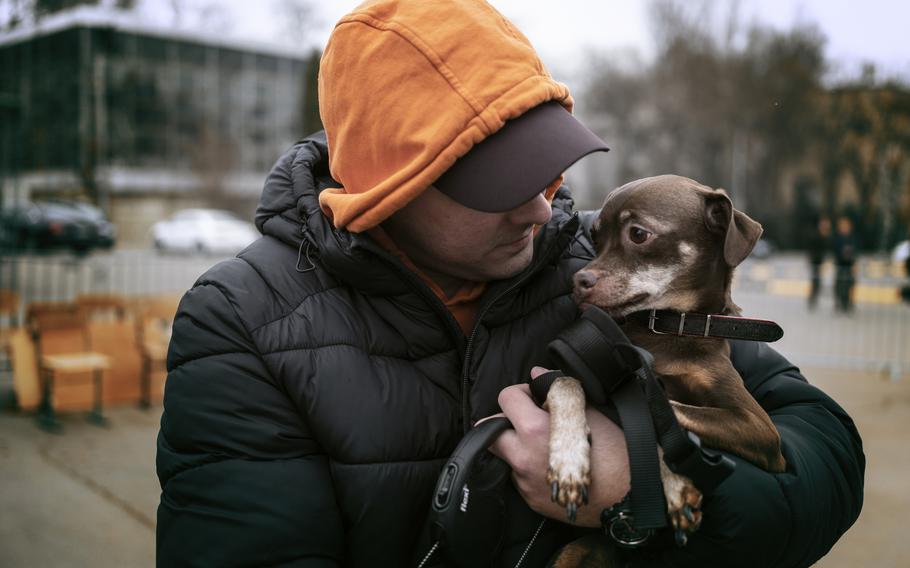 CHISINAU, Moldova — He drove the final miles toward Ukraine's border bracing for the possibility that he was spending his last minutes with his family. Dmitri Alexeev, 34, told his two children he'd probably be prevented from leaving by Ukraine's border guards. His daughter, 12, said she didn't want to be separated. Alexeev could scarcely choke out another word until the checkpoint, when he handed over a medical slip noting a head injury he sustained as a child. A Ukrainian guard looked at the document.

And the next moment, Alexeev was in Moldova, still with his family, one of the rare men who made it out.

Rather than returning to a war zone, he was ushered by a volunteer to the Moldovan capital, where two days later, he was awaiting a bus ride toward Germany, his daughter nestling into his elbow, as he tried to describe everything he was feeling: fortune, relief, shame.

"I feel guilty," Alexeev said, "because we are safe."

The historic stream of refugees from Ukraine — 2 million people in two weeks — is overwhelmingly composed of women and children, who have been forced to separate from husbands and fathers, in one of the most excruciating aspects of this war. Most Ukrainian men ages 18 to 60 have been banned from leaving the country, in anticipation that they may be called to fight. Their president has modeled that to stay is heroic.

But the martial law aimed at bolstering the resistance is not absolute. There are exemptions — fathers with three or more children can leave, as can people with medical issues. There are also ways to sneak out: bribes to border guards, furtive dashes through unattended parts of the border. What's clear, among the men who escaped, is that their decisions have had the capacity both to save them and shatter them. A recreation center in Chisinau, Moldova, is being used to host refugees from Ukraine. (Gianmarco Maraviglia/The Washington Post)

"I left everything behind — my work, my home, everything I gained in life," said Kerimov Dzhakhanhir, 48, who woke up Tuesday to see a message from a friend back in Kyiv, texting from a bomb shelter. Who was luckier? His friends were still in the war; he was on a tiny refugee center cot that he'd shared with two of his five children.

"People are so scared and lost," said Dzhakhanhir, who was born in Azerbaijan but has Ukrainian citizenship. "Nobody knows what to do."

In interviews across Moldova, 10 Ukrainian men described making it here through all sorts of means. One 38-year-old said he fled Odessa with his family in the first hours of Russia's invasion, making it out of the country before Ukraine imposed martial law — only to later feel so ashamed that he began volunteering to help subsequent refugees. Others, like Alexeev, said their ability to make it out perhaps had depended on nothing more than the person manning the Ukrainian exit booth. Alexeev said he has recurring headaches because of the injury. But he hadn't been sure his document would suffice.

"I can only understand it as fate," he said. "I was ready to be turned around. Instead, me, my family, we'll be together for everything."

Some men said they took exit routes that were illegal. At a refugee center in Chisinau, one man lowered his voice to a whisper to confide that he'd joined a group of Jews that he said was organized by a rabbi in Kyiv. People paid between 2,000 and 7,500 euros, he said. The men spread out and tried to cross the border. Only some made it over. 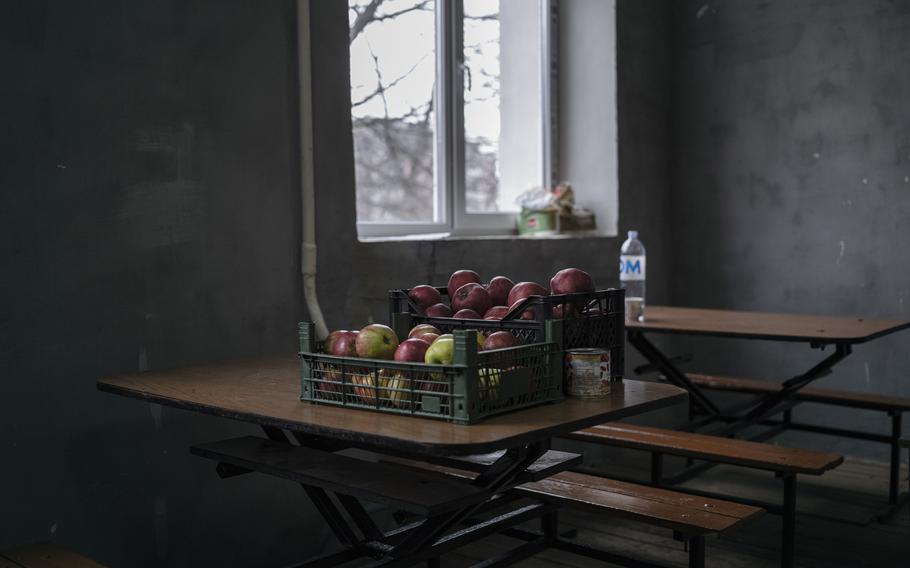 Apples and water at a military base in Chisinau, Moldova, that is housing refugees from Ukraine. (Gianmarco Maraviglia/The Washington Post)

In the same center — a rickety army barracks of bunk beds, with a decommissioned tank out front — other men described how a bus had deposited them near an open field separating Ukraine and Moldova. A 24-year-old from Kyiv, speaking on the condition of anonymity to describe what he suspected was an established smuggling route, said he figured getting caught by Ukrainian guards would mean interrogation, and potentially being conscripted into the war. To him, the notion of trying to flee illegally was staggering — but no crazier than what had happened in his country, or the thought of picking up a weapon. Just two weeks earlier, he'd been a medical student.

So he ran through a field and then a forest, "scared s---less," he said, until he and the others ended up on a cold road in what happened to be Moldova. Local border police arrived, he said, and assured the Ukrainians they wouldn't be sent back. The medical student received papers giving him the legal right to be in Moldova. There's just one thing missing: a Ukrainian exit stamp.

A Poland-based spokesman for the United Nations' refugee agency said that among the new arrivals, Ukrainian men of military age were "very uncommon." But Oleg Palii, the director of a Moldovan legal group that deals with asylum cases, said Moldova has seen plenty of men — including cases involving bribes or people darting across open parts of the border. He said that one night this week, in the Moldovan border town of Palanca, "it was only men passing through."

Andriy Demchenko, a spokesman for Ukraine's state border guard service, said that people between the ages of 18 and 60 who don't have permission to leave — and who come to official border crossings — are simply turned back. He said those who cross illegally face fines if caught and are "recommended to the local recruiting station."

In Chisinau, at the army barracks, a 32-year-old IT employee from Kyiv said he and his father, 57, had managed to cross without any problems. They presented non-Ukrainian passports. The catch is that in Ukraine, dual citizenship is illegal. The 32-year-old said he had talked with his dad at length about whether they were doing the right thing, and they agreed that war had forced them into a terrible, cold decision: picking their own interests above those of their country.

"I don't feel like a traitor," the son said.

He said it was natural to choose self-preservation.

He asked: Why do you think NATO countries aren't entering the fight and defending Ukraine? 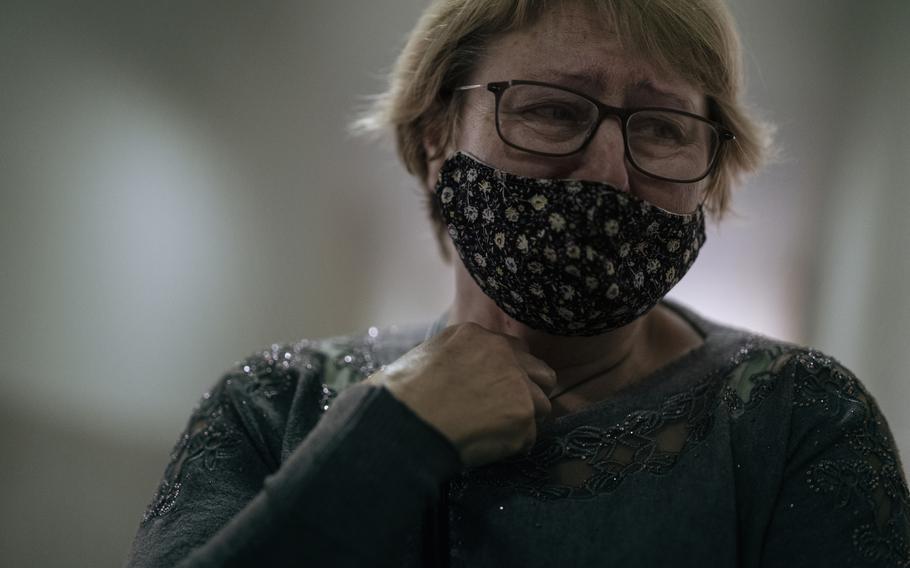 Svetlana Mihailenko left a son behind who chose to stay and fight for Ukraine in Odesa, but she said she does not judge the men who left the country. (Gianmarco Maraviglia/The Washington Post)

The alternate path — staying behind in Ukraine, fighting — was easier to envision for Svetlana Mihailenko, a 62-year-old grandmother in a lace sweater who arrived at the army barracks with no family at all. She said her "whole life, and her very soul," had been left behind in Odesa: two grandchildren, her daughter-in-law and her 34-year-old son. They'd chosen to stay together. And her son had joined the local defense unit.

"He was a PR employee before the war," she said.

Mihailenko had a place to go — to a daughter in London — but this way station in Moldova struck her as impossibly sad, a place where any conversation with other refugees would lead to tears. She slept on a bunk bed, waited for a visa to Britain and occasionally received a text message from her son: "Everything is fine, please don't worry," he said.

She noticed that all around her were men. Men the age of her son.

"I don't judge. They will have to live with their choices," she said. "Even I feel like I ran away."

One floor above her, occupying a corner bunk bed in a vast room, was a man who said he hadn't wanted to run away. Several days earlier, Alexander Omelchenko had drawn up a plan with his friends that would help their fiancees, wives and children get to safety. The men would usher the women and children to the Ukrainian border. And Omelchenko would briefly shepherd them to Moldova's capital before turning back. He could accompany them on that last leg for a simple reason: Though he identifies as Ukrainian and loathes Russian President Vladimir Putin, he was born in St. Petersburg. He has a Russian passport.

"That was my ticket in," Omelchenko said.

The plan, though, quickly went awry. He said when he tried to reenter Ukraine — thinking he would return to Kyiv and defend his property — border guards didn't let him pass.

"I could read their faces that they hate me," he said.

He felt the options around him collapsing. He could fly to Russia, but that would amount to a betrayal of his values, his fiancee and her 13-year-old daughter from an earlier relationship. He could stay in Moldova, but for what? His fiancee had already moved on to Romania, where he'd heard Russian citizens were also having a hard time entering.

He spent one night at the army barracks, then another. He'd worked in Kyiv as an electrician and had $100 to his name. His friends were trying to negotiate with Ukrainian authorities so he could reenter. But all the while, Omelchenko kept thinking about the pure brutality of families separating. He'd seen his friends say goodbye to their wives and children at the border — a scene that so haunted him, even several days later, that he had to pause, get a drink of water and exhale twice before recounting it as his eyes welled.

"I'd never seen them cry before," he said. "They cried so hard."

There were bureaucratic obstacles in either direction, but he now knew his preference. He said he'd choose reuniting with his fiancee and daughter over returning to Ukraine.

The Washington Post's Veronica Pisarenco in Chisinau, Moldova, and David Stern in Mukachevo, Ukraine, contributed to this report.