Ukraine wants a no-fly zone; why do the US and NATO reject the idea? 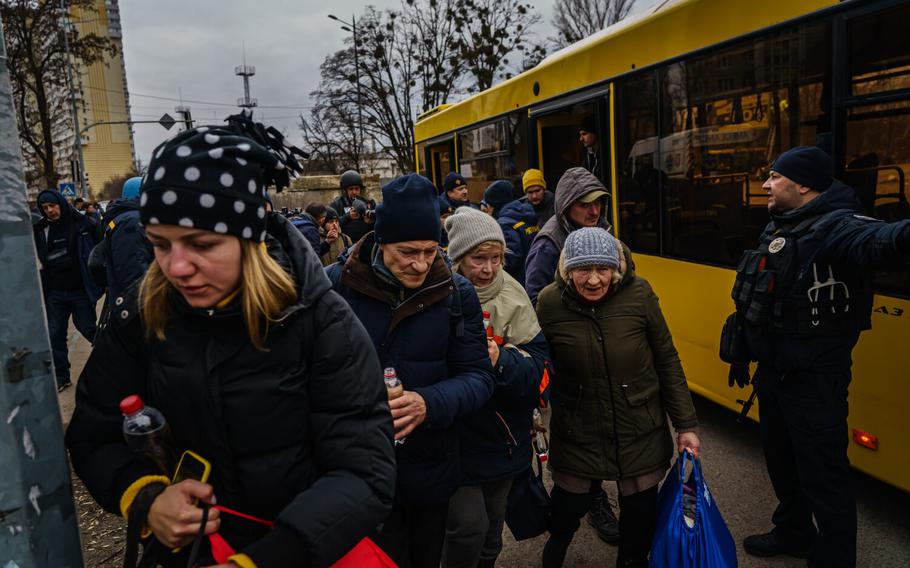 (Tribune News Service) — As persistently as Ukrainians demand a no-fly zone to protect them from Russia, the U.S. and NATO just as steadily insist it can’t be done.

The calls for a no-fly zone frame it as existential: protecting millions of desperate Ukrainian civilians trapped in besieged villages from the might of Russia’s air force and its arsenal of cluster bombs. The pleas became more urgent when Russian forces attacked and captured Europe’s largest nuclear power plant, located in southern Ukraine and one of several scattered around the country.

Yet leaders including President Biden and NATO Secretary-General Jens Stoltenberg have repeatedly turned aside the pleas from Ukrainian President Volodymyr Zelensky, populations throughout Europe and even some U.S. lawmakers.

“All the people who die from this day forward will also die because of you, because of your weakness,” Zelensky said bitterly last week, addressing leaders who again opposed military restrictions of Ukrainian airspace. “The alliance has given the green light to the bombing of Ukrainian cities and villages by refusing to create a no-fly zone.”

Why are so many Western officials so adamant?

A no-fly zone, many Western officials say, say, would draw the U.S. and its NATO allies into direct combat with Russia, as fighter pilots from the two sides in theory would try to shoot each other down — an escalation that many liken to a world war, one involving two major nuclear powers.

“The only way to implement a no-fly zone is to send NATO fighter planes into Ukrainian airspace, and then impose that no-fly zone by shooting down Russian planes,” Stoltenberg said. “We understand the desperation, but we also believe that if we did that, we would end up with something that could end in a full-fledged war in Europe.”

In one scenario that some analysts have raised, a U.S. or NATO fighter jet would find itself in the position of firing on a Russian transport aircraft dropping paratroopers onto the battlefield. The Russian death toll in such a case would not be limited to the relatively few members of a crew but could include possibly dozens of soldiers.

It’s even more complicated than that. To enforce a no-fly zone, air combat missions would have to be supported by ground-based operations that provide intelligence, targeting guidance and other information. These could be set up in Poland or other NATO countries in the vicinity, or possibly from aircraft carriers offshore, but it represents another level of involvement.

And the U.S. and its NATO allies would also have to be prepared to go in over land to rescue downed pilots and perhaps take out anti-aircraft weapons within Russian or Belarusian territory.

At least initially, “it would be a one-sided fight because U.S. and NATO airpower has a marked advantage,” said Alexander Downes, co-director of the Institute for Security and Conflict Studies at George Washington University. “But the risk is escalation. It’s a slippery slope from there to a shooting war.”

What about a limited no-fly zone over, say, a humanitarian corridor for fleeing Ukrainians? “No,” was the one-word answer from a senior U.S. Defense official on Monday.

Later, Pentagon spokesman John Kirby described the state of play in the skies over Ukraine. Russia has yet to establish air superiority over the entire country, he said.

Russian forces are increasingly using “long-range fires” with ballistic missiles, cruise missiles and even artillery launched from the air, the ground and ships and submarines in the sea, Kirby said. They claim a mounting number of civilian lives.

Russian President Vladimir Putin has already warned against aggressive U.S. or NATO actions; even economic sanctions, he says, are tantamount to a declaration of war.

And late last month he told Russia’s military to place nuclear forces on “high combat alert.” The U.S. has not changed its alert level, with the Biden administration accusing Putin of “manufacturing threats.”

Still, momentum for a partial protection of the airways is growing. A group of foreign policy experts, including many former U.S. government officials, stated in an open letter released Tuesday that a “limited” no-fly zone executed by the U.S. and NATO allies over humanitarian corridors delivering aid and allowing people to escape was not only possible but imperative.

“ NATO leaders should convey to Russian officials that they do not seek direct confrontation with Russian forces, but they must also make clear that they will not countenance Russian attacks on civilian areas,” the letter states.

In theory, Russia has agreed to allow such protection for humanitarian corridors, but trust in Moscow’s promises and intentions is at a low point.

Is there a history of successful no-fly zones?

Some military historians point to the controlled skies over Iraq in the 1990s in connection with the first Gulf War.

But the architecture was substantially different from Ukraine’s situation. In the 1990s version, the zone was set up not between two warring superpowers fighting each other but among numerous countries working more or less in concert to contain a common enemy, Iraq, and prevent it from flying its aircraft.

A rare congressional voice in favor of a no-fly zone surfaced over the weekend. Rep. Adam Kinzinger, a Republican from Illinois and a former Air Force combat pilot, said it was urgent to stop Putin now before his takeover of Ukraine is irreversibly entrenched.

“There’s risk,” he said on CNN. “We obviously look at that with eyes wide open. But I think there’s risk in inaction.”

His fellow Republican, Sen. Marco Rubio of Florida, sided with the naysayers.

“A no-fly zone has become a catchphrase,” he told ABC. “I’m not sure a lot of people fully understand what that means. It’s not some rule you pass that everybody has to oblige by. It’s the willingness to shoot down the aircrafts of the Russian Federation, which is basically the beginning of World War III.’

For now, the U.S. strategy is to send large amounts of weaponry into Ukraine — a $350-million tranche is being delivered now — that will aid Ukrainians in defending themselves.

“Most of the damage being done is by artillery and rocket fire, not by the Russian Air Force. So an NFZ, which I originally supported, will not solve the problem, yet it brings all the risks of escalation,” retired U.S. Lt. Gen. Ben Hodges, former commanding general of the U.S. Army in Europe, told The Times.

“We want to get the UAF [ Ukrainian Air Force] the capability to knock down drones and helicopters,” he said. “We should be looking for longer-term solutions.”

Even as the U.S. increases the amount of weaponry it sends to Ukraine, it must do so without appearing to be directly involved in the war. How Putin assesses that participation is another question, said Downes, of the Institute for Security and Conflict Studies.