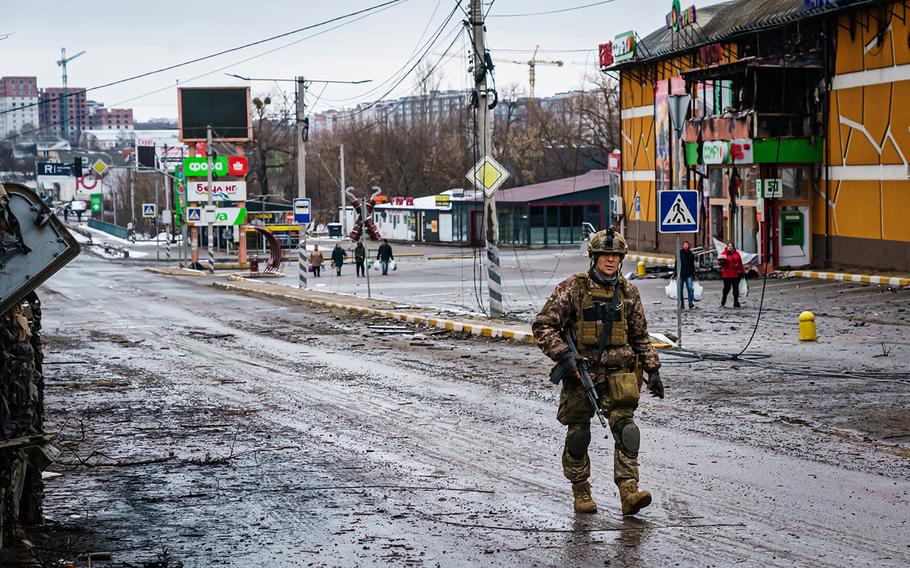 A Ukrainian soldier walks past a building that was destroyed in the midst of battle with the Russians, on the outskirts of Irpin, Ukraine, Tuesday, March 1, 2022. (Marcus Yam, Los Angeles Times/TNS)

(Tribune News Service) — After five days of fierce fighting, Russian forces escalated attacks on Ukrainian cities Tuesday, bombarding apartment and government buildings, the main TV tower in Kyiv, the nearby Babyn Yar Holocaust memorial and the main square in the second largest city, Kharkiv. A convoy of hundreds of Russian tanks was heading to join the fighting in Kyiv, the capital.

“In Chechnya and Syria, Russia used indiscriminate terror bombing. Nothing tactical about it. It’s about scaring people and getting them on the road so they become refugees and somebody else’s problem,” said retired Air Force Gen. Philip Breedlove, who was NATO’s supreme allied commander in Europe from 2013 to 2016. “... This is the ugly truth: It’s going to last until Mr. Putin accomplishes his objectives or the Russian people rise up to stop him.”

What was Russia’s military strategy when it invaded Ukraine?

It appears Putin expected Russian forces to enter Ukraine through friendly, separatist areas such as the Donbas in the southeast, then quickly take the capital.

“The plan was to go in and seize the low-hanging fruit in Donbas, in the east, then expand, linking Donbas to the Crimea and launch a pincer movement on Kyiv,” said Evelyn Farkas, former deputy assistant secretary of defense responsible for Russia, Ukraine and Eurasia under President Obama.

“The plan on paper looked good, but in execution it turned out to be surprisingly inept,” Farkas said.

Logistical problems surfaced almost immediately. Military trucks could be seen running out of gas or breaking down.

“They sent their forces out without adequate supplies along what the military calls a ‘long line of operation,’” Farkas said. “… The supply issue is going to continue to plague them — clearly they don’t have a handle on their logistics.”

Breedlove, the former top commander of the North Atlantic Treaty Organization, noted that when Russia invaded, most of the Ukrainian army was guarding separatist regions in the southeast — Donetsk and Luhansk. Those forces are fixed and can’t shift north and south as Russia attacks.

On Tuesday, Russian forces seized control of several strategic areas along the coast, including Mariupol, a major port for agricultural exports.

“Now Russia holds all the ports of Ukraine and it is essentially a landlocked nation,” Breedlove said.

“We’ve seen videos of Russian prisoners who say they don’t know what they were sent to do; that they were not told they were being sent to Ukraine or why,” Farkas said. “The Russian military has multiple problems.”

She said it’s unclear what’s happening to the bodies of Russian soldiers who are killed in action, and that could influence morale in the field and back home. There have been reports that fallen Russian soldiers are being cremated.

“Ukrainians are taking pictures of those bodies and putting them on [the messaging app] Telegram and saying, ‘Is this your son?’” she said.

Farkas has seen reports of Ukrainians offering monetary rewards to Russian soldiers who surrender, along with the promise that they will not be branded war criminals. Ukrainian Defense Minister Oleksii Reznikov, in a Facebook post, has offered 5 million rubles, about $48,000, to those who do.

All of these factors could damage Russia’s ability to fight a protracted war, Farkas said:

Russia is a nuclear power and modernized its military in recent years, but its focus has been nonprecision weapons, Farkas said.

“That’s why you are seeing these old vehicles going into Ukraine. They still have one decrepit air carrier. They did a selective modernization.”

What Putin was trying to do was develop these very lethal modern weapons, she said, to “send political signals.”

“They are not using precision weapons from what I’m seeing,” Farkas said of Russian forces in Ukraine.

Instead, Russians have cluster-bombed civilian areas, a move that has outraged and galvanized Ukrainian volunteers.

“Yes, they have firepower, but they use that firepower at their peril,” Farkas said of the Russians.

Is the Ukrainian military response surprising?

“On the one hand I’m not surprised, because for eight years we have been training and equipping them,” Farkas said. “You see the Ukrainian military doing what they were trained to do: They are hitting the tanks with the Javelins, shooting down Stinger” missiles.

“What is surprising is the esprit de corps,” she said.

Farkas likened the surge of military volunteers to Finnish and French resistance during World War II.

“That’s how deterrence works. That’s how you get a bully to back down,” she said. “… Sometimes defiance can be more powerful than the biggest weapons.”

“He assumed Ukraine would fall in a matter of days,” she said, noting Moscow’s strategy of attacking, then pausing instead of staging waves of offensives. “That speaks to the level of preparedness.”

When Russian forces headed for Kyiv, she said, they brought empty paddy wagon-style vehicles armed with nothing larger than AK-47s.

“They thought they were going to roll into Kyiv, arrest the Ukrainian elite and ship them back to Moscow,” she said. “They were destroyed.”

“They’re experienced, they know their home terrain and this is existential for them,” Haring said.

So what’s the Russian military’s next move?

“This line of tanks that we’ve all been looking at that’s very close to Kyiv: Why hasn’t it made any advances in the last 24 hours? It looks like the Russians are running out of fuel and maybe rethinking their strategy,” she said.

“Even if they take Kyiv, they’re not going to be able to hold it.”

In order to hold the city of 3 million, Russian forces will have to advance through a warren of narrow streets.

“I don’t like driving there, let alone in a tank,” Haring said. “Resistance is going to be fierce.”

She noted that during the Chechen wars in the 1990s, Russian forces laid waste to the capital, Grozny. Some estimate that up to 100,000 civilians were killed. At the time, Putin led Russia’s spy agency, the successor to the Soviet-era KGB, and became prime minister at the tail end of the conflict in 1999.

“He showed no remorse. He went after everything,” Haring said.

In Ukraine, she said, “they’re concluding right now that they’re going to have to use a much heavier hand and inflict mass casualties, in Kyiv in particular. That means indiscriminate bombing.”

“They aren’t as precise, they haven’t invested in those technologies because they just don’t care about collateral damage,” said Collins, who helped train Ukraine’s military with Gen. John Abizaid from 2016 to 2018.

Collins wasn’t sure whether to expect Russians to raze Ukrainian cities or surround them.

“But if they get into a city, it’s going to be a brutal fight with all these [Ukrainian] volunteers. Urban warfare is always brutal,” he said. “You need hundreds of thousands of forces if you really want to own that city. Cities soak up troops.”

Breedlove said forces were headed south from Belarus on Tuesday to cut off Ukrainian forces at the Polish border.

“It’s going to be extremely hard for refugees to get out,” he said.

The retired general noted there were allegations Tuesday that Russia had violated the Geneva Convention by deploying banned weapons: cluster bombs and a fuel air explosive called a “vacuum bomb.”

“There are pictures of them moving into Ukraine so we know the Russians have them,” he said, although it was unclear whether they had been used.