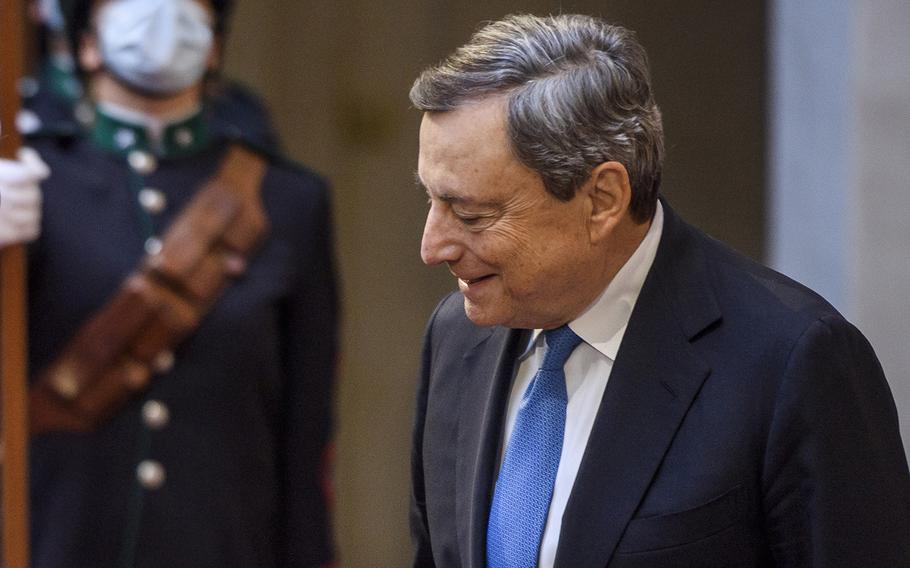 Italian Prime Minister Mario Draghi is seen in Rome on Oct. 29, 2021. According to reports on Saturday, Feb. 26, 2022, Draghi had no knowledge of a meeting in which senior Italian and Russian officials met to discuss potential business investments worth hundreds of millions of euros just over a week before Moscow invaded Ukraine. (Antonio Masiello/Getty Images/TNS)

Talks in Moscow included a possible partnership between Genoa-based Ansaldo Energia and Russia's NordEnergoGroup, according to the people, who asked not to be named disclosing private negotiations.

Rome-based energy firm Enel SpA's plan to invest in Slovenske Elektrarne with Russia's Sberbank, which has been financing the Slovak utility for decades, was also discussed, the people said. Other topics included a 200 million euro ($225 million) investment from aluminum group Rusal in a plant it owns in Sardinia and a recent accord between mining-technology companies.

When the talks took place Russia was repeatedly denying that it would invade Ukraine, but now that it has done so they appear unlikely to proceed.

Italy, which had been cautious on the toughest measures in response to the attacks, already has significant Russian commercial ties, with trade between the countries worth more than 21 billion euros last year, according to Italy's trade agency. The country also imports about 45% of its gas consumption from Russia, one of the highest shares in the European Union.

The talks in the week beginning Feb. 14 came after a group of Italian business leaders attended a meeting with Russian President Vladimir Putin at the end of January, despite a request from Draghi's office that it be canceled due to the geopolitical situation. Among attendees was Enel Chief Executive Officer Francesco Starace, who is also the brother of Italy's ambassador to Moscow.

Bloomberg News has previously reported on documents showing European nations have sought exemptions for energy-related deals from financial sanctions over Ukraine, and raised concerns about targeting sectors sensitive to their economies, though Italy denies seeking exemptions.

While positions have changed since the invasion, measures introduced so far by the U.S. and the EU remain limited. Momentum appeared to be shifting toward stronger steps over the weekend, however, with the Italian government saying Saturday it would back any EU decision to eject Russia from the SWIFT international payments system.

Ansaldo has been seeking for months to sell large gas turbines to Moscow, which has limited production capability of its own, in return for favorable commercial conditions, one person said, but previous talks failed because Russian law requires some parts to be made locally. Another person said that negotiations remain slow.

Proposed partner NordenergoGroup, which also declined to comment, is owned by billionaire Alexei Mordashov, whose business Power Machines was sanctioned by the U.S. for supplying turbines to Crimea after Russia annexed the peninsula in 2014.

Participants at the Moscow meeting also discussed the potential for Italian businesses in Russia more broadly, the people said. Italy is currently Russia's seventh-biggest market and the 14th biggest for imports, according to the latest foreign ministry data.