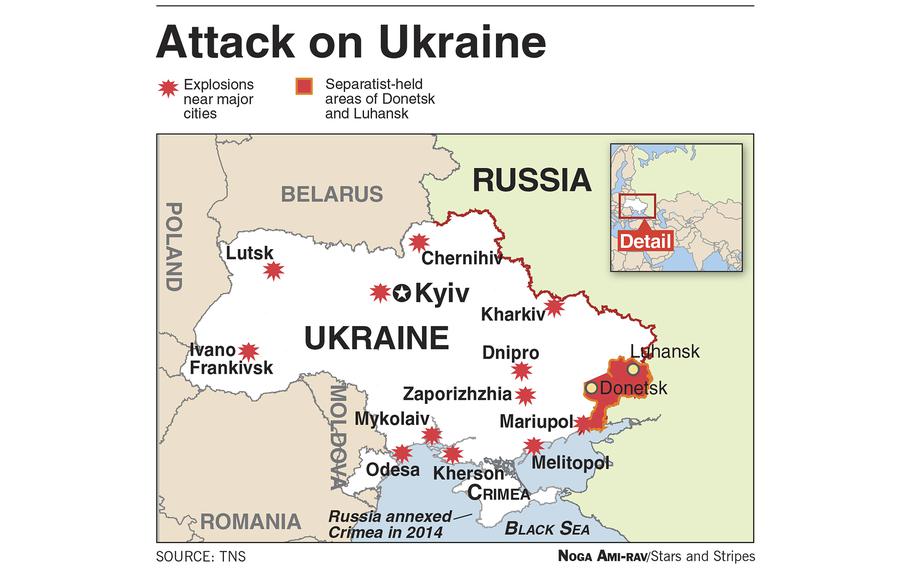 “It is our assessment that Russian President Vladimir Putin was prepared to go in big and threaten Kyiv [Ukraine’s capital],” a U.S. Defense Department official said Thursday, Feb. 24, 2022. “The indications we’ve seen thus far in just these first not even 12 hours are keeping with our assessment earlier that it would be his goal to decapitate this government.” ()

WASHINGTON – U.S. intelligence suggests Russia aims to overthrow the pro-Western Ukrainian government as its military launches a full-scale invasion including more than 100 missile launches into the country, a senior defense official said Thursday.

“It is our assessment that Russian President Vladimir Putin was prepared to go in big and threaten Kyiv [Ukraine’s capital],” the official told Pentagon reporters Thursday. “The indications we’ve seen thus far in just these first not even 12 hours are keeping with our assessment earlier that it would be his goal to decapitate this government.”

Russia began making “early moves” toward Kyiv on Thursday morning, said the official who spoke on condition of anonymity. The U.S. estimates Russia launched more than 100 various missiles during the initial onslaught into the country, including short- and medium-range ballistic missiles, cruise missiles and surface-to-air missiles.

“They did this beginning at 9:30 p.m. EST last night when we observed missiles being fired from both land- and sea-based platforms impacting key cities in central and eastern Ukraine,” the official said.

The Russian Defense Ministry on Thursday said it had destroyed 83 Ukrainian military facilities after launching air and missile strikes on Ukrainian forces. Later, the ministry said its ground forces had crossed into Ukraine from the Crimean Peninsula, which Russia annexed during its last invasion of Ukraine in 2014.

The defense official could not provide a casualty count in Ukraine as of Thursday morning but said civilian and Ukrainian troops’ lives might have been lost already.

“When you start launching more than 100 ballistic missiles, it’s of concern that innocent life could be taken,” the official said.

The heaviest fighting between Russian and Ukrainian forces is happening in Kharkiv, but other combat is occurring throughout the country Thursday, including near the civilian airport in Kyiv, the official said.

The invasion comes days after the Russian parliament recognized the independence of the breakaway eastern Ukrainian regions of Donetsk and Luhansk and later authorized Putin‘s decision to deploy troops abroad.

Russia claims the invasion is part of a “peace-keeping mission,” but it comes after the country has been steadily amassing more than 150,000 troops along Ukraine‘s borders with Belarus and Russia during the past three months.

U.S. and NATO partners for months have been attempting diplomatic negotiations with Putin, who in December demanded that NATO bar Ukraine from any future membership in the alliance and remove all troops and military equipment from countries that joined NATO during the past 25 years, such as Poland and Romania.

NATO members, including the U.S., have refused these requests.

U.S. officials from the Pentagon, White House and State Department for weeks have said there was still time for a diplomatic resolution up until a Russian invasion occurred.

Since the invasion began overnight, there has been “no direct communication” between Russian and U.S. defense leaders,” the officials said.

On Thursday, Biden ordered the deployment of approximately 7,000 additional U.S. service members to Europe. This would comprise an armored brigade combat team with associated capabilities and enablers, according to the Pentagon. The troops will deploy in the coming days to Germany to reassure NATO.

The U.S. already has approximately 8,700 troops in Poland assisting police forces, about 4,700 of whom were deployed from Fort Campbell, Ky., and Fort Bragg, N.C., during the past three weeks.

In that same period, the U.S. moved 1,000 troops to join the 900 American troops already stationed there on a rotational basis and 300 to set up a joint force headquarters in Germany.

On Tuesday, President Joe Biden also ordered an infantry battalion task force of about 800 US soldiers in Italy to move to the Baltic region after Russia refused to withdraw its forces from Belarus. An attack aviation battalion of 20 AH-64 helicopters from Germany will also join them.

Biden has repeatedly pledged not to send U.S. troops into Ukraine to fight Russia but maintains he is committed to supporting NATO ally countries.