Putin may go to war to capture Ukraine; with Belarus, he did it without firing a shot 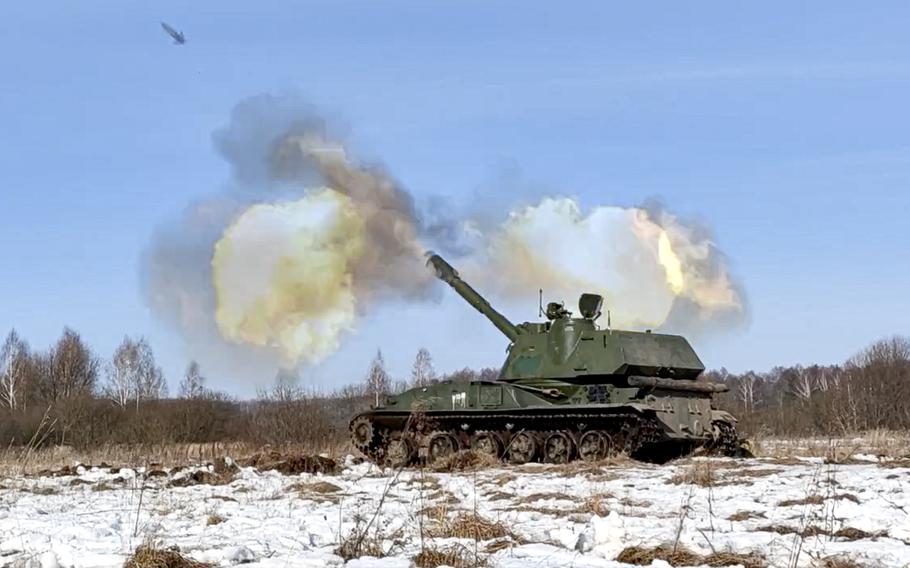 MOSCOW — Belarus announced Sunday that Russian forces would remain in the country after massive military drills ended, in a move that opposition figures said surrendered the country’s independence to Moscow without a shot being fired.

Exiled opposition leader Svetlana Tikhanovskaya said it undermined the country’s security and sovereignty, dragging it into a foreign war as an aggressor.

Belarusian Defense Minister Viktor Khrenin announced that joint drills would continue after the end of massive joint military exercises with Russia on Sunday, citing “the aggravation of the situation” in eastern Ukraine.

The announcement runs contrary to earlier pledges from Minsk officials that Russian troops would go home when the drills ended.

Khrenin said the two countries would “fight back” if necessary, in a move analysts said showed that Belarusian President Alexander Lukashenko’s foreign and military policies had been effectively captured by Russia.

“It is just a sign that the current government of Belarus, Lukashenko’s government, is increasingly dependent in its foreign and security policy on Russia and it cannot actually pursue its own autonomous decisions,” said Artyom Shraibman, a Belarusian political analyst with the Carnegie Moscow Center.

As Western leaders warn that Russia could mount an attack on Ukraine in coming days, Tikhanovskaya, who is recognized by Western leaders as the rightful winner of the flawed 2020 presidential election, said Belarus was “losing its sovereignty” and called for Russian troops to leave immediately.

“The presence of Russian troops on our territory violates our constitution, international law, and endangers the security of every Belarusian and the whole region. Belarus is dragged into someone else’s war and turned into an aggressor country,” she said in a statement Sunday.

Lukashenko has been beholden to Russian President Vladimir Putin since Belarus’s disputed 2020 election, when street protests nearly toppled him from power before Putin promised to send in Russian forces to quell unrest if required. Lukashenko launched a massive crackdown, beating and jailing hundreds of opposition figures and activists, and clung on without Putin’s help.

Putin and Lukashenko met Friday to discuss the crisis between Russia and NATO, after Western countries rejected Moscow’s demands for sweeping security guarantees including barring Ukraine and other countries from joining NATO and rolling back alliance forces and materiel from Eastern Europe.

Lukashenko said after Friday’s meeting that he and Putin worked out a joint plan to deter “Western aggression.” The next day, Putin rewarded him with an invitation to attend drills of Russia’s nuclear forces as the Russian leader oversaw multiple launches of hypersonic and cruise missiles.

A Kremlin photo showed the two sitting at a circular white table in the situation center of Russia’s Defense Ministry as Putin launched the drills, co-opting the Belarusian leader as he sent a powerful message to Washington and NATO about his determination to reshape Europe’s security architecture, and his willingness to use military force if necessary.

Putin sees Belarus and Ukraine as Russia’s junior Slavic brothers, part of what he calls the “Russian world.” He is convinced that Ukraine can only succeed if, like Belarus, it joins Russia’s sphere of influence.

As Western officials warn Putin against an invasion to force Ukraine’s capitulation, Putin has dominated Belarus without the need for military force, by leveraging Lukashenko’s political debt. It is not yet clear whether Putin will demand that Belarusian forces participate directly, should he invade Ukraine, but Russia would use Belarusian airfields, transportation and logistics.

“When it comes to war, Putin will simply take it for granted that he has Belarus as an extension of his territory, militarily speaking, so it might be like Belarus is an accomplice, a supporting force, but not participating and attacking Kyiv together with Russian soldiers,” said Shraibman, the analyst.

Even before the exercises began 10 days ago, Western military analysts warned that it could be cover for an attack force to invade Ukraine from the north and potentially encircle the capital Kyiv, part of a large-scale, multipronged invasion from the south, east and north.

According to NATO, there are some 30,000 Russian forces in Belarus, as well as substantial military hardware including S-400 missile systems, positioned in the south of the country.

Shraibman said that if Lukashenko ordered his forces to participate in an invasion of Ukraine, Belarusian military officials would obey their orders, but probably reluctantly.

“From my analysis of the public opinion in Belarus, including in law enforcement and the military, there is simply zero appetite for Belarus being dragged into any kind of conflict and let alone the conflict of another country.”

Lukashenko has floated the idea of hosting Russian nuclear weapons on Belarusian soil several times, including this past week — an example of him offering the Kremlin even more than Putin expected, Shraibman said.

On Saturday, at Putin’s side during the nuclear forces exercises, Lukashenko was showing his loyalty at a critical time for Putin, hoping to win economic support and favors, he added.

“Lukashenko does even more than what is demanded from him, for example his initiative about the nukes being stationed in Belarus. He sometimes wants to overperform to show that he is even more of an ally than everybody could expect.

“Until we are in a war situation, while it is still mainly lip service, he can afford to do this. He’s happy to do it.”

Khrenin said the focus of the continued military drills would be the same as the recently completed exercise: “to ensure an adequate response and de-escalation of military preparations of ill-wishers near our common borders.”

Just four days ago, Belarusian Foreign Minister Vladimir Makei told The Washington Post: “Not a single [Russian] serviceman, not a single piece of military equipment will remain in Belarus after these exercises.”

The first hint that Russian forces might not leave after the exercises came Saturday, when Belarusian general Alexander Volfovich told journalists that all the tasks of the exercises had been achieved but that, “the exercise may continue. When and for how long will be decided by the head of the inspection.”