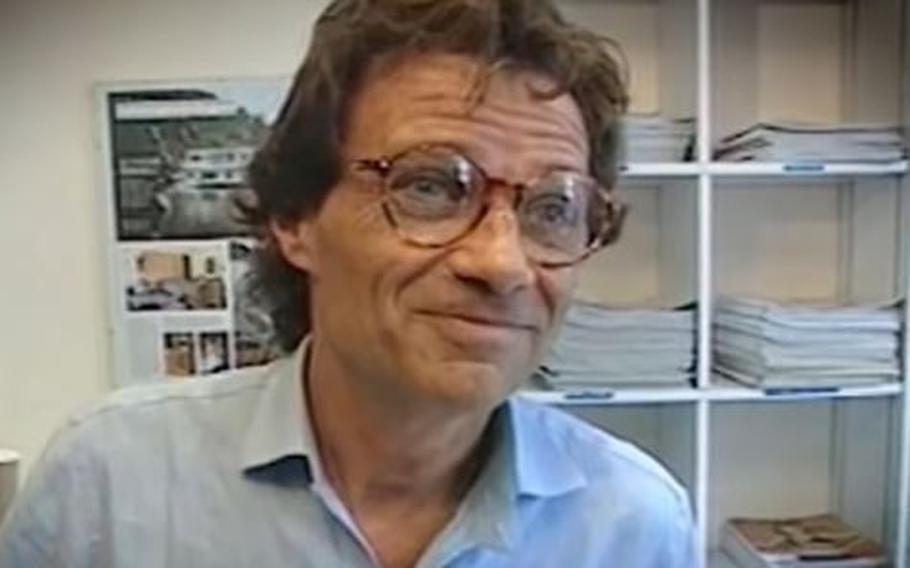 A video screen grab shows Modeling agent Jean-Luc Brunel, who was close to former financier and convicted sex felon Jeffrey Epstein. Brunel, who was taken into custody in France in December 2020, was found dead in his Paris prison cell on Saturday, Feb. 19, 2022. (YouTube)

Jean-Luc Brunel, the former head of a French model agency who was accused of rape in the 1990s and later of supplying young girls to disgraced financier Jeffrey Epstein, was found hanged in his Paris prison cell early Saturday, French prosecutors confirmed to local media.

The 76-year-old was found dead in his cell at around 1 a.m. Saturday during an overnight check by guards at La Santé prison in Paris, prosecutors told Le Monde. Brunel was being held as part of an ongoing investigation into the alleged rape of minors and trafficking of minors for sexual exploitation. Several models had accused him of sexual assault and rape, and French police had interviewed many potential witnesses in the case. Brunel had denied the allegations.

He was a close associate of Epstein's - and the two men's deaths were similar in nature. Epstein, 66, died by suicide in his prison cell in August 2019 while awaiting his own trial on federal sex trafficking charges.

Brunel's attorneys did not immediately respond to requests for comment. They told Le Monde that the apparent suicide of their client "was not driven by guilt, but by a deep sense of injustice."

"Jean-Luc Brunel [had] continued to proclaim his innocence," the attorneys said.

Among his alleged victims was former model Thysia Huisman, who accused Brunel of abuse when she was 18 in 1991. Huisman expressed her disappointment early Saturday.

"I am in shock. Was this really suicide?" she tweeted. "And it feels disappointing. This is a completely different ending without any real justice for his victims."

Brunel's death comes days after Britain's Prince Andrew settled the sexual abuse lawsuit brought by a woman who says she was trafficked to him by Epstein, a multimillionaire investor whose well-known associates also included Bill Clinton and Donald Trump, among others. The amount and details of the settlement between Andrew and Virginia Roberts Giuffre - who said she was recruited as a teenager by Epstein and his longtime paramour, Ghislaine Maxwell, in Palm Beach, Fla. - were not disclosed in a court filing this week.

Maxwell faces as much as 65 years in prison after being convicted in December of sex-trafficking charges for assisting Epstein in abusing young girls.

Brunel was a model talent scout for the Karin Models agency, which he went on to lead. When he was banned from the agency after a BBC report highlighting his alleged abuse, he moved to the United States. Through Maxwell, he was introduced to Epstein, who gave him funding to found Brunel's U.S. agency, MC2 Model Management, according to the Guardian. Brunel, who is credited with discovering supermodels such as Christy Turlington and Milla Jovovich, became a frequent companion of Epstein's whenever the financier traveled to France.

For years, several American models in Paris had accused Brunel of sexual misconduct - groping and other sexual advances, drugging women's drinks, rape - in the hope that he would be stopped. But justice was considered elusive for Brunel's alleged victims, much as it was for the women who accused Epstein of abuse only to see him serve just 13 months in jail more than a decade ago.

In December 2020, Brunel was arrested at Charles de Gaulle Airport in Paris shortly before boarding a plane for Dakar. French authorities said Brunel was a central figure in the probe into alleged sexual exploitation of women and girls by Epstein and his inner circle. Brunel was released on bail last November but was ordered to return to prison while awaiting trial.

Attorney Brad Edwards, who represents Giuffre, told The Washington Post that the apparent suicide spoke volumes about the case. Giuffre has said in court documents that Epstein pressured her to have sex with Brunel when she was a teenager. Edwards, who said he has represented more than 60 Epstein victims, likened Brunels's motivations in the alleged suicide to Epstein's.

"Rather than be held accountable, he just checked out," he said of Brunel. "They're both very selfish people, so if the world isn't going to be what they want it to be, then there's no sense in living."