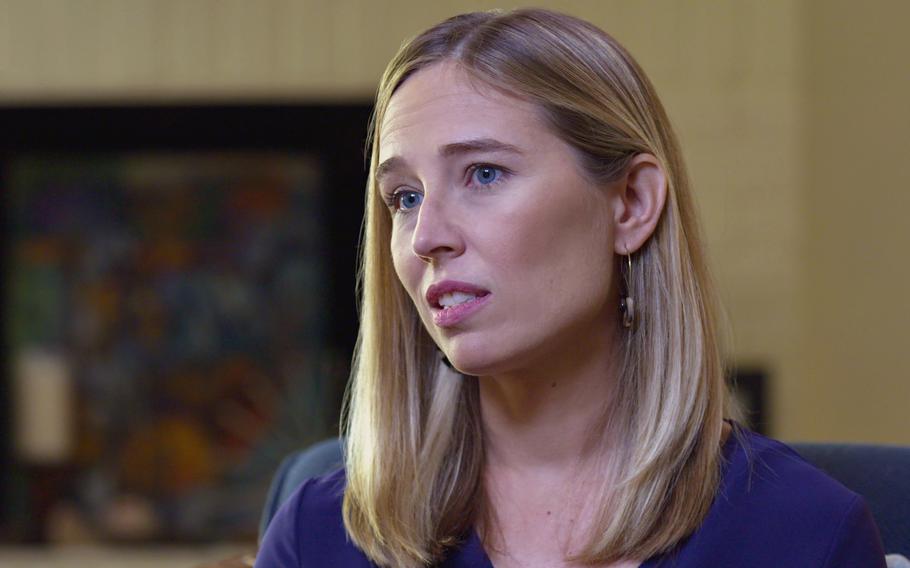 Annie Farmer – as seen in “Filthy Rich,” a Netflix 2020 docuseries on Jeffrey Epstein –said she first met Epstein as a teenager in the 1990s. She and her older sister, Marie, told the FBI that they were sexually assaulted by Epstein and his girlfriend/employee Ghislaine Maxwell, but no charges were ever filed. (Netflix)

NEW YORK (Tribune News Service) — The prosecution rested its case against Ghislaine Maxwell as a fourth and final accuser testified Friday that the British socialite touched her breasts during a naked massage when she was 16 years old.

Annie Farmer, now 42, said that Maxwell also directed her to give a foot massage to Jeffrey Epstein when she was invited by the multimillionaire financier to an educational retreat at his New Mexico ranch in 1996.

Farmer’s mother, Janice Swain, told the jury that Epstein called her in advance of the New Mexico trip to get her permission for Farmer to attend the retreat with 20 to 25 “academically gifted” high school students. Swain recalled that Epstein assured her that his “wife,” Ghislaine, would act as a chaperone.

But when Farmer arrived at the ranch, she learned that she was the only guest there.

She was especially anxious because, a few months earlier, Epstein had touched her inappropriately during a movie she and her sister attended with him in New York. Epstein had paid for Farmer to come to New York to visit her older sister, Maria Farmer, an artist who worked for Epstein at his New York mansion.

It was the 10th day of the trial in federal court in Manhattan, where attorneys and witnesses are using special plexiglass booths fitted with air filters to allow them to speak without wearing masks as one of the many precautions the court has set up against COVID-19.

Farmer, a psychologist by profession, was one of the final witnesses for the prosecution, which unexpectedly ended its case weeks ahead of schedule.

On Friday, prosecutors showed the jury Farmer’s journal in which she wrote about the New York incident after it happened, noting in the entry that she was “weirded out” by how Epstein caressed her hand and arm, and then suddenly took it away when her sister appeared to be looking.

Farmer wrote that she didn’t tell her older sister what occurred because Maria “worshipped” Epstein and she knew that Epstein was Maria’s boss and he was helping her art career.

“It’s not a big deal,” she wrote in her journal, expressing confusion over what Epstein had done.

“I was trying to come up with excuses in my mind to justify it,” she explained to the jury.

Epstein had suggested that he might subsidize a trip for her to travel abroad that summer and seemed to take an interest in her education. He was almost “fatherly,” Farmer said.

So when he flew her from her home in Arizona to New Mexico she believed she was among a selected group of students he was going to assist by paying for their college.

It was during that visit that Farmer met Maxwell, who was then in her 30s. Maxwell was witty and pretty, Farmer testified, and at first, she was comforted by Maxwell’s presence at the ranch, a remote 40,000-acre outpost located in Stanley, New Mexico.

Maxwell and Epstein took Farmer into town, where they went shopping and bought her a pair of black cowboy boots. The three of them then went to a movie, “Primal Fear,” about an altar boy accused of brutally murdering a Catholic archbishop who had sexually abused him as a boy.

While waiting in line for the movie, Farmer recalled that Maxwell playfully pretended as if she was trying to pull down Epstein’s pants, making Farmer feel even more unsettled.

She told the jury that during the film, Epstein began holding her hand and rubbing her arm in front of Maxwell. Later, back at the ranch, Maxwell told Farmer that she wanted to show her how to massage Epstein’s feet.

“I felt very uncomfortable. ... I wanted to stop. I was hoping it would be over quickly,” she recalled. 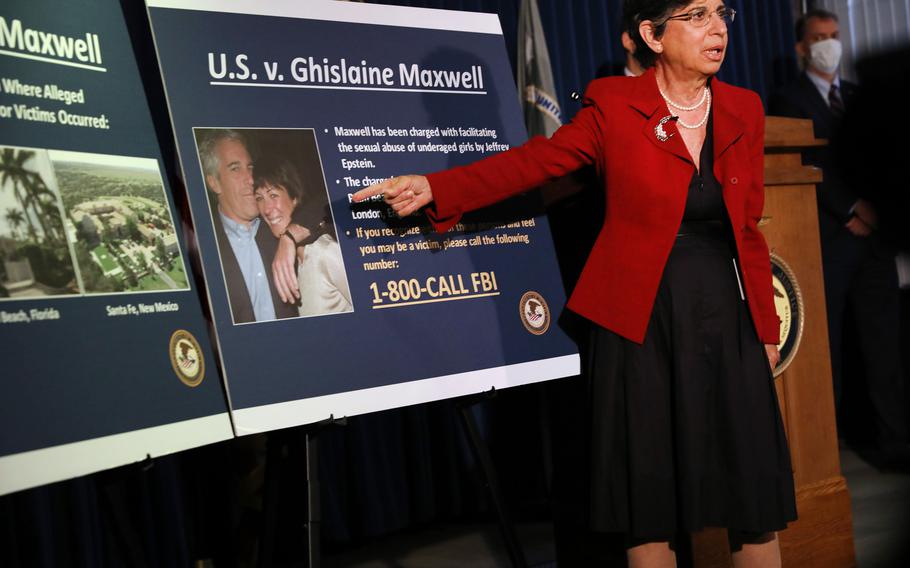 Shortly thereafter, Maxwell asked Farmer if she had ever had a massage, and when she said no, Maxwell offered to give her one. She directed the teenager to undress and get on a table under a bedsheet, Farmer said. Maxwell chatted casually as she began the massage, then suddenly she pulled down the sheet and began rubbing Farmer’s breasts.

Farmer told the jury that while Epstein wasn’t in the room, she felt that he was watching her.

The next morning, she said Epstein came into her bedroom and crawled in bed next to her, wrapping his arms around her and pressing up against her body. She was so upset and frightened that she made an excuse to go to the bathroom and waited there until he left.

She flew home and didn’t tell anyone about the episode until several months later, when she confided in her then-boyfriend, David Mulligan. Mulligan testified that Farmer told him about the incidents in New Mexico in the fall of 1996 after she returned from a summer trip to Thailand and Vietnam that Epstein had paid for.

Farmer also testified that in November 2006 she met with two FBI agents, Nesbitt Kuyrkendall and Timothy Slater, who were investigating a criminal case against Epstein in Florida, where a number of girls and young women reported they had been sexually assaulted by him during massages at his Palm Beach, Florida, mansion.

Among other things, she told the FBI that she still had the black cowboy boots that Epstein and Maxwell had bought for her. But she said they didn’t ask her to produce them because she said the case “didn’t go anywhere.”

After that, she began wearing the boots in almost an act of defiance for what they had done to her, she said. On cross-examination, defense attorney Laura Menninger scoffed at the idea that Farmer would dance the two-step in a pair of boots given to her by people she claimed had abused her.

“You went dancing in those boots?” Menninger asked, incredulous.

Menninger sought to downplay Maxwell’s role in the events, pointing out that Maxwell didn’t touch Farmer’s nipples during the massage, and that she never wrote about Maxwell in her journal. Menninger implied that Farmer had “reconstructed” her memory to fit with a narrative of abuse from 25 years earlier so that she could collect money from the Victims’ Compensation Fund set up by Epstein’s estate after his death.

Farmer said it was not about the money — because she already received $1.5 million from the fund. She was testifying because she wants Maxwell to be held accountable, she told the jury.

“They were confusing my boundaries, making me question myself about what was right and what was not right, with the ultimate goal of sexually abusing me,” she said.

In 2008, Epstein received federal immunity on sex trafficking charges in the Southern District of Florida. He served just 13 months in the Palm Beach county jail on prostitution charges involving a minor.

In 2018 — a decade later — his case was the focus of a Miami Herald investigation, “Perversion of Justice,” that detailed how federal prosecutors had worked together with Epstein’s high-profile lawyers to minimize the scope of his crimes. They cut a secret plea deal that was kept from his victims.

After the series, Epstein was rearrested in 2019 in the Southern District of New York on new sex trafficking charges. He was found dead in his jail cell in what authorities ruled was a suicide by hanging.

Maxwell, who was long suspected of helping to facilitate the abuse, and even participating in it, was arrested in 2020.

The defense is expected to begin presenting its case on Thursday.

Maxwell faces multiple counts of enticement of minors to engage in travel for illegal sex acts with minors, sex trafficking with a minor and three counts of conspiracy.