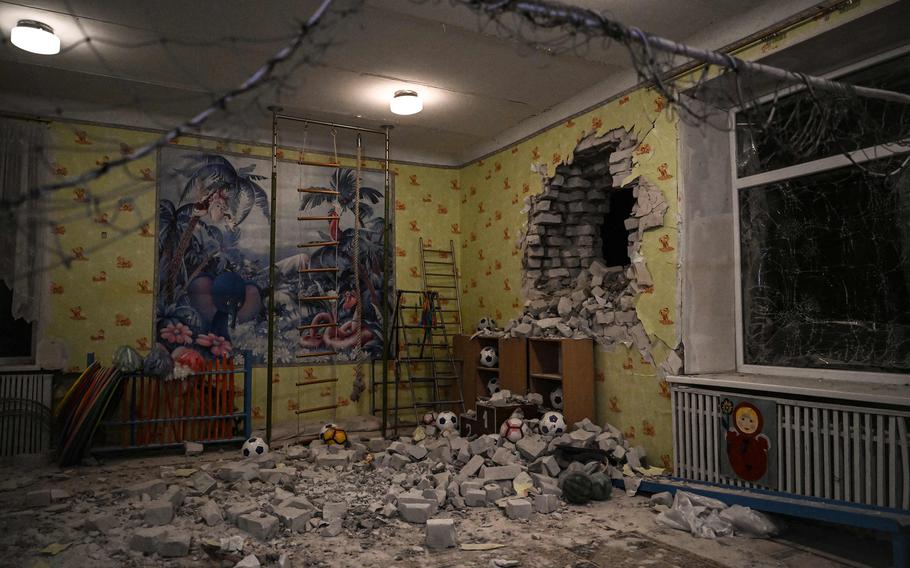 A photograph shows debris after the reported shelling of a kindergarden in the settlement of Stanytsia Luhanska, Ukraine, on Thursday, Feb. 17, 2022. U.S. Defense Secretary Lloyd Austin warned on Feb. 17, 2022, of a provocation by Moscow to justify military intervention in Ukraine after “disturbing” reports of mutual accusations of bombing between the Ukrainian military and pro-Russian separatists. (Aris Messinis, AFP/Getty Images/TNS)

(Tribune News Service) — To hear Russian media tell it, the government of Ukraine is run by neo-Nazis waging a genocidal campaign against ethnic Russians in the country's east, where Moscow-backed authorities regularly uncover mass graves full of the corpses of women and children with bound hands and bludgeoned heads even as they face the hell of constant shelling.

Such false images and narratives have become a daily staple in Russia in the months since an estimated 150,000 Russian troops, armored vehicles, warplanes and naval ships began assembling around Ukraine's periphery. The Russian media have gone into overdrive with stories depicting a government in Kyiv so cruel that Moscow has no choice but to swoop in and protect the ethnic Russians of Ukraine's eastern Donbas region.

"It's a war between the Ukrainian government and its own people. … People are dying there every day. Thousands of civilians died there. Thousands of children lost their limbs there, buried in little coffins," Margarita Simonyan, head of the state-funded broadcaster RT, said on a talk show on the Russia-1 channel.

"Go there once. … You'll change your attitude completely. And you'll understand that Russia can't help but stopping this war. Do we have to wait until they organize concentration camps out there? Until they start poisoning their people with gas?"

Russian officials have reinforced such views, including President Vladimir Putin, who at a news conference with German Chancellor Olaf Scholz this week said that, "in our view, what is now happening in Donbas is genocide," even as he insisted that he would pursue diplomacy to resolve the situation in Donetsk and Luhansk, the two enclaves that make up Donbas. Fighting between Ukrainian forces and Russian-backed separatists has raged in the region since 2014 and killed more than 14,000 people. A tenuous cease-fire has been in place for some seven years, but both sides regularly accuse each other of violations.

Further amplifying the Russian rhetoric is a veritable army of Moscow-aligned digital activists and social media accounts. Their fabricated stories have added to the skyrocketing volume of online posts on the crisis in Ukraine, which has almost tripled in recent weeks, said Joe Ondrak, head of investigations at Logically, a London-based data analytics firm that tracks disinformation.

Over the last year and a half, Logically has tracked certain narratives that get wheeled out at different times to achieve a desired effect. One "tried and tested cudgel" by Russia-aligned disinformation groups, Ondrak said, is the portrayal of Ukraine as a country full of neo-Nazis — a trope employed last month and again this week.

On Twitter and the instant-messaging app Telegram, accounts in the last two or three days took gruesome images of Syria's brutal civil war and misrepresented them as photos from Donbas and other areas of Ukraine.

"It's this idea that this is all against the Russians' will, casting them as being put upon and setting a pretext for them to defend the Russian-backed separatists," Ondrak said.

U.S. officials have shot back. On Wednesday, the U.S. mission to the Organization for Security and Cooperation in Europe, which monitors the situation in eastern Ukraine, rebuked Russia's claims of genocide in Donbas as a "reprehensible falsehood."

OSCE's special monitoring mission "has complete access to the government controlled areas of Ukraine and HAS NEVER reported anything remotely resembling Russia's claims," said a tweet on the social media account of the U.S. mission.

Also on Wednesday, a senior Biden administration official, who spoke on condition of anonymity, accused Moscow of trotting out a bevy of false claims with the intention of using them as a casus belli for an incursion into Ukraine. Those claims included reports of unmarked graves of civilians killed by Ukrainian armed forces in the east, statements that the U.S. and Ukraine are developing biological or chemical weapons, and warnings that the West is bringing in guerrillas to kill locals.

"Each of these allegations is categorically false, and we should expect more false reports from Russian state media over the coming days," the official said, adding that Moscow had used this playbook to justify previous incursions into Ukraine.

Thursday began with fears that an anticipated false-flag attack had materialized when Russian state media outlet RIA said that Ukrainian forces had violated a cease-fire in Donbas and shelled a nursery in Stanytsia Luhanska, a settlement near the front line. Pro-Russian journalists and activists claimed it was part of a large-scale bombardment by Ukrainian forces of areas controlled by the separatists.

But observers noted soon afterward that the nursery was on the Ukrainian-controlled side of the front line. The Ukrainian Defense Ministry said the attack was one of 29 cease-fire violations by the separatists, with the nursery and its environs struck by 32 artillery shells.

"The shelling of a kindergarten in Stanytsia Luhanska by pro-Russian forces is a big provocation," Ukrainian President Volodymyr Zelensky said on Twitter. "We need an effective mechanism for recording all cease-fire violations."

Asked about the shelling at a news conference in NATO headquarters in Brussels, U.S. Defense Secretary Lloyd J. Austin III said: "We've said for some time that the Russians might do something like this in order to justify a military conflict. So we'll be watching this very closely."

Pictures posted on social media depicted a hole blown through a brick wall, with chunks of masonry scattered on a floor along with a number of soccer balls in what appeared to be a playroom. Reports said three adults were injured.

Russia blamed the attack on Ukraine.

"We have repeatedly warned that Ukraine's excessive military buildup in close proximity to the line of contact, along with possible provocations, could pose a great danger," Kremlin spokesman Dmitri Peskov told reporters, adding that "the situation near the borders of Russia can ignite at any moment."

He described the incident as an exchange of strikes on the line of contact, but said that "the first strikes came from Ukraine."

"This is very alarming information," he said.

Though a large amount of Moscow's messaging is aimed at audiences at home, some of the propaganda has been designed to appeal to and be amplified by various left-wing and social groups in the West, Ondrak said.

"One of the things we've noticed in the past month is a trial run to see where they can foster a sympathetic ear in Western audiences, and hitting hard on NATO expansions, framing it as American imperialism by another name," he said.

Another target of Russian disinformation is Ukraine itself. Earlier this month, the Security Service of Ukraine announced that it had uncovered and shut down a pair of so-called bot farms with a capacity of 18,000 accounts that were spreading panic on social media and sending out bomb threats. The security services said in a statement that preliminary investigations indicated they had been set up by Russian parties.

Perhaps the most damaging piece of disinformation in recent days, said Lada Roslycky of the Ukraine-focused security consultancy Black Trident, was the rumor, supposedly based on intelligence, that Russia would launch an assault on Ukraine on Wednesday. Zelensky, Ukraine's president, even repeated the rumor publicly, as did media reports whose combined effect was to wreak havoc on the Ukrainian economy as well as on residents' state of mind, Roslycky said.

"People in Kyiv were really upset waiting for things to happen on the 16th, and now we're waiting for the next date," she said. "These leaks lead to nothing except psychological harm."

The false information and fearful reaction gave Moscow another reason to crow — and to paint all Western talk of invasion as ridiculous. On Thursday, President Biden continued to insist that a Russian attack could come at any time, and another rumor apparently surfaced that an assault was planned for sometime after Sunday.

"It looks like another fake has been coined," Peskov, the Kremlin spokesman, said, according to Russian news agency Tass.

"There have been many dates, and far more specific ones," Peskov added. "Honestly, I don't know about their audience, but our audience, at least, simply laughs at it."