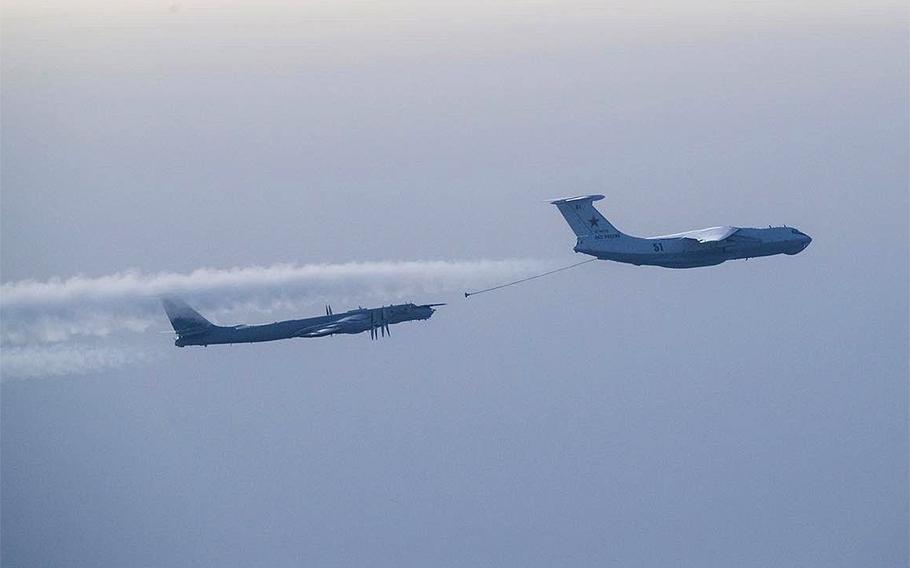 A Russian Tu-95 Bear, left, and a Il-78 Midas tanker fly over the Barents Sea on Feb. 3, 2022, according to NATO. A quick reaction alert was launched to intercept and identify the Russian aircraft after they flew close to NATO air space without filing flight plans, NATO Air Command said. A Norwegian P-3 Orion identified the aircraft. (Norwegian air force)

The intercepts on Thursday came as tensions soar between NATO and Russia over Moscow’s military buildup around Ukraine. But while past intercepts between allied and Russian aircraft have sparked accusations of dangerous midair maneuvering, this week’s encounters were deemed safe by allies.

“During the intercept, it was confirmed that these fighters were escorting a Russian TU-154 transport aircraft,” NATO said.

The scrambles by U.S. aircraft were ordered by NATO’s Combined Air Operations Center Uedem, based in Germany, which is responsible for keeping watch over the Baltics.

Meanwhile, Norwegian and British aircraft on the same day intercepted Russian aircraft flying from the Barents Sea into the North Sea, NATO said.

At no time did the Russian aircraft enter allied airspace, according to NATO.

U.S. and NATO jets routinely scramble to identify Russian and other unidentified military and civil aircraft flying near their airspace without previously filed flight plans. NATO officials say Russian warplanes frequently fly with their transponders turned off and do not respond to air traffic control.