Ukraine accuses US of hurting economy by sowing panic over war 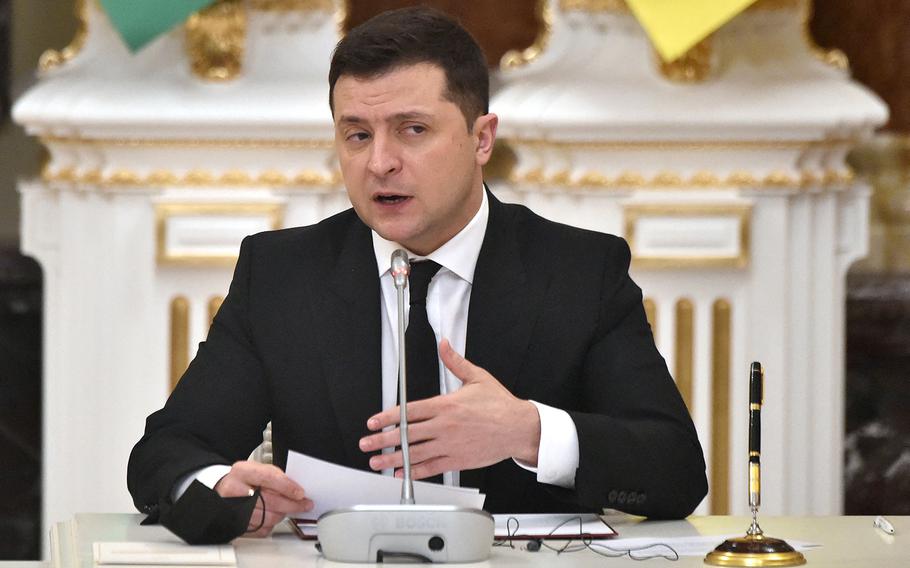 (Tribune News Service) — Ukrainian President Volodymyr Zelenskyy criticized the U.S., saying it was damaging his country’s economy by unduly stoking panic that Russia may be planning an invasion.

Russia has massed over 100,000 troops, along with tanks and heavy weaponry, along the border, while denying any plans for an invasion. Zelenskyy said Friday that satellite images alone were insufficient to assess the extent of the military buildup and the situation hasn’t escalated.

“We are grateful to the U.S. for the support for our independence and territorial integrity,” Zelenskyy told foreign media on Friday in the capital Kyiv. “But I am the president of Ukraine, I am here and I know more details and I have deeper knowledge than any other president.”

His remarks come amid increasingly strong U.S. warnings about Russia’s plans and continuing resistance to such predictions by Zelenskyy and other Ukrainian officials determined to calm their nation and markets.

The issue arose again on Thursday night, when U.S. President Joe Biden held a call with Zelenskyy. Biden told Zelenskyy “that there is a distinct possibility that the Russians could invade Ukraine in February,” according to U.S. National Security Council spokesperson Emily Horne.

“I am not saying escalation could not happen,” Zelenskyy said Friday. “We have been saying this for eight years already and part of our territories are already occupied.”

Zelenskyy has criticized Biden before, after the U.S. president said earlier this month he expects Russia to “move in” on its neighbor and that the U.S. and its allies had yet to agree on how to hold Moscow accountable over “a minor incursion.”

In another sign of tensions, Ukrainian officials also have objected to the U.S. advising families of embassy employees in Ukraine to leave the country. On Friday, Zelenskyy called that “a mistake, wrong overreacting steps that do not help us. It is not the Titanic here.”

The White House readout of the Biden-Zelenskyy call said the American president “made clear that despite the departure of American family members of embassy personnel, the U.S. Embassy in Kyiv remains open and fully operational.”

Economic aid to Ukraine is also becoming an increasingly urgent issue. Ukraine needs as much as $5 billion to stabilize the economy, Zelenskyy said. The hyrvnia has dropped 8.4% against the dollar, one of the worst performers worldwide, since November when Russia again massed troops on the border.

The White House said that on their call Biden told Zelenskyy the U.S. is “exploring additional macroeconomic support to help Ukraine’s economy.”