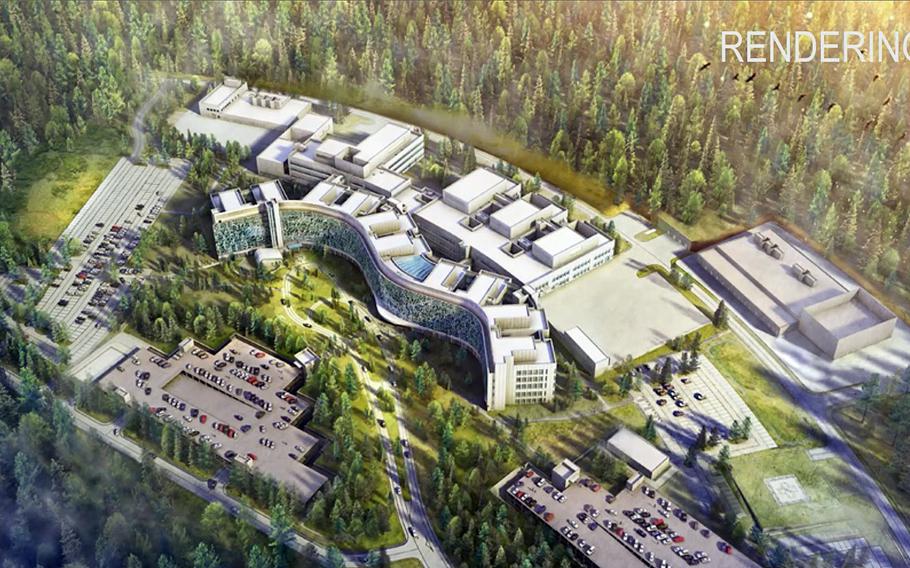 An artist’s rendition of the Rhine Ordnance Barracks Medical Center in Weilerbach, Germany, being built to replace the present medical center in Landstuhl. A contract worth $969 million to complete the largest U.S. military hospital overseas has been signed, the Defense Health Agency announced Jan. 19, 2022. But the estimated completion date for the facility that is to replace Landstuhl Regional Medical Center has slipped to 2027. (U.S. Army Corps of Engineers)

WEILERBACH, Germany — The construction timeline for a nearly billion-dollar Defense Department hospital next to Ramstein Air Base in Germany has been pushed back again, putting the current estimate five years later than the original.

News of the delay accompanied an announcement Wednesday that the $969 million contract for most of the work on the facility had been signed.

The contract includes construction on a replacement for Landstuhl Regional Medical Center, the U.S. military’s largest overseas hospital. The Cold War-era facility played a prominent role in treating service members who were wounded during the wars in Iraq and Afghanistan, as well as other conflicts.

The Landstuhl hospital replacement will be known as the Rhine Ordnance Barracks Medical Center. It will serve more than 200,000 Americans in Europe and continue the mission of supporting deploying forces in Africa and the Middle East.

The 86th Medical Group clinic at Ramstein also will move to the new complex, which is about 7 miles from the Landstuhl facility.

When work began in 2014, military construction planners said the new hospital was expected to be completed by 2022. The timeline has since been repeatedly revised and now is pegged for late 2027. 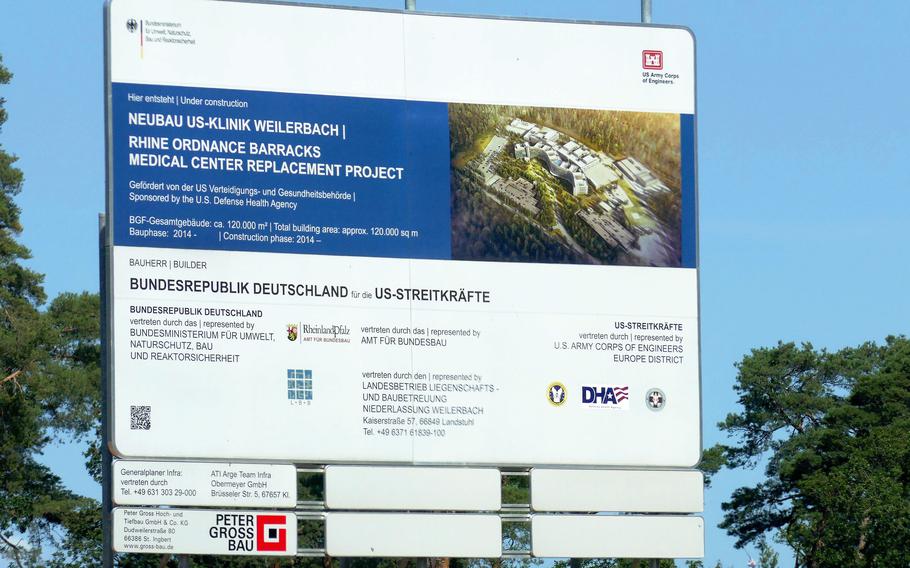 A construction information sign on the site where the Rhine Ordnance Barracks Medical Center is being built. A contract worth $969 million to complete the largest U.S. military hospital overseas has been signed, the Defense Health Agency announced Jan. 19, 2022. But the estimated completion date for the facility that is to replace Landstuhl Regional Medical Center has slipped to 2027. (Michael Abrams/Stars and Stripes)

In 2018, Army Corps of Engineers officials said the medical center was on track to be completed by December 2023 and operational in summer of 2024.

“We recognize that this project has taken longer than expected, but we are extremely excited to take the next step forward in providing our servicemembers and their families the modern, world-class medical facility that they deserve — one that will serve this community for decades to come,” said Catherine Bingham, a project official with the U.S. Army Corps of Engineers, Europe District, in a statement.

Numerous technical issues had to be resolved before the construction contract was awarded, Bingham said, due to the complexity of adhering to both German and U.S. design and building codes. Those include incorporating substantial changes in anti-terrorism and German energy and sustainability regulations, she said.

“Work here has continued since day one,” she said.

The contract calls for a 985,000-square-foot hospital with nine operating rooms, 120 exam rooms, and up to 93 beds, the Defense Health Agency said in a statement Wednesday. The new hospital is expected to employ about 2,500 people.

In 2020, Congress cut more than $100 million from the Pentagon’s $200 million request for the project, money that represented the final funding increment for the hospital. It’s unclear whether that money has since been funneled back into the project.

The German Construction Administration, in partnership with the Army Corps of Engineers and DHA, awarded the contract to a joint venture called Zueblin Gilbane, according to the health agency.

Zueblin is based in Stuttgart and has worked on facilities for the American military in Germany. U.S.-based Gilbane built the Fort Belvoir Community Hospital in Virginia.

The contract covers the most significant phase of the hospital campus construction. About $200 million has already gone into recently completed infrastructure.

The German government is contributing about $180 million for design and construction management, DHA said.