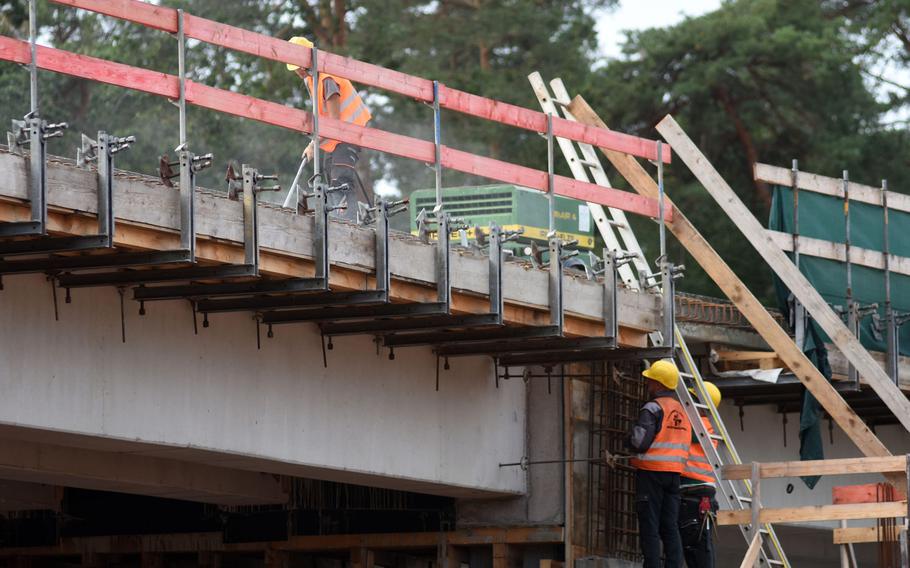 A construction crew worked last year on a new bridge that eventually will connect the new Rhine Ordnance Barracks Medical Center with Ramstein Air Base. Lawmakers are cutting appropriations for the new facility, slashing more than $100 million from a requested $200 million in 2021. (Jennifer H. Svan/Stars and Stripes)

STUTTGART, Germany — Congress has slashed funding for a new U.S. military hospital in Germany, raising the prospect of more delays on a project that is already years behind schedule.

The 2021 National Defense Authorization Act cuts more than $100 million from the Pentagon’s $200 million request, which was to be used for construction on a facility slated to replace the aging Landstuhl Regional Medical Center.

Last week, House lawmakers passed the defense bill, which allocated just $82.4 million for the new hospital at Rhine Ordnance Barracks, across from the Ramstein Air Base east gate. The Senate approved the same measure Friday, though President Donald Trump has threatened a veto despite the bill passing by more than a two-thirds majority.

The Army Corps of Engineers and medical officials in Europe declined to comment on what the budget cuts mean for the project, which began nearly seven years ago and was intended to be done by 2021. 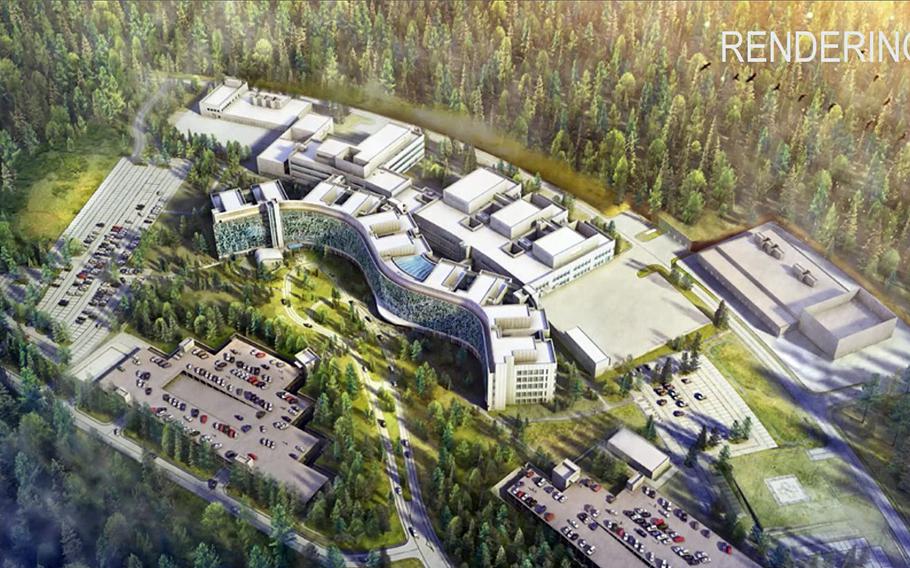 An artist's rendition of the Rhine Ordnance Barracks Medical Center in Weilerbach, Germany, being built to replace the present medical center in Landstuhl. Lawmakers are cutting appropriations for the new facility, slashing more than $100 million from a requested $200 million in 2021. (U.S. Army Corps of Engineers)

In July, the Army Corps said the target completion date is December 2025. But that was before the impending budget cut, which suggests more delays are possible.

The Senate Armed Services Committee’s budget had originally called for eliminating all funds for the new medical center. During negotiations with House lawmakers, $82.4 million of the $200 million request was eventually restored.

The NDAA called for an “incremental authorization of appropriations” in an amount equal to the military’s ability to use the funds within the year they are appropriated.

Up until now, most of the work at the Rhine Ordnance Barracks site has been focused on infrastructure like utilities and supporting road work. The $200 million was to go toward actual construction, Army officials said earlier this year.

It wasn’t clear why Congress reduced the medical center’s budget by such a large amount. The NDAA offered no rationale for the cuts.

However, lawmakers had voiced skepticism in past years about the scope of the project during its early planning phase, which was happening as the U.S. was drawing down forces in Iraq and Afghanistan, and downsizing in Europe.

In 2014, Landstuhl was reduced from a comprehensive Level I trauma clinic to Level III, in connection with a large decline in the number of injured troops being evacuated from war zones for treatment. The medical clinic is still the largest U.S. hospital overseas and supports forces in Europe, Africa and the Middle East.