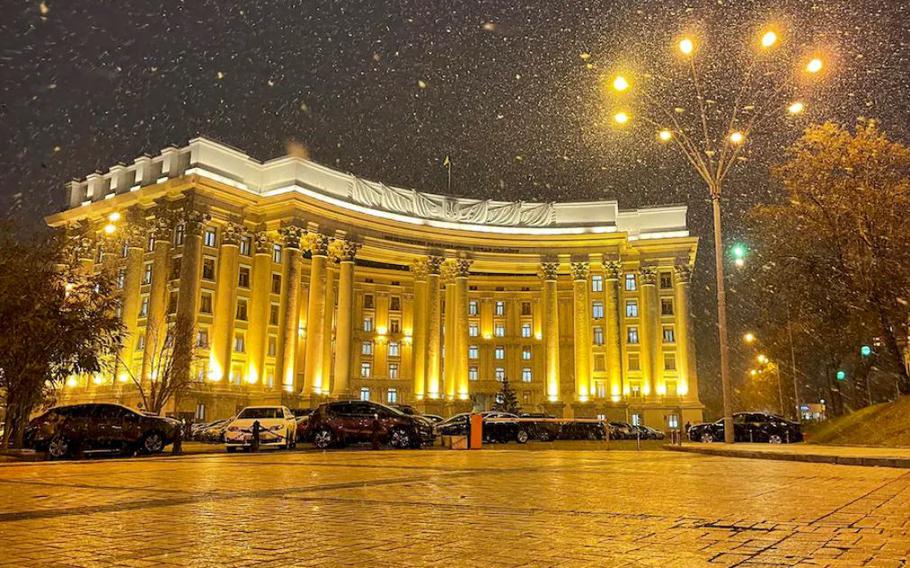 The attack comes as tensions soar between Russia and NATO, the Western military alliance, because Russian troops are massing on the Ukrainian border, prompting fears of an invasion.

A spokesperson for Ukraine’s cyber police said that “more than five” government sites were attacked and authorities have launched an investigation to identify the perpetrators. Officials said it was too early to say who was behind the attacks.

In a later briefing, Viktor Zhora, deputy head of Ukraine’s state agency of special communication and information protection, said that “close to 70” federal and local government websites were attacked, and a “substantial portion” are up and working again.

Russia has been behind similar incidents before, however, raising fears that it could mark the opening salvo in broader Russian aggression against Ukraine.

Just hours before the attacks, Dmitri Alperovitch, an expert on cybersecurity and co-founder of CrowdStrike, a leading firm in the field, told a Washington Post Live discussion that Ukraine had already been subjected to increased cyberattacks, which he said could be a prelude to an invasion.

“We are also seeing increased cyber intrusions that appear to be intelligence collection for potential execution of a kinetic operation by the Russians,” he said. “A lot of people, myself included, expect very likely an invasion of Ukraine to occur in the next month or so.”

Earlier this month, Ukraine’s state security services said that they had blocked in December close to 60 cyber attacks “against information systems of state institutions.” These included malware and “web app attacks.”

On Friday morning, Ukraine’s Foreign Ministry and Ministry of Education and Science posted on social media that their sites were down, and local media reported that the country’s main government website, the Emergency Situations Ministry and the Ministry of Veterans Affairs were also affected.

Visitors to some Ukrainian government sites were greeted with a message — written in Ukrainian, Russian and Polish — telling them that their personal data had been “uploaded to the public network” and “destroyed.”

“All information about you has become public, be afraid and expect the worst,” the message said. “This is for your past, present and future.”

Officials have maintained that the hackers did not obtained people’s personal information. “Ukrainians’ data is safe,” Mykhailo Fedorov, minister for digital transformation, posted in social media.

The attack came immediately after a flurry of diplomatic efforts in Europe failed to resolve the mounting crisis over Russian demands for sweeping new security arrangements by the United States and NATO. Among other demands, Russia wants them to block Ukraine and other Eastern European and former Soviet countries from ever joining the alliance.

Russia has positioned up to 100,000 troops and military equipment near Ukraine, and U.S. intelligence has warned that an invasion is being planned.

Russian officials have denied any plans to move against Ukraine and insist that the country has the right to deploy its forces anywhere on its territory. Moscow has also threatened to abandon any further security talks amid Washington and NATO’s refusal to budge in the face of its demands.

Russian Foreign Minister Sergei Lavrov added on Friday that he expects U.S. and NATO forces to use the tensions as a pretext to build up their forces in the region. He also said that Russia was ready for any new sanctions, which Western countries have threatened to impose if Russia invades Ukraine.

“They are capable of anything, but rest assured we are ready for any turn of events. Any illusions we might have left in the economy have vanished over the past seven years,” he said at a news conference Friday. “Every mechanism of economic ties that depend on entities controlled by the West clearly contain risks, but we are getting rid of them in a swift and consistent manner, first and foremost in high-tech sectors.”

Ukraine was the main target of the devastating NotPetya cyberattack in June 2017 that hit the country’s banks, ministries, subway and other organizations. The United States, Britain and others blamed the attack on the Russian military, although Moscow denied any role.

The virus spread across the world, impacting major global companies, including Merck, a pharmaceutical firm; shipping companies Maersk and FedEx; and others, bringing some transport operations to a halt.

In 2015 and 2016, blackouts hit portions of Ukraine’s electrical power grid. Investigators later determined that hackers caused the power cuts. In 2015, some 225,000 people were affected.