On Ukraine’s front, a real war overshadows worries about a possible future one with Russia 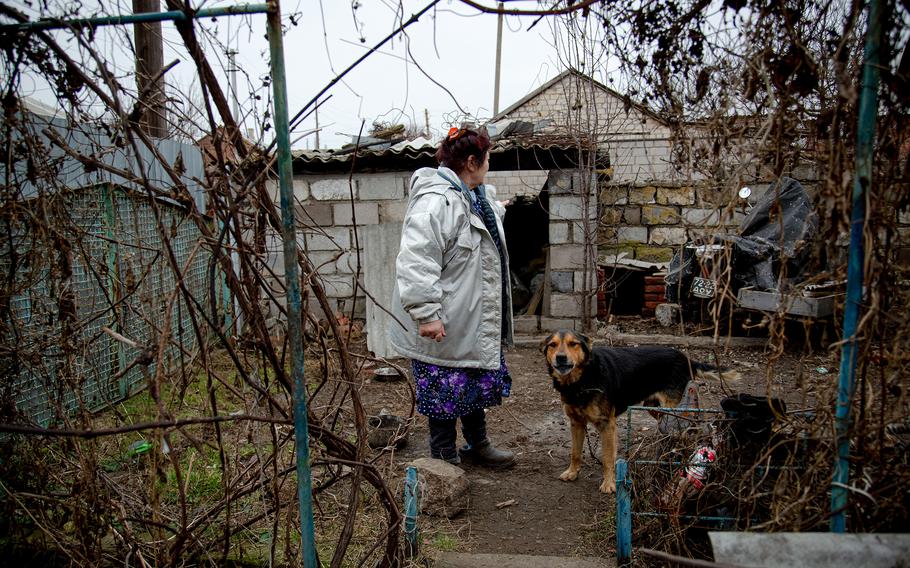 Svetlana Haytulova with her dog in Hranitne, Ukraine, stands in front of her house, which was damaged after shelling in October. (Serhiy Morgunov/The Washington Post)

HRANITNE, Ukraine — On one side of the Kalmius River in Ukraine's war-battered eastern Donbas region, a dirt road is lined with houses hit by artillery shells. On the other side are hills less than a mile away. That's where the Russian-backed forces are posted.

Distant booms can occasionally be heard from the road — what one Ukrainian soldier described as the "enemy saying hello."

This has been the daily, draining status quo in Ukraine's nearly eight-year conflict with pro-Moscow militants who control two separatist enclaves along the border with Russia. Though the two sides reached a cease-fire in 2015, hostilities continue. Nearly 14,000 have died.

Now Ukrainian officials and their Western allies fear that tensions with Russia are entering a new phase, with the Kremlin potentially prepared to launch an invasion. There are approximately 100,000 Russian troops and an array of military hardware massed in annexed Crimea and near Ukraine's border, according to U.S. and Ukrainian officials.

Moscow has also said it isn't readying an attack on Ukraine, but has demanded written "security guarantees" from the West. On Russia's list: A NATO pledge that the military alliance will not expand eastward and will also end all NATO activity, including training exercises, in Ukraine. NATO has said that's a non-starter — what some analysts fear Russia could use as justification for starting a war at Europe's eastern edge. 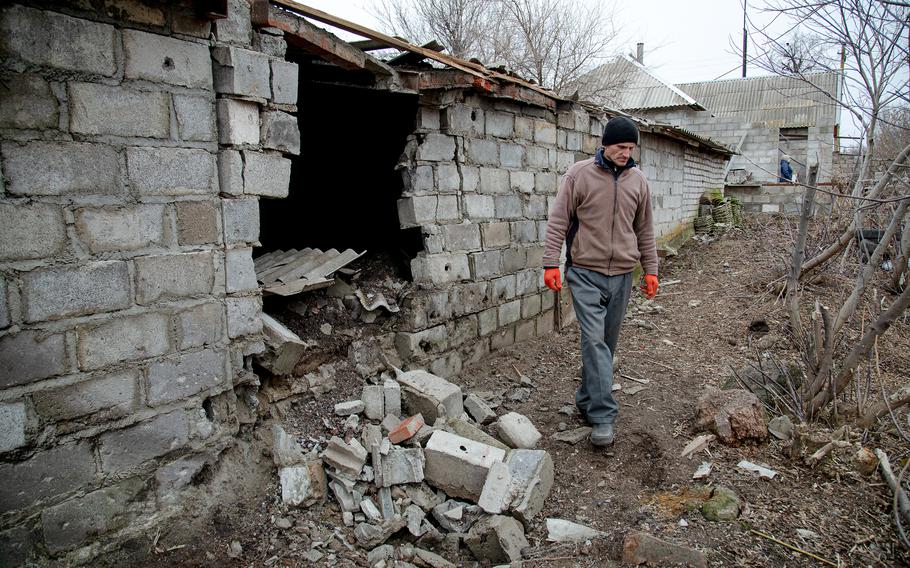 In Hranitne, a village on the Kalmius River that borders the territory controlled by separatists, war is already here — against forces Ukrainians say are Russian proxies. For years, the area was a relatively peaceful point along the conflict's front line. But then October shelling damaged several civilian homes and prompted Ukrainian forces to order a drone strike.

Svetlana Haytulova, 70, cried as she described how her bedroom wall was blown apart with her inside the house. A white tarp covers the hole now, doing little to keep the cold out.

"How will my son and his wife live here for another 45 years?" Haytulova said. "There's no end to this."

Driving through the Ukraine's Donbas region means periodic stops at checkpoints, where armed guards from Ukraine's Western-aided military ask where you're going and why. The scenery outside of the window is of downed power line towers, remnants from when the fighting was at its worst in 2014 and 2015.

Also visible: an empty stretch of trenches, a sort of backup if Ukraine's first line of defense breaks down.

"The whole world now knows that there is a war in Ukraine," said Oleksiy Danilov, secretary of Ukraine's national security and defense council.

"Before this, everyone thought that everything is fine here, but, in fact, the hot phase of war with Russia never stopped," he added. "It's basically been going on since February 2014."

Since 2016, Hranitne had largely escaped the periodic shelling seen elsewhere along the front line. Then in October, Volodymyr Vesyolkin, the military civil administration head in Hranitne, crossed the Kalmius River.

There, a small settlement called Staromarivka is in what Ukrainians refer to as the "gray zone" — a kind of no man's land that isn't controlled by Kyiv's forces or the separatists. For a month, the checkpoint for people in Staromarivka to visit the separatist-controlled territory was closed, and the only way for them into Hranitne was by foot over a narrow bridge. It's a 20-minute walk for groceries.

Vesyolkin said the people who live there asked for his help delivering the 120 tons of coal to get through the winter. He decided to visit the area with eight others: four civilians who also work for the military civil administration and four Ukrainian soldiers.

"It was actually really joyful," said Vesyolkin, who fled Horlivka, a coal-mining city about 85 miles northeast of Hranitne, when it came under the control of the pro-Russian insurgents in 2014.

"For me, as a person whose home is occupied and where I have not been for eight years, I entered this territory again as a representative of Ukraine, in an area that had not seen a civil servant in more than seven years," he said. "And the people there did not hide their joy either."

But the separatists saw the visit as an attempt to reclaim that territory. Moscow often says that Kyiv could try to take back the separatist Donbas regions "by force" — and that Russia could be forced to interfere to protect the Russian-speaking people who live there. Russian President Vladimir Putin recently equated the conflict with "genocide" against those living in the separatist enclaves.

Vasylyna Nikolayeva was home when she heard the dreaded familiar sound of shells ripping through the air. She grabbed her 6-year-old daughter, Eva, and put her in the bathtub, covering her with her own body. Nikolayeva knew to count the seconds between strikes — an opportunity to run.

Elsewhere in town, Nikolayeva's nephews were on their way to the store when the first shells started dropping. Their father told them to get down, but they were just frozen. At the home of Nikolayeva's parents, a shell fell in the yard.

Haytulova and her neighbors who live closest to the footbridge were hit the hardest. When an artillery strike obliterated her bedroom wall, parts of the ceiling started falling, too.

"I covered my ears, I didn't know where to go," she said. "I jumped into the street, and there is also bombing. I did not know what to do, I was standing there all frightened." 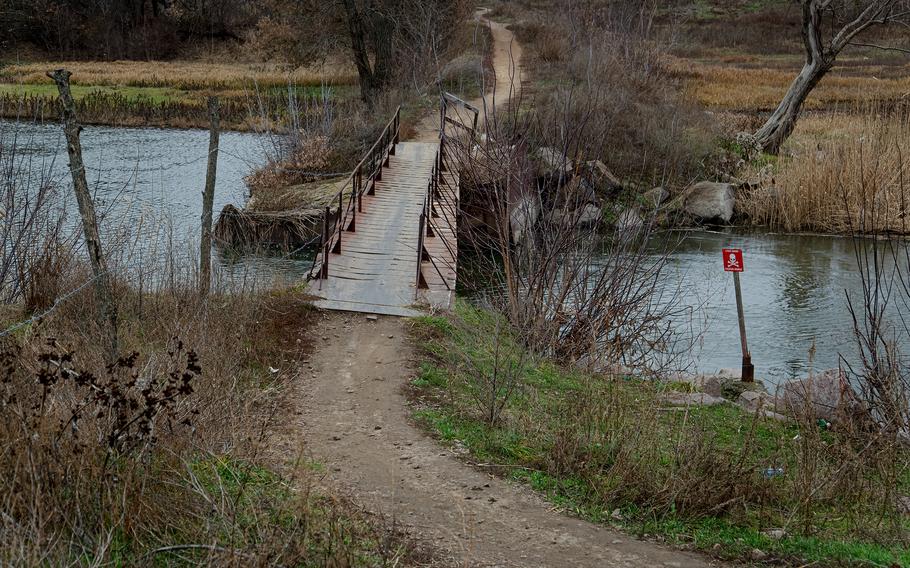 The pedestrian bridge over the Kalmius River and the road toward Staromarivka, in the “gray zone” area between front lines. (Serhiy Morgunov/The Washington Post) 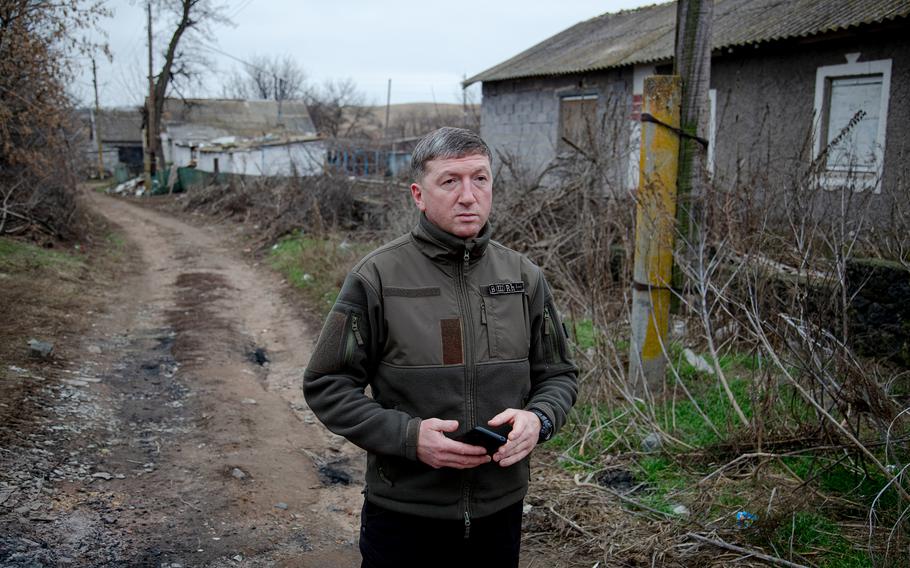 Volodymyr Vesyolkin, the military civil administration head, stands on a Hranitne street, which was damaged after shelling in October. (Serhiy Morgunov/The Washington Post)

On Oct. 26, a day after Vesyolkin had crossed the bridge, Ukrainian forces ordered a drone strike on the separatists' D-30 howitzer — an act Putin later referred to as an escalation on the part of Kyiv. It marked the first time Ukraine had delivered a drone hit in the conflict.

A day later, the fighting subsided. Eva, Nikolayeva's daughter, now instructs her classmates on how to act in case of more strikes. Meanwhile, Nikolayeva decided to move elsewhere in town, farther away from the front line.

Piles of cinder blocks dot Haytulova's street now. The yards are covered in craters from where shells landed. Some residents have started rebuilding. Others don't see the point when another onslaught can come at any minute.

"It was so quiet and then, bam, it started again," said 63-year-old Liudmilya Kulik. "What is all this fighting for? What did we even do?"

If Haytulova could afford to leave this place, she would, she said. A Ukrainian soldier visiting her property told her not to cry, that she would move her to one of the many abandoned houses in the area. It would at least have some heating.

During a walk along the river to see the footbridge, Ukrainian soldiers suggested to move quickly.

"We're exposed and the enemy is on the other side," one said.

Fifty miles north of Hranitne, whole apartment buildings are deserted. The military units posted in Krasnohorivka refer to the area as a ghost town. They recommend cars not even idle for too long by the abandoned structures. They are in firing range.

Ask the soldiers stationed here about the Russian forces accumulating along Ukraine's eastern border, and they respond with a shrug. It makes them uneasy. But their day-to-day routines haven't changed.

When the sun is up, it's quiet. They can sit around in huts, constructed amid the trench lines, drinking coffee.

Night is more dangerous. That's when the Ukrainians say that the Russian-backed forces will litter the area with mines, so that the Ukrainian side can't see where they land. That makes mornings treacherous, too.

In some outposts, the distance between the two sides can be just 250 feet. The Ukrainian soldiers say they can even hear when the separatists play music. Sometimes they're yelling something across. It's an enemy much more present than the threat of Russia's army, which many remain skeptical would actually invade.

"My opinion is that they won't attack," said Dmitry, a captain in Ukraine's military who declined to give his surname to avoid possible reprisals from separatists. "They would suffer large losses, firstly on the economic front because there would be sanctions. And also, no matter what happens, they'll have casualties, too."

"If it's a full-scale offensive, the number of deaths will be much higher," he added. "And it all won't go the way they want."

Ukrainians say their army is much improved from 2014, when Russia's invasion of Crimea blindsided Ukraine before the conflict in the east started. Much of Ukraine's greater strength comes from U.S. military assistance, including Javelin antitank missiles that were moved to the front line earlier this year in response to the growing threat from Moscow. The weapons have not yet been used.

But Russia clearly has the advantage in firepower, particularly its missile arsenal.

"There is no doubt that the Russian army is larger than the Ukrainian army," said Danilov, secretary of Ukraine's national security and defense council.

"But there is also a weapon called the Ukrainian spirit," he added. "Russian soldiers definitely don't have that. If necessary, there will be guerrilla warfare and other types of warfare so that we will definitely win this process. Moreover, I am convinced that we will win. We do not doubt it for a minute."

Dmitry, the Ukrainian captain, has been in the military for 13 years. He has two months of service left — a span that covers the U.S. intelligence projection of when Russia might be planning an offensive. The night before, someone in his unit was wounded, taken to the hospital with shrapnel in his arm and leg.

"Everyone has fear," he said. "The person who says he's not afraid is an idiot."

Serhiy Morgunov in Hranitne, Ukraine, and Mary Ilyushina in Moscow contributed to this report.