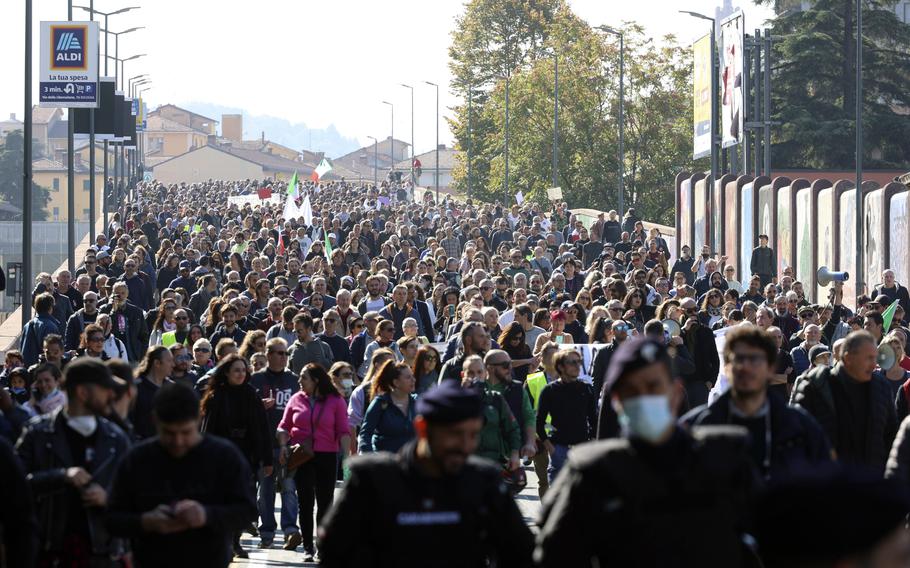 ROME — Protests erupted in Italy on Friday as one of the most stringent anti-coronavirus measures in Europe went into effect, requiring all workers, from magistrates to maids, to show a health pass to get into their place of employment.

Police were out in force, some schools ended classes early and embassies issued warnings of possible violence amid concerns that the anti-vaccination demonstrations could turn violent, as they did in Rome last weekend.

But by day's end, the protests appeared to have been largely peaceful, including one at Rome's central Circus Maximus where some protesters gave police officers flowers in a sign they meant no harm.

"We are not here to make violence or anything like that, we are here because they are taking away our rights and we can't even go to work anymore," complained protester Elena Campisi.

The so-called "Green Pass" shows proof of vaccination, a recent negative test or of having recovered from COVID-19 in the past six months. Italy already required them to access all sorts of indoor environments, including restaurants, museums, theaters, and long-distance trains.

But the addition of the workplace requirement has sparked heated debate and opposition in a country that was a coronavirus epicenter early in the pandemic, but has kept the latest resurgence in check through continued mask mandates and one of the highest vaccination rates in Europe.

"Today they are stepping on our Constitution," said an anti-vaccine protester, Loris Mazzarato. "I say NO to this discrimination."

He was among the hundreds of demonstrators in Trieste, where protests by port workers had threatened to impact commercial activities. Protesters shouted "Liberta" (Freedom) in a largely peaceful demonstration in Florence. 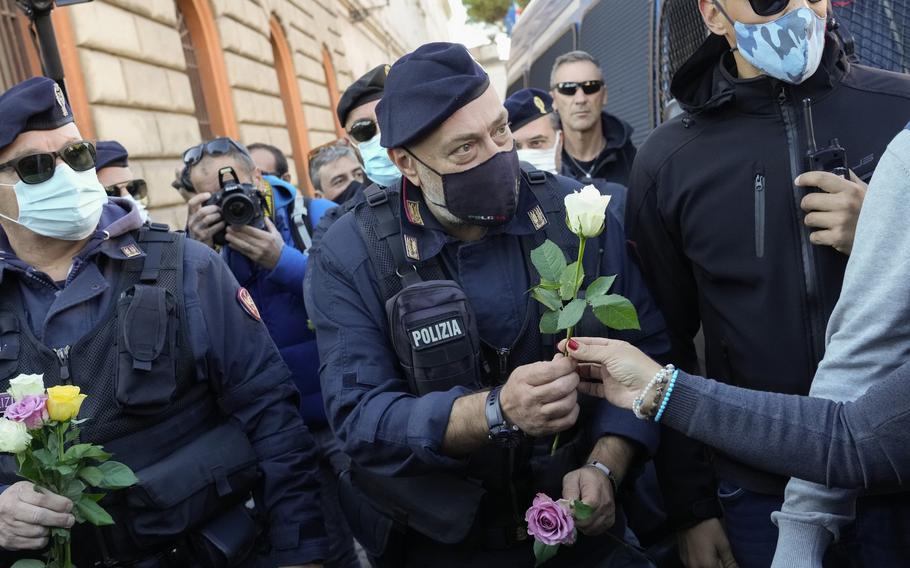 Demonstrators bring flowers to police officers, Friday, Oct. 15, 2021, at Rome’s Circus Maximus during a protest against a new anti COVID-19 measure requiring all workers to show a health pass to enter their place of employment. (Gregorio Borgia/AP)

The new rule in a country that imposed the first COVID-19 lockdown and production shutdown in the West imposes a burden on worker and employer alike. Electronic scanners that can read cellphone QR codes with the Green Pass were set up at bigger places of employment, such as the office of Italian Premier Mario Draghi and the headquarters of state railway company Trenitalia.

But at smaller places of work, from restaurants to tennis clubs, employers and managers had to download an app that can scan the codes. While it was unclear how strictly Italy would enforce the requirement, the fear of spot checks drove employers to comply, at least initially.

Sanctions for employers who fail to check employees range from 400 to 1,000 euros. A worker who fails to show a Green Pass at work is considered absent without justification; if the worker shows up anyway without a valid Green Pass, he or she could face fines from 600 euros to 1,500 euros.

But there were some seeming anomalies: Supermarket cashiers and hairdressers have to have a "Green Pass" to work, but their clients don't need one to shop or get a haircut.

The aim of the requirement is to encourage even higher vaccination rates beyond the current 81% of the population over age 12 who are fully inoculated. And if recent days were any indication, it was working: The number of first shots administered Thursday shot up 34% compared to the beginning of the week, Italy's virus czar reported Friday.

But for those people who can't or won't get their shots, the expanded pass requirement imposes a burden of getting tested every 48 hours just to be able to go to work. People with a proven medical condition that prevents them being vaccinated are exempt.

Some employers are offering free tests at work, but the government has refused calls to make testing free across the board. Currently rapid tests run from 8 euros for children to 15 euros for adults.

Testing capacity proved to be Italy's Achilles' heel during the first wave of the pandemic, and the governor of the Veneto region, Luca Zaia, has warned it won't be able to keep up with the new demand. He has called for the government to let people secure passes based on results from at-home test kits rather than having to go to a pharmacy for a rapid test.

"If the law says people have the right to work with a test every 48 hours, they have to guarantee this right," Zaia said.

For some opponents, the requirement is disproportionate to the current need: Italy has kept the latest delta variant-fueled resurgence largely under control through continued mask adherence social distancing norms, reporting around 67 cases per 100,000 inhabitants over the past two weeks and a daily official death toll that hasn't exceeded 70 for months. But proponents say the requirement will keep workplaces safe and allow Italy's economy, which shrank 8.9% last year, to further rebound.

The new rule is not a vaccine mandate, since a negative test or proof of being cured of COVID-19 are other ways to get it. In Italy, only health care workers are required to be vaccinated, and teachers and school administrators have had to have a "Green Pass" to work since Sept. 1.

But the requirement for all categories of workers went beyond other European countries. France has had a "virus pass" since the summer to access indoor activities and events, but it isn't required for all employees to get into work, just those who interact with the public. Full vaccination is required for health workers, retirement home workers and workers caring for the disabled, as well as psychologists, osteopaths, chiropractors and medical students. Fire officers and some soldiers are also obliged to be vaccinated.

In Greece, employers must maintain a record of the vaccination status of workplace staff. Workers must carry a vaccination certificate that can be scanned using a government application or pay for weekly testing.

In the U.S., the Biden administration imposed sweeping rules in September mandating all employers with more than 100 workers to require them to be vaccinated or test for the virus weekly, affecting about 80 million Americans. Another 17 million workers at health facilities that receive federal Medicare or Medicaid also have to be fully vaccinated, while vaccination is required for employees of the executive branch and contractors who do business with the federal government — with no option to test out.

Not even the Vatican was spared opposition to the new requirement: Three Swiss Guards quit and another three were suspended after they refused to get vaccinated before the Vatican's green pass requirement went into effect.