US, France edge closer to healing of rift after AUKUS spat 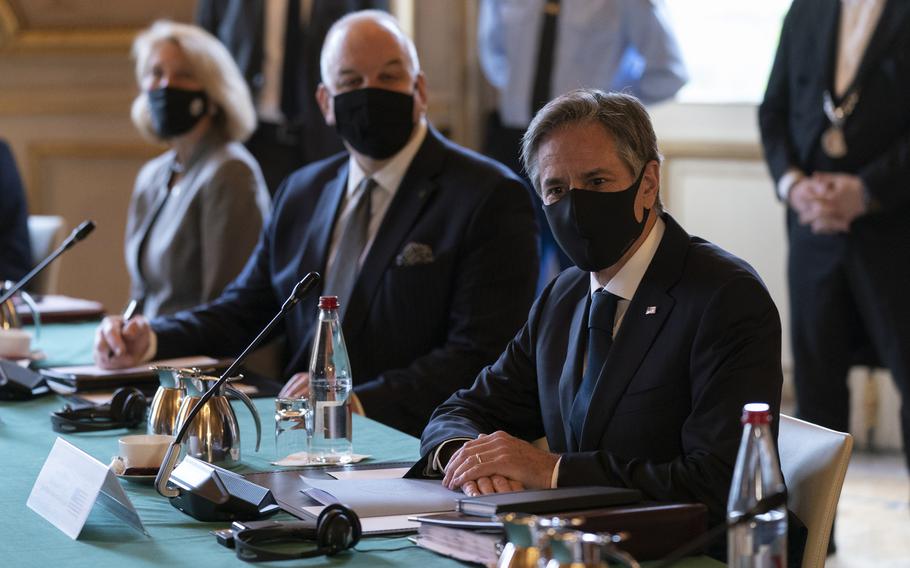 French President Emmanuel Macron and U.S. Secretary of State Antony Blinken met in Paris to explore ways to overcome the rift over the deal, which scuttled a multibillion-dollar French submarine contract with Australia and led Macron's government to take the unprecedented step of recalling its ambassador to the U.S.

Macron and Blinken explored potential U.S.-French cooperation in the Indo-Pacific and other areas in the roughly 40-minute one-on-one session, according to a senior U.S. State Department official.

Shortly after their engagement, the White House announced in a statement that President Joe Biden's national security adviser, Jake Sullivan, would meet his French counterpart, Emmanuel Bonne, in Paris later this week "as part of our ongoing consultations on shared bilateral and regional interests."

Macron and Blinken's meeting was the highest-level in-person contact between the two countries since the controversary erupted last month with the Sept. 15 announcement of a three-way agreement between Australia, Britain and the U.S., known as AUKUS, that pointedly left out France and other European nations.

The State Department official said the two discussed possible joint projects that could be announced by Macron and President Joe Biden when they meet this month at a specific date and venue that has yet to be decided. Macron and Biden agreed to try to repair the damage in a Sept. 22 phone call.

The White House statement said Sullivan and Bonne would further explore those projects in "preparations for the meeting of President Biden and President Macron in Europe later this month."

The State Department official didn't elaborate on what those projects might be, but said they would likely involve the Indo-Pacific and Western efforts to blunt China's growing there and elsewhere, NATO and other trans-Atlantic objectives involving the European Union, and counterterrorism cooperation in Africa's Sahel region.

The official said Macron and Blinken had agreed to use the spat as an opportunity to "deepen and strengthen coordination" and characterized the talks as "very productive," while allowing that "a lot of hard work remains ahead."

The official spoke to reporters on condition of anonymity to discuss the closed-door talks between Macron and Blinken at the Elysee Palace that hadn't appeared on Blinken's official schedule for the day.

The roughly meeting came amid repeated French demands for the U.S. to restore trust that was ruptured with the announcement of a the AUKUS deal.

A French official, speaking under customary anonymity, said the "at length, face-to-face meeting" came immediately after Blinken had seen Bonne. Bonne, the official said, saw Blinken "in order to study the ways of reengaging the relationship following the recall of the French ambassador, and to help restore confidence between France and the United States."

U.S. officials have acknowledged that the AUKUS announcement was handled poorly and could have benefitted from coordination with France and other members of the European Union, all of which were left out. They have also signaled a desire to make amends, although they have suggested France's rage is an overreaction.

France responded with fury and briefly recalled its ambassadors to Washington and Canberra in an unprecedented display of pique.

French officials called it "a stab in the back" by allies and expressed disappointment that it had happened after Biden had proclaimed "America is back" and pledged to restore and value trans-Atlantic relations that had soured during the Trump administration.

The French have said repeatedly it will take much time and work to overcome the rift and that the incident underscores the need for Europe to develop its own security and defense plans as well as adopting a European strategy to counter growing challenges from China.

Blinken is in the French capital for a two-day international economic conference that has been overshadowed by the AUKUS controversy that erupted with the announcement of the project. Blinken's first meeting in Paris was with French Foreign Minister Jean-Yves Le Drian, whom he counts as a personal friend.

Ahead of his visit, his second to France as secretary of state but first since the rupture, Blinken met Friday with French Ambassador Philippe Etienne on his return to Washington after having been recalled to Paris by Macron.

Blinken, a fluent French speaker who grew up and went to high school in Paris, has expressed disappointment that the France has reacted so harshly to AUKUS. He and others have suggested some degree of French anger is related to domestic French politics and the shifting dynamics within the EU, which will soon see Angela Merkel depart as the leader of Germany after 16 years in power.

The ostensible reason for Blinken's trip to France, which had been planned well before the AUKUS ruckus, is to co-chair a ministerial meeting of the Paris-based Organization for Economic Cooperation and Development on Tuesday and Wednesday about climate change and security.

Former Secretary of State and current U.S. climate envoy John Kerry is also attending the OECD talks, which are taking place just weeks before the next U.N.-backed international conference on climate, in Glasgow, Scotland.

Sylvie Corbet contributed to this report.