From an indoor rifle range to ‘neighborhoods,’ Ramstein High shows off DODEA's new generation of schools 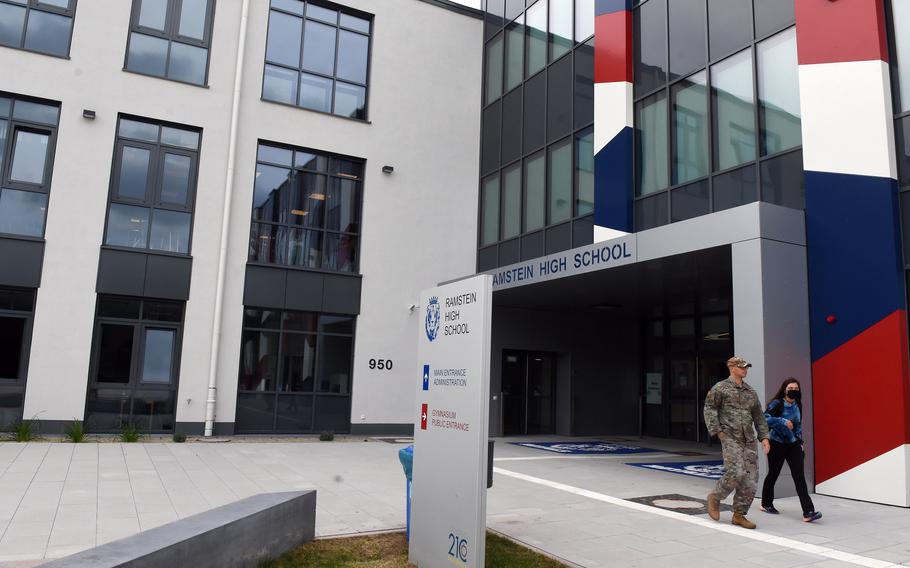 Buy Photo
The new Ramstein High School cost $98.8 million and was built for about 1,100 students. A ceremony on Sept. 14, 2021, celebrated the school’s opening. (Jennifer H. Svan/Stars and Stripes)

RAMSTEIN AIR BASE, Germany — Students and teachers have quickly adapted to life at the new $98.8 million Ramstein High School, one of a number of schools being built in Europe with amenities well beyond simple classrooms and lockers.

The Ramstein school built for 1,100 students has an indoor rifle range for Junior ROTC cadets, artificial turf for kicking around soccer balls, tall windows, spotless white walls and an overall look that barely resembles what many parents remember from their high school days.

“This may be the nicest public high school you ever attend,” said Col. Patrick Dagon, the commander of U.S. Army Corps of Engineers Europe District.

Dagon was among the U.S. and German officials who marked the school’s opening at a ceremony Tuesday, about two weeks after the school year began. Also in attendance was Thomas Brady, director of the Department of Defense Education Activity.

The first days were exciting “but a little confusing,” said Kay Golden, the student council president, as she navigated the three-story building, which is located a few minutes’ walk from the old school building that was occupied beginning in 1982.

Golden said students differ on their choices of favorite features of the new school. The “freshmen academy” with a rooftop balcony and the spacious gymnasium are big hits, she said.

Brady praised the Defense Department's commitment to ensuring that military members’ children have the best schools. That has required $4 billion over 10 years for school construction and renovation, most of that overseas, DODEA has said.

Ramstein “is the brand-new flagship of DODEA” and a “magnificent building,” with the largest gymnasium in the DODEA system, Brady said. 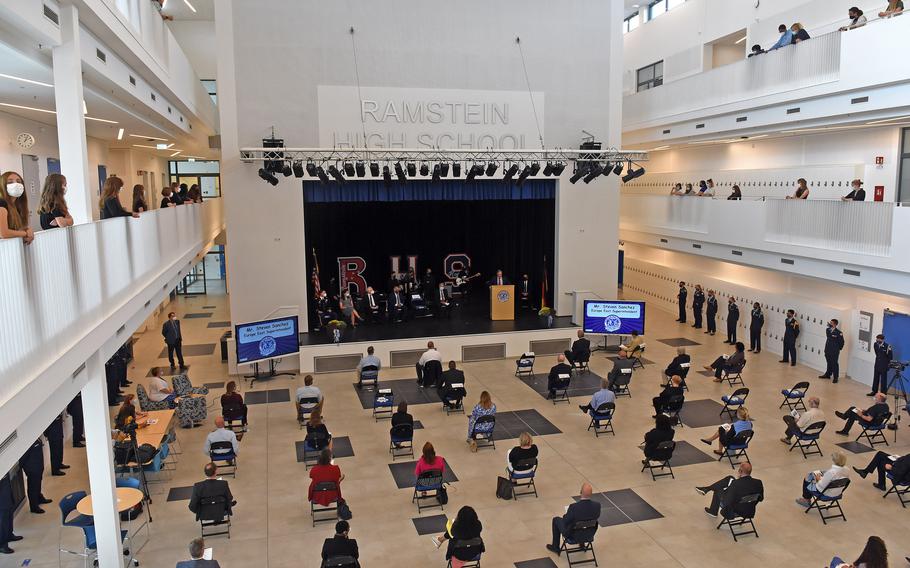 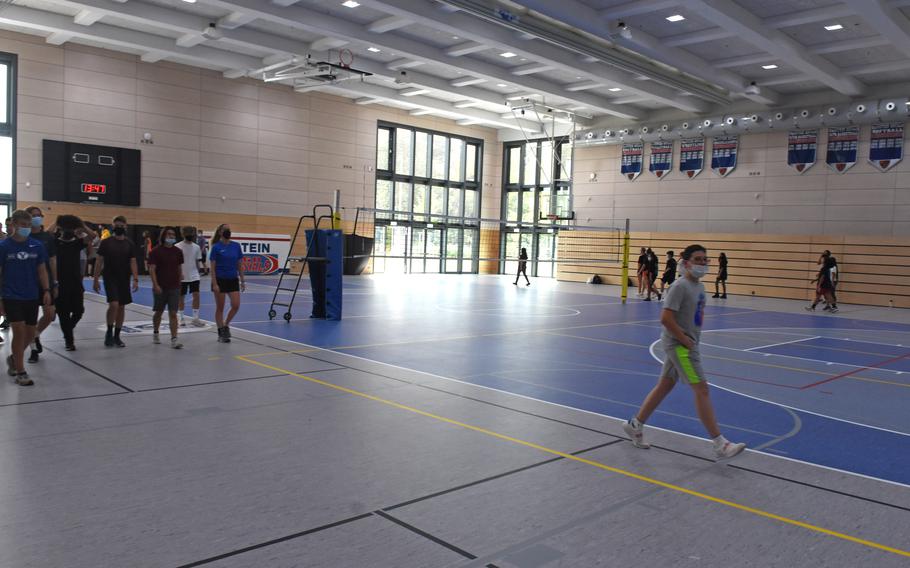 Buy Photo
Students exercise in the gymnasium, the largest in the Defense Department school system, at the new Ramstein High School on Sept. 14, 2021. (Jennifer H. Svan/Stars and Stripes) 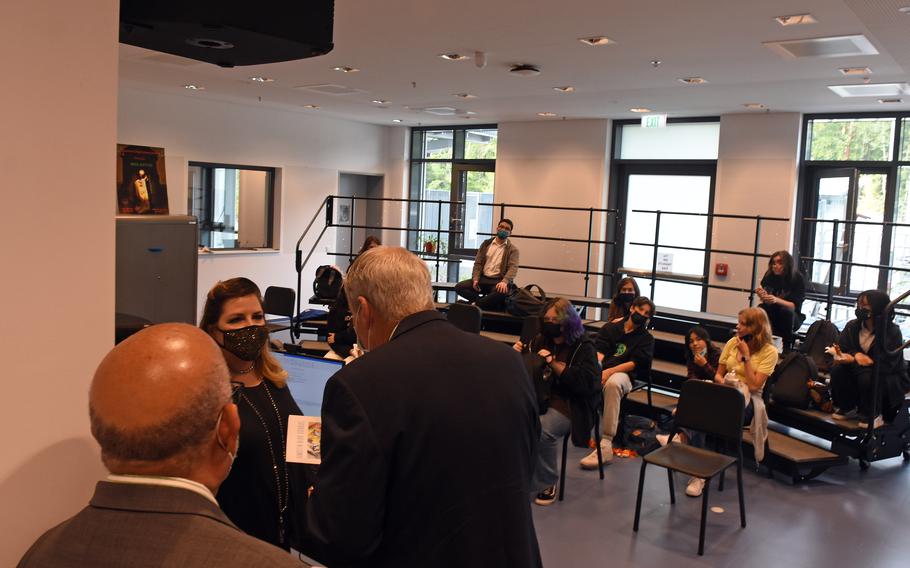 Buy Photo
Thomas Brady, third from left, director of the Department of Defense Education Activity, visits a classroom at the new Ramstein High School on Sept. 14, 2021. A ribbon-cutting celebrated the opening of the $98.8 million school, which held its first day of classes Aug. 25, 2021. (Jennifer H. Svan/Stars and Stripes)

Brady will visit four new DODEA schools in Germany this week. Ribbon-cutting ceremonies are planned at Kaiserslautern and Wiesbaden elementary schools, and a dedication ceremony is scheduled for Friday at Spangdahlem middle and high schools, which opened more than a year ago.

New schools are under construction in Brussels, Grafenwoehr and Stuttgart, according to the U.S. Army Corps of Engineers Europe District.

Eight new schools are in design, including five in the Kaiserslautern Military Community. A new Ramstein Middle School will be built across the street from the new high school after vacant housing is demolished, officials said.

All the schools have trademark design features, such as open classrooms grouped in “neighborhoods” with common areas in which students can study or collaborate. Teachers go to the students instead of occupying a single classroom.

The culinary arts kitchen and classroom are state of the art, said instructor Sean Lucas, a professional chef. But he wishes it had more cooking space, including larger ovens, which he told Brady.

“You get one opportunity, so I had to say it,” Lucas said, adding that “we’ll make it work.”

For some kids, just being at school is a thrill. Ryan Newburn, a freshman who transferred from Texas, spent eighth grade in virtual school.

“I’m happy that I now get to meet other people and have a more fulfilling experience as a freshman,” Newburn said.