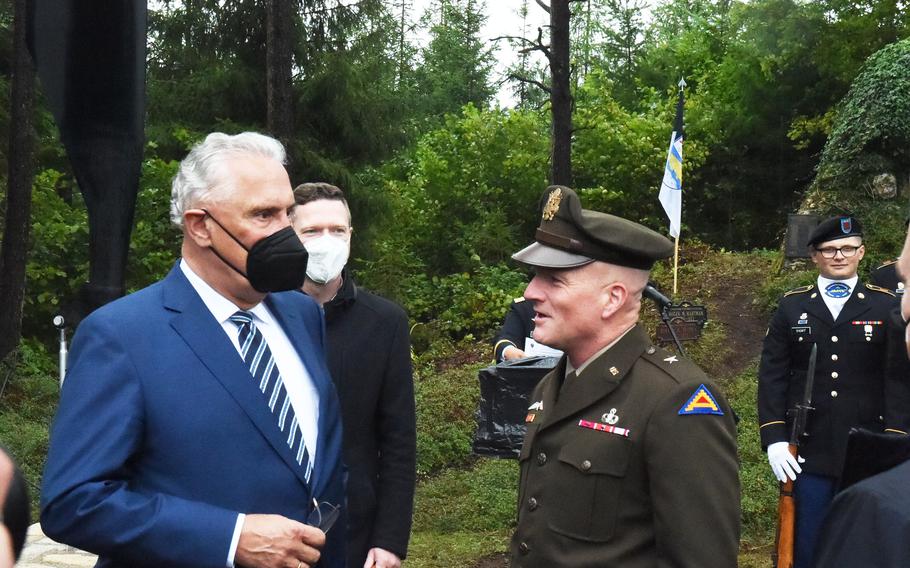 GRAFENWOEHR, Germany — A small Bavarian city paid tribute Wednesday to the victims of a fiery helicopter crash in which more than three dozen American soldiers died 50 years ago.

Attendees at the ceremony in Pegnitz, which is home to about 15,000 people, included victims’ relatives, military personnel and government officials.

Among them was John Hutson, who in 1971 was a 17-year-old private and a mortarman. He was one of the soldiers sent to take the place of those who had died in the helicopter crash.

“When we dedicated the memorial two years later, I was the narrator for the ceremony and got to read all the names,” Hutson said. “So it was special knowing they were going to have this ceremony today.” 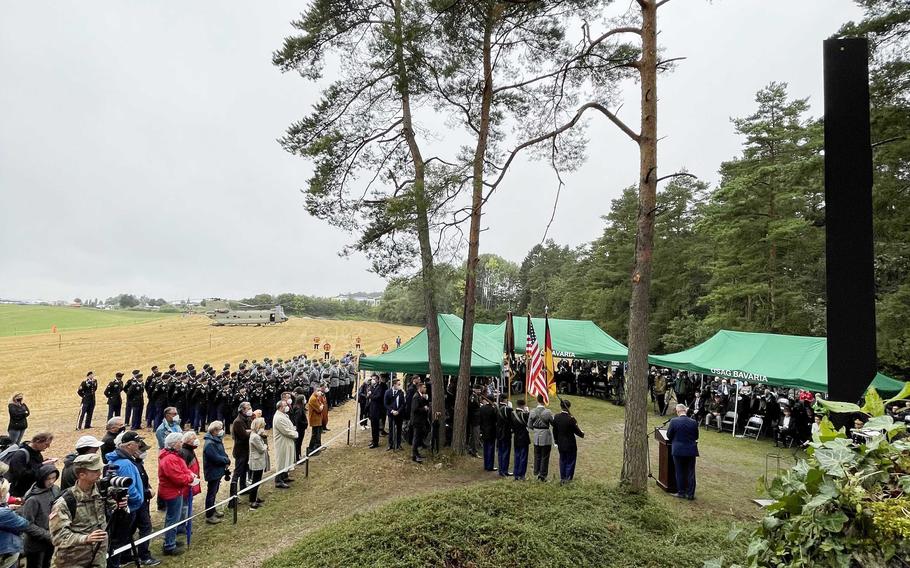 Buy Photo
Attendees gather around the Pegnitz memorial site, Aug. 18, 2021, during the 50th anniversary ceremony for the helicopter crash that claimed the lives of 37 U.S. soldiers near Pegnitz, Germany. (Immanuel Johnson/Stars and Stripes) 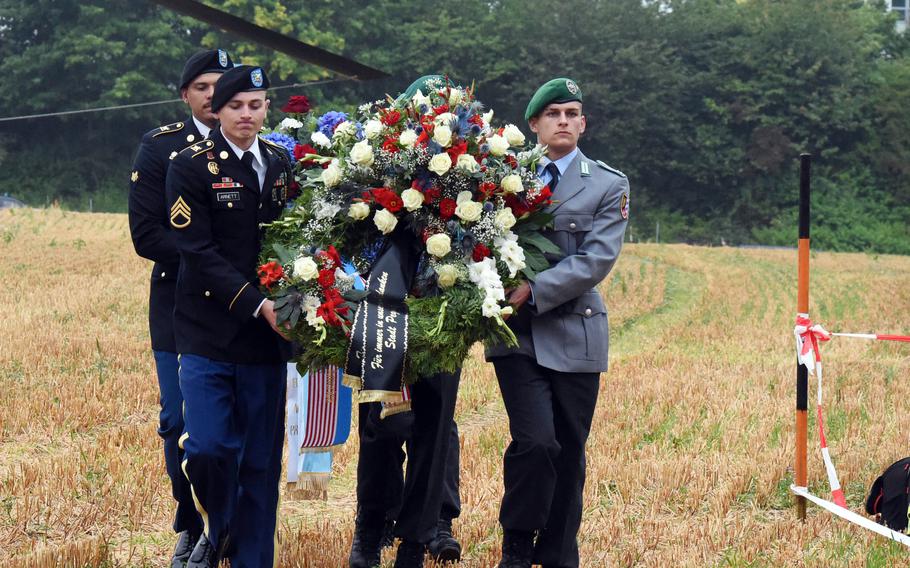 Buy Photo
U.S. and German soldiers carry wreaths Aug. 18, 2021, from a CH-47 Chinook helicopter to the memorial site for soldiers killed in a Chinook crash 50 years ago, near Pegnitz, Germany. (Immanuel Johnson/Stars and Stripes) Buy Photo
Family members gathered in Pegnitz, Germany, pay tribute to the victims who died in a 1971 helicopter crash near the Bavarian town. (Immanuel Johnson/Stars and Stripes)

The crash took place close to the autobahn from Munich to Berlin. It’s about 10 miles from the Grafenwoehr Training Area, which is the largest U.S. Army training area in Europe.

Stars and Stripes reported at the time that the crash was due to a crack in the rotor blade caused by a “corroded pit about the size of a finger.” The crack caused the CH-47 Chinook helicopter to plunge to the ground. 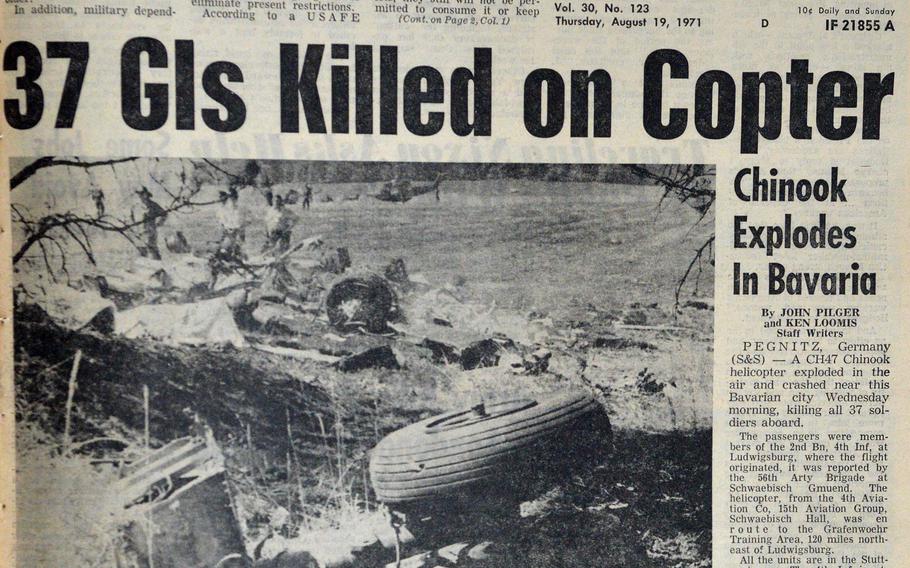 Buy Photo
The Stars and Stripes Aug. 19, 1971 front page with the news of a Chinook helicopter crash that killed 37 soldiers in Bavaria the day before. Family members and others recently gathered near Pegnitz, Germany, to pay tribute to the victims on the 50th anniversary of the tragedy. (Stars and Stripes)

The victims burned to death, according to the Bavarian police who were at the scene. One of the first Germans there saw “four badly charred bodies still fastened to their seats.”

One of the victims, Pfc. Arthur Kearney, was a mortarman with 2nd Battalion, 4th Infantry Regiment, 56th Field Artillery Brigade. Several relatives of the New York native were on hand Wednesday in Pegnitz to honor him and remember his service.

Peter Kearney, one of Arthur’s siblings, wore his brother’s uniform at the ceremony.

“He was two years older than me in the Army, and when the accident happened, I was in the Navy stationed in Antarctica,” Peter Kearney said. “I couldn’t come home for the funeral because there are no flights for six months in the dark. I came home about a month after it was all over.” 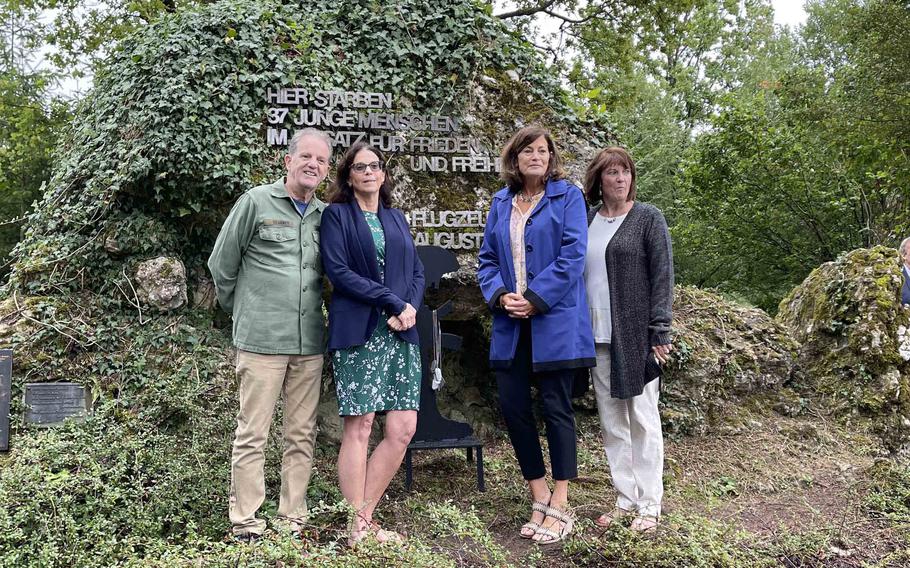 Buy Photo
Family members of Pfc. Arthur Kearney, a mortarman who died with 36 other soldiers in a helicopter crash 50 years ago, pose for a photo on Aug. 18, 2021, near Pegnitz, Germany. (Immanuel Johnson/Stars and Stripes)

Peter was with some buddies drinking beer when his commanding officer told him that the chaplain wanted to speak with him. When the chaplain informed him of the news, Peter asked which one of his three brothers had been killed.

For him, the memorial ceremony in Pegnitz served as a substitute for the funeral he couldn’t attend.

Another of Kearney’s siblings, Laurene Gagliano, said she was moved by the homage that the people of Pegnitz paid to her brother and his comrades.

She said that when Arthur joined the service, it was during the time of the draft lottery.

“Arthur joined the Army because he knew he was going to get drafted, so he said he was not going to wait and volunteered and went,” Gagliano said. “My parents are very proud (of his service), because my father was a World War II vet.”

In June, the 12th Combat Aviation Brigade presented a CH-47 Chinook rotor blade to the people of Pegnitz. The blade will eventually become part of a memorial at the crash site.