‘These are our neighbors’: US airmen who survived catastrophic floods help German villages recover

by
Jennifer H. Svan and Marcus Kloeckner
• Stars and Stripes • August 2, 2021
This story has been corrected. 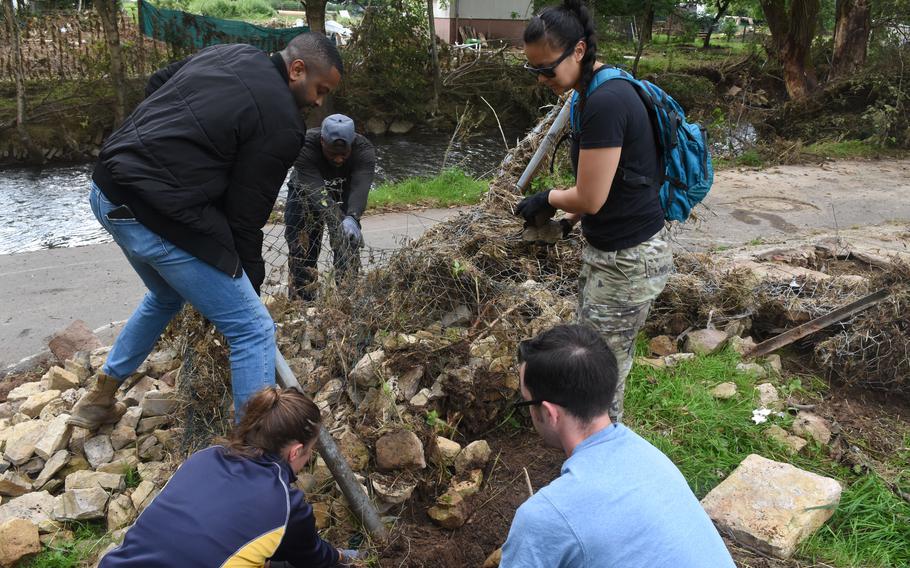 Buy Photo
Airmen from Spangdahlem Air Base, Germany, work to untangle a metal fence from a pile of rocks that washed up on the banks of the Nims River in Rittersdorf, Germany, during the severe flooding last month. More than two dozen airmen from the base volunteered to help clean up along the river banks on July 31, 2021. (Jennifer H. Svan/Stars and Stripes)

RITTERSDORF, Germany — The Nims River flows through the heart of this village in the rural Eifel region, skirting a moated castle that has stood since medieval times.

On Saturday, the waterlogged stone fortress was the meeting point for more than two dozen U.S. military personnel, who volunteered to help the town of about 1,400 clean up in the aftermath of Europe’s severe flooding last month.

Rittersdorf was spared the deaths and the worst of the destruction caused by the floods, which killed about 180 people in western Germany and left thousands homeless.

But a water line above the castle’s first floor windows shows where the Nims crested at over 6 feet on July 14 and 15, pouring into the castle and homes along the banks.

The river uprooted trees, fences, street signs and anything else in its path in the worst flooding longtime residents say they have ever seen.

Village leaders last week reached out to the U.S. military community, asking for help in cleaning up debris still scattered in the basin.

“We know that they are (our) friends in hard times,” Otmar Koch, the deputy mayor of Rittersdorf, said of the Americans. “We need a lot of help here.”

No one in the village was hurt, but Koch said about two dozen families in the area lost their homes.

“I got lucky. I had a stream of water going through my basement,” said Rachael Kohlwey, a civilian aircraft mechanic at Spangdahlem. “But my neighbors were dealing with a meter and a half, 2 meters of water, and they’ve lost everything. It makes you want to cry.

“These are our neighbors, our friends, we’re embedded in these communities,” Kohlwey said, “so when you see a catastrophe like this, you can’t help but want to help.”

Senior Airman Calixto Rodriguez, 24, an aircraft maintainer with the 52nd Aircraft Maintenance Squadron, said he helped clean up last month in Ehrang, a village near Trier that was flooded by the Kyll River.

“It was bad,” he said. “After I went there, I told everybody that I knew, the people there are struggling. All the streets were just covered in filth and glass and dirt. I wanted to come back and help out.” 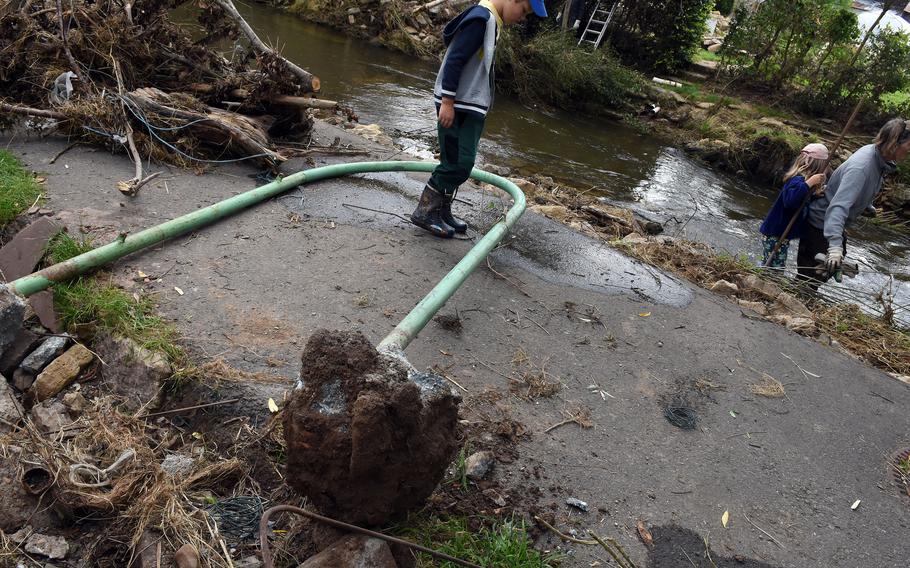 Buy Photo
A boy steps over a metal pole uprooted during the severe floods in mid-July along the Nims River in Rittersdorf, Germany, on July 31, 2021. (Jennifer H. Svan/Stars and Stripes) 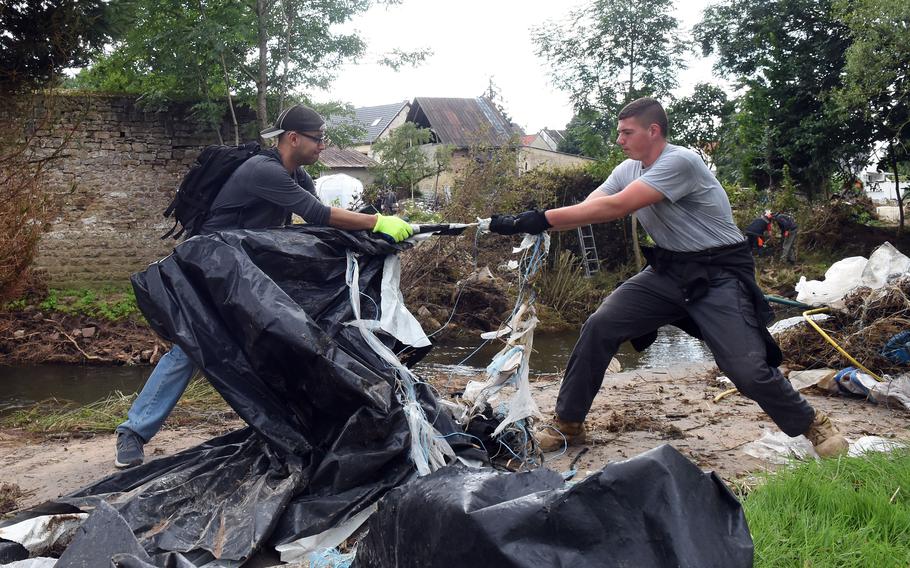 Buy Photo
Senior Airman Calixto Rodriguez, left, and Airman Kyle Koury try to break apart a piece of debris while cleaning up the banks of the Nims River in Rittersdorf, Germany, on July 31, 2021. More than two dozen airmen from Spangdahlem Air Base volunteered to help clean in the aftermath of last months severe flooding in western Germany. (Jennifer H. Svan/Stars and Stripes) 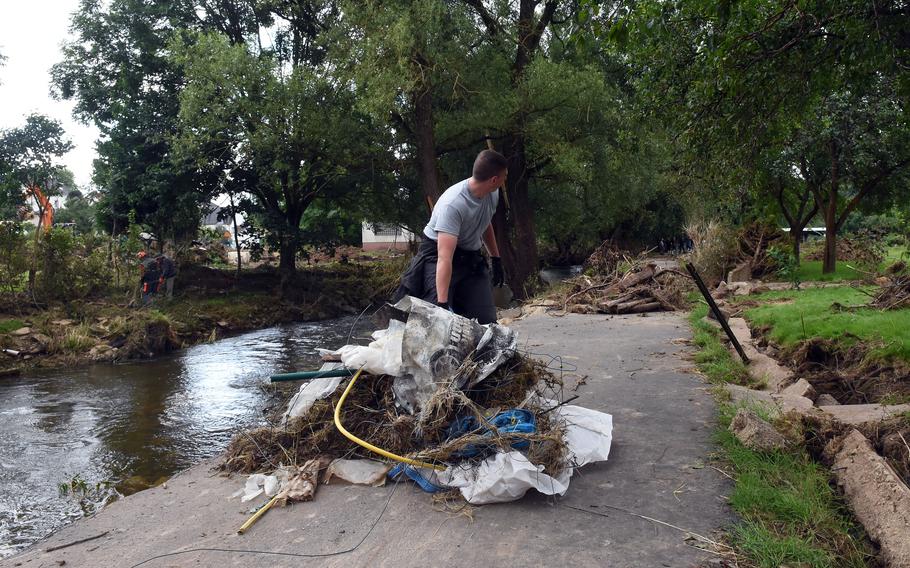 Buy Photo
Airman Kyle Koury of Spangdahlem Air Base moves a pile of debris along a path next to the Nims River in Rittersdorf, Germany, on July 31, 2021. More than two dozen airmen from the base volunteered to help clean up the area in the aftermath of last months severe flooding in western Germany. (Jennifer H. Svan/Stars and Stripes) 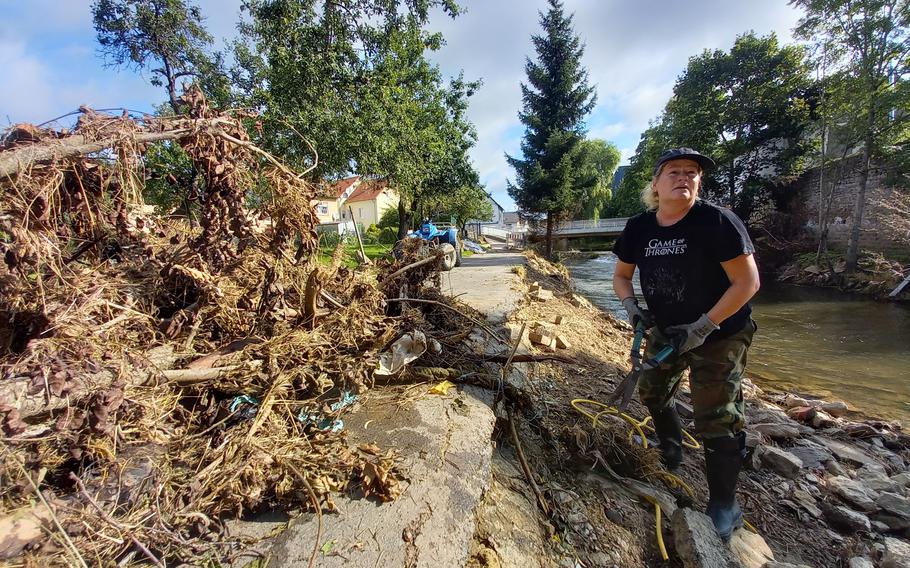 Buy Photo
Stephanie Anderons, a German married to a retired American airman, helped clean up parts of the river bank on July 31, 2021, in Rittersdorf, Germany. Western Germany saw some of its worst flooding in decades last month. (Marcus Kloeckner/Stars and Stripes) 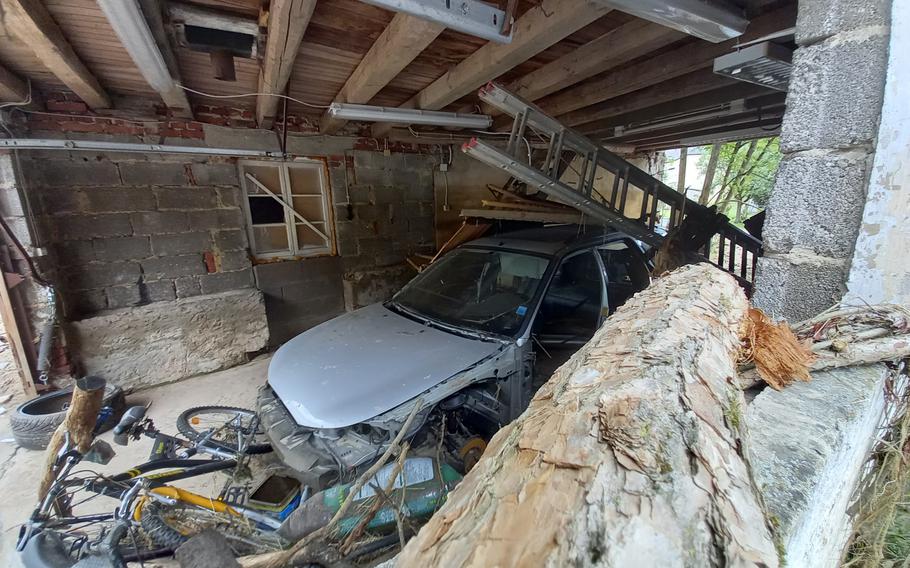 Buy Photo
Damage from the mid-July flooding in Rittersdorf, Germany, on the Nims river, on July 31, 2021. Volunteers from the U.S. air bases in Spangdahlem and Ramstein came to the town to help clean up the damage. (Marcus Kloeckner/Stars and Stripes) 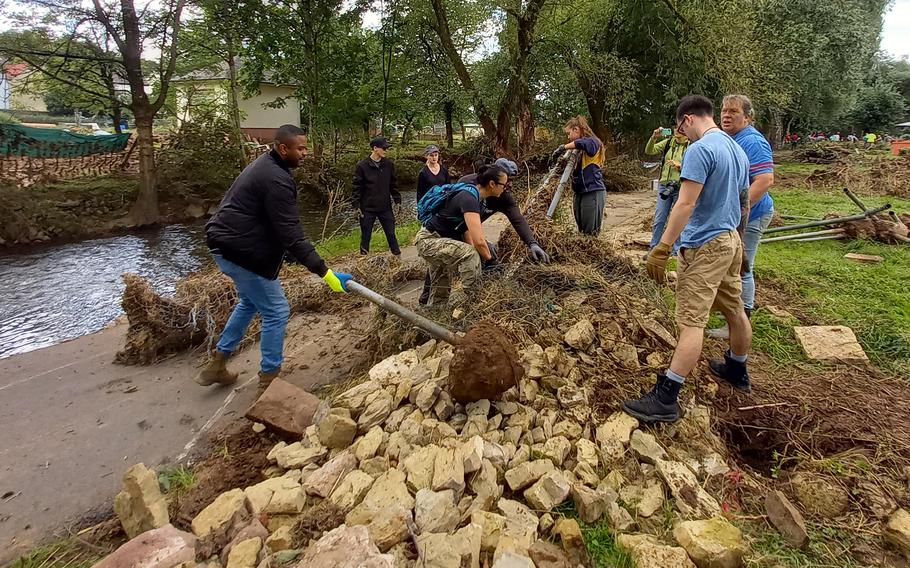 Buy Photo
A group of volunteers help clean up the town of Rittersdorf, Germany, July 31, 2021. People from the Spangdahlem and Ramstein military communities volunteered their time following the mid-July flooding of the Nims River. (Marcus Kloeckner/Stars and Stripes) Buy Photo
Senior Airman Calixto Rodriguez of Spangdahlem Air Base, Germany, removes trash from the banks of the Nims River in Rittersdorf on July 31, 2021. More than two dozen airmen from the base volunteered to help clean up the river in the aftermath of last month’s severe flooding in western Germany. (Jennifer H. Svan/Stars and Stripes) 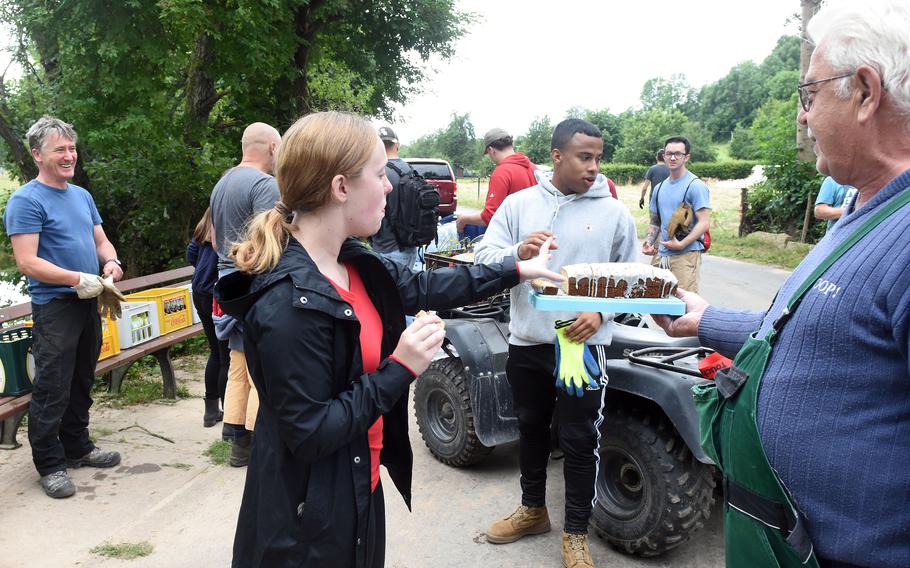 Buy Photo
Residents of Rittersdorf, Germany, thank airmen with refreshments for helping them clean up their village in the aftermath of severe flooding last month. More than two dozen airmen from Spangdahlem Air Base and a few from Ramstein Air Base helped villagers clean up debris along the Nims River on July 31, 2021. (Jennifer H. Svan/Stars and Stripes) 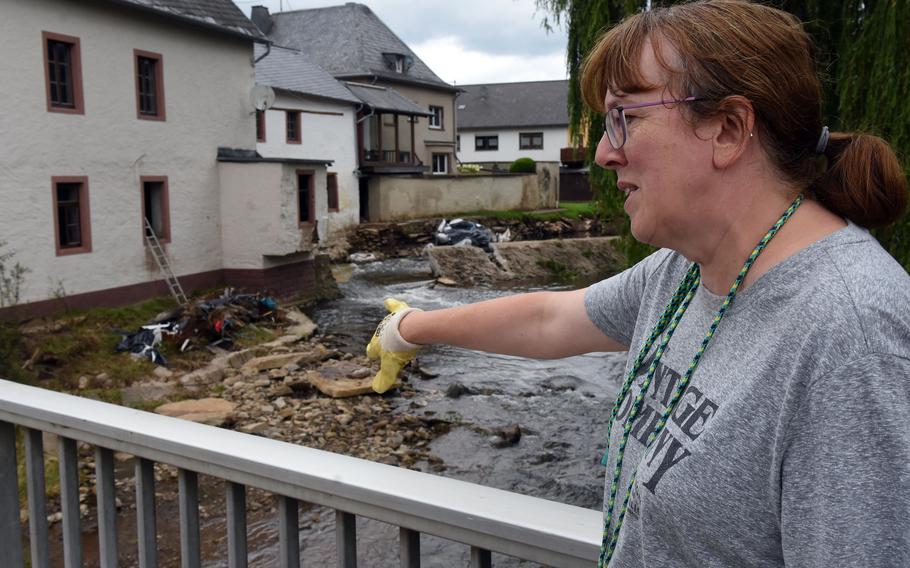 Buy Photo
Doris, a resident of Rittersdorf, Germany, who declined to provide her last name, stands on a bridge overlooking her familys mill and a house her family rents to Americans on the banks of the Nims River, July 31, 2021. Both buildings were damaged during historic floods last month. Doris said the river at its peak covered the bridge on which she was standing. (Jennifer H. Svan/Stars and Stripes) 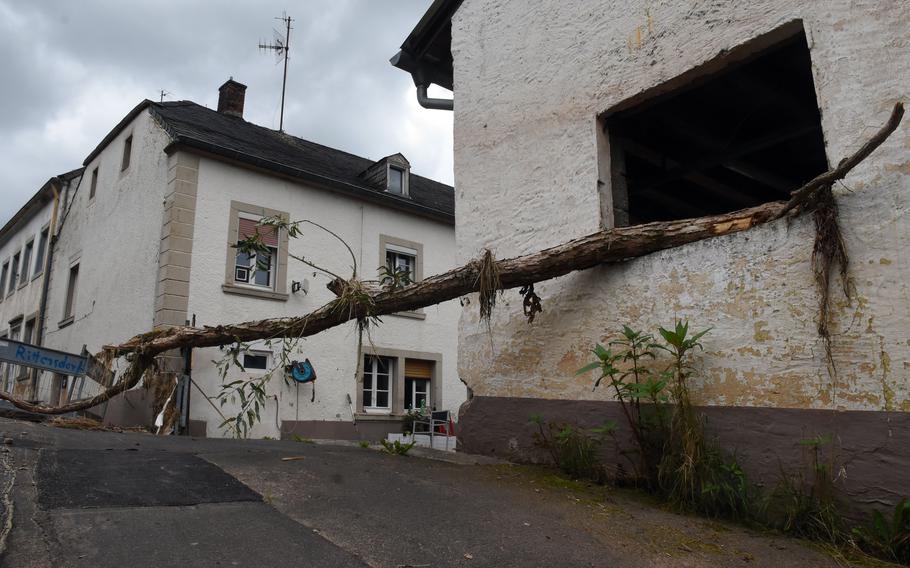 Buy Photo
A tree sticks out from a window next to the Nims River in Rittersdorf, Germany, on July 31, 2021. The river rose to more than 6 feet and damaged homes and buildings along the river earlier last month, in flooding that residents say was the worst in their lifetime. (Jennifer H. Svan/Stars and Stripes) 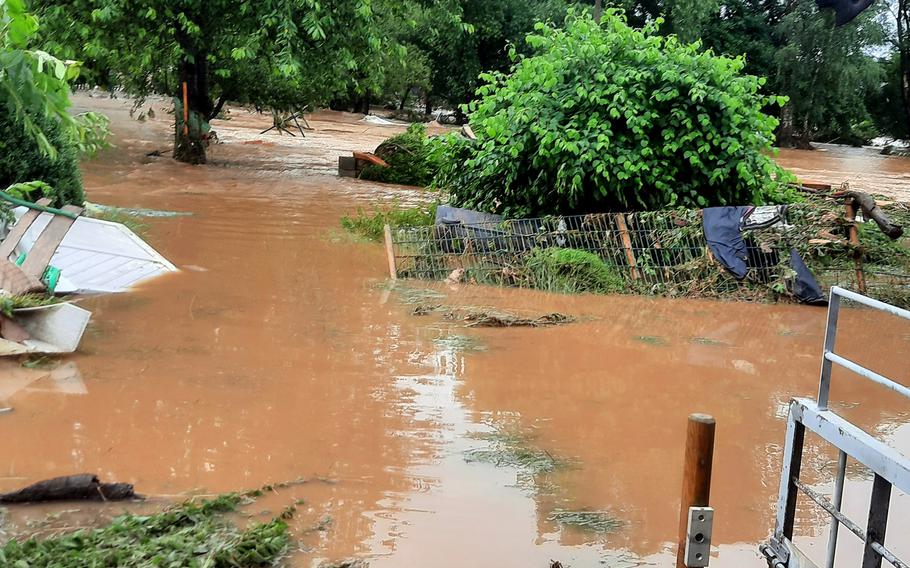 Patrik Aubart said the flood waters first came through the yard at his home in Rittensdorf, Germany on July 15, 2021. More and more water came, he said of the Nims River flooding. Then we realized that we had to get out. (Patrik Aubart)

The mud along the Nims’ banks had dried by Saturday. Airmen sorted the debris into wood, metal and other garbage, piles which the Germans loaded into trailers hitched to tractors to be dumped or burned.

Many residents were also out cleaning up Saturday. The Americans’ help allowed them more time to work on their yards and their homes, some of which were still full of mud and debris, they said.

The flood came quickly, recalled Pascal Schoenhofen, who lives near the Nims. Sandbags couldn’t hold back the water, which started pouring into his house from two sides.

“Then it was too late,” he said. “Even the firefighters were helpless at this point.”

Patrik Aubart, who lives close to Schoenhofen, said the water first came through the yard. “More and more water came,” he said. “Then we realized that we had to get out.”

The state will provide $3,000 in direct help, “but that is nothing compared to the damage,” he said.

From a bridge overlooking the Nims, Doris and her son, Kilian, surveyed the damage to a former mill that has been in the family for 400 years, and a house they rent to Americans.

The house was built in 1934 at a height thought safe from flooding, they said.

The river crested the bridge and water filled the house’s first floor, said Doris, who asked that only her first name be used. The original kitchen tiles and wood flooring were destroyed.

The day of the flood was the first night in the house for her American tenants, a military family from Spangdahlem, she said.

“We have to renovate everything,” she said. “Hopefully the family wants to come back.”

Patrik Aubart’s first name was spelled incorrectly in a previous version of this story.