‘We have nothing’: Grief, shock and resilience along the flood-ravaged banks of a German river 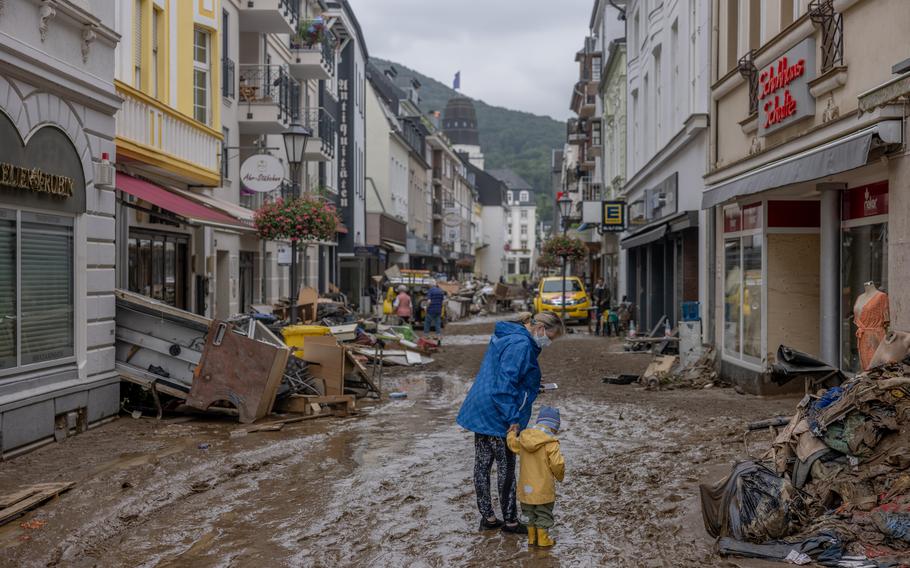 BAD NEUENAHR-AHRWEILER, Germany — In village after village along what was once a string of idyllic riverside communities in western Germany, the scenes Friday bore witness to nature’s power as floodwaters receded enough to give a glimpse of the scale of the damage — and what it will take to rebuild.

Cranes picked cars out of trees, tossed there by the surging waters as though they were little more than pebbles. Roads were cleaved apart. Bridges were swept away. Homes were filled with thick layers of dark river mud as people’s belongings — the private details of their lives — were swept into the street.

Police teams were still clearing out the dead.

“Don’t go in there!” shouted Gudrun Rachel, a resident of an apartment block overlooking the Ahr River in Bad Neuenahr-Ahrweiler, a picturesque spa town about 30 miles southeast of Cologne that was at the epicenter of the flooding fed by torrential rains that began late Wednesday.

A policeman flanked the door as they waited to remove the body of a neighbor.

“The whole city, it’s gone,” said Rachel. “We have no furniture, no place. We have nothing. I’m too old to start again.”

At least 62 people have died along this stretch of the Ahr River, according to police, making it the hardest-hit area in Germany in flooding that claimed more than 120 lives in Germany and Belgium.

The Ahr, a tributary to the Rhine, spread hundreds of yards over its banks, engulfing everything in its path. Police say they cannot give accurate figures on the people who are still missing.

Just around the corner, more dazed residents picked through what they had left. 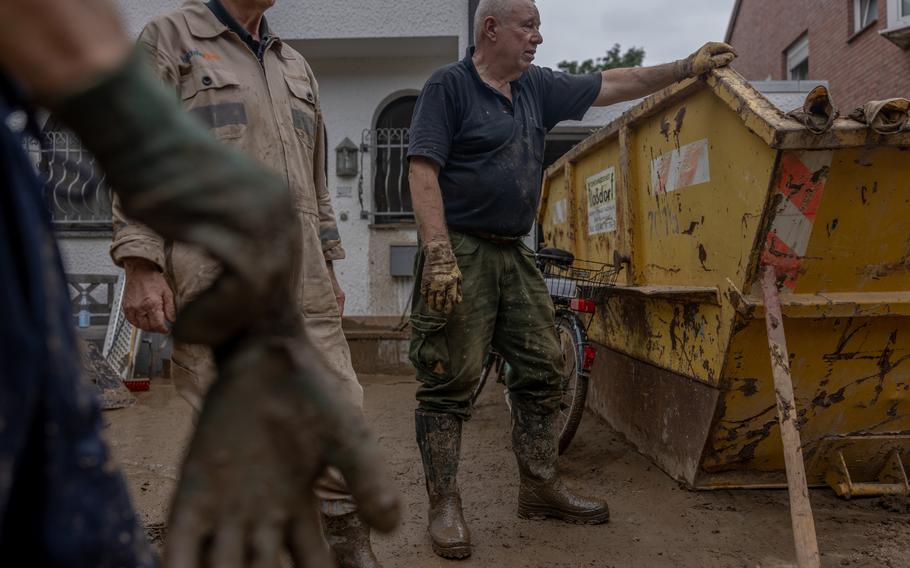 Horst Schmeing cleans the flood-damaged house of his nephew in Bad Neuenahr, Germany on July 16, 2021. (Daniel Etter/For The Washington Post)

Sian Oelschlaeger, 49, and her family tried to salvage what they could, scraping the mud off glasses and vases and laying them out on the pavement in front of the family home.

Oelschlaeger been away from home when the flooding started, separated from her husband and two daughters. She had messages from them saying they were OK, but she still worried.

“The situation was so dynamic,” she said.

Scores of others are still waiting for news.

The pace of the waters crest had caught many in the area by surprise.

At first, the water that had seeped over the edge of the Ahr River hadn’t seemed so threatening. But within half an hour, it was knee height.

Her father sent Manon and her sister to a friend’s house for safety, joining them himself when the windows in the basement burst. 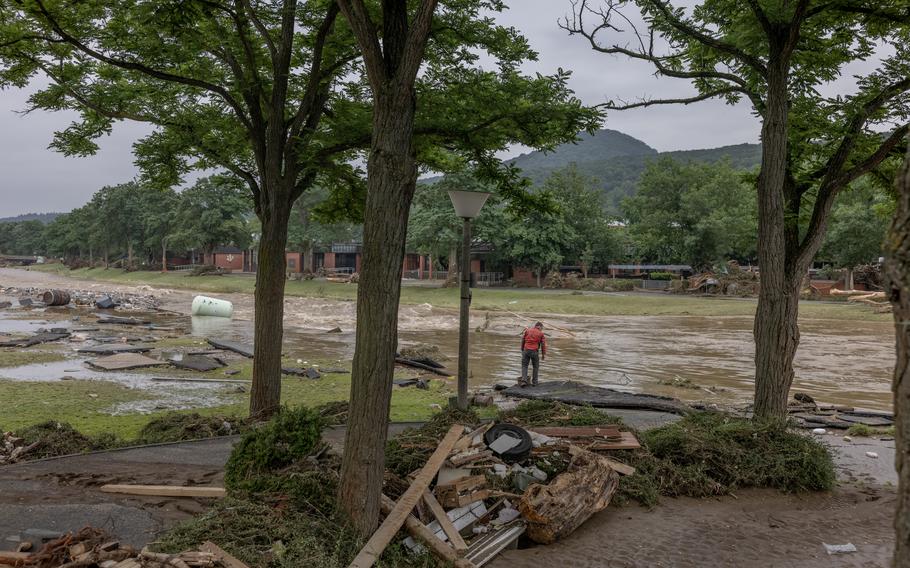 A man stands by the overflowing river Ahr in Bad Neuenahr, Germany, on July 16, 2021. (Daniel Etter/For The Washington Post)

A little down the street, a firetruck lay wedged in a huge crack in the road, a reminder of the furious efforts to rescue residents just hours before. Helicopters still buzzed overhead, scanning for anyone still waiting for rescue on rooftops and debris that poked above the waters.

Convoys of ambulances and army trucks wound their way through the country roads along the riverbank. But some areas said they were still receiving little assistance.

In the village of Sinzig, about three miles further downriver, families and friends banded together to clear houses. The water was it’s highest in 100 years, said Andreas Geron, Sinzig’s mayor.

Previously high waters had peaked at 4.10 meters, he said. This time they crested at seven meters.

“You had no chance to prepare,” he said.

After waters had begun to quickly rise, a firetruck had warned residents to evacuate, he said. Still, 14 residents died, including 12 in a home for the disabled.

In the village of Schuld, full of historical homes, the river carried away entire buildings, leaving nothing but outlines where they once stood. Earth movers worked into the night to clear the wreckage.

Abdullah Ajou, 52, said that his family didn’t grasp the dangers until his wife noticed the water seeping into the house at 1 a.m. Thursday. It was too late to leave in the family cars, one of which lay at the bottom of a neighbor’s garden.

“I feel shocked and helpless,” said Sylvia Alex, 50, who was helping clear out a friends house. “And I just keep thinking of the missing. There are so many missing.”