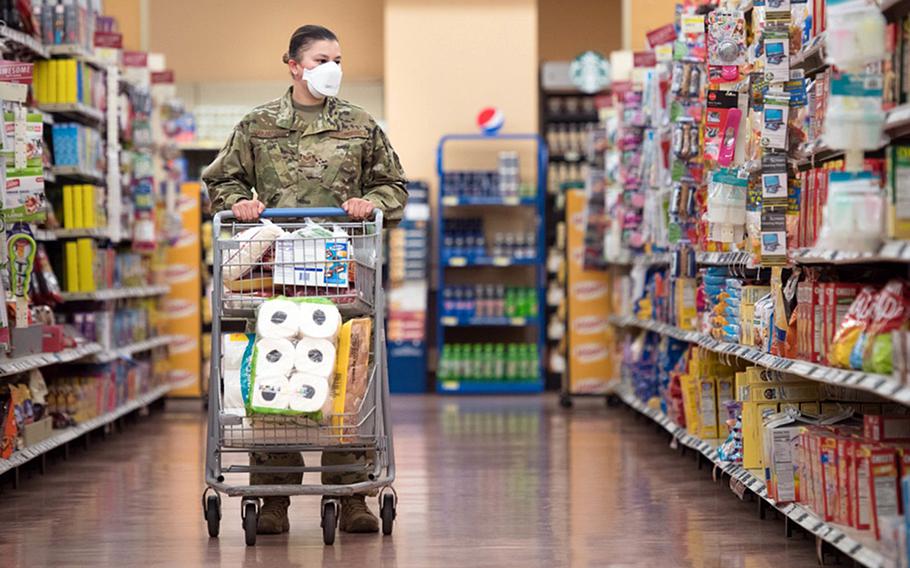 An airman shops at the commissary at RAF Mildenhall, England. U.S. Air Force personnel are required to wear face masks while visiting many public base facilities. On July 19, the U.K. is expected to end mask mandates in England, but the Air Force may choose to retain stricter rules. (Brooke Moeder/U.S. Air Force)

U.S. Air Force officials in England will consider whether base coronavirus rules should be adjusted if the U.K. lifts its restrictions as planned on July 19.

British Prime Minister Boris Johnson said in a televised address July 5 that the time has come for people to take “personal responsibility” for their health, rather than obey a “government legal diktat.”

The government is set to end the legal requirement to wear masks, although “guidance will suggest where you might choose to do so,” Johnson said. Social distancing requirements, limits on gatherings and QR code check-ins at restaurants would also end, he said.

The measures would only apply in England because other parts of the U.K. have their own rules.

“RAF Mildenhall will continue following the guidelines set by our host nation,” base spokeswoman 1st Lt. Paige S. Mehringer said in a statement. “Additionally, in anticipation of U.K. guidance changes, our leadership team continues to review Defense Department and CDC guidance in coordination with our partner wings to ensure our policies are aligned and adjusted as needed.”

A command memo applying to all RAF Mildenhall and RAF Lakenheath airmen states that U.S. personnel are required to follow U.K. guidance, unless the rules in the memo are more restrictive. The rules include wearing masks and continuing to maintain a social distance of 6 feet when indoors and outdoors for those who haven’t been fully vaccinated, with few exceptions.

Those who are fully vaccinated must still wear a mask when on public transport or inside public facilities such as the base exchange, the commissary and hospital patient care areas. They must also wear a mask indoors if they are unable to maintain social distance.

London’s decision to lift restrictions comes as infection rates across the country and in many parts of Europe have declined sharply.