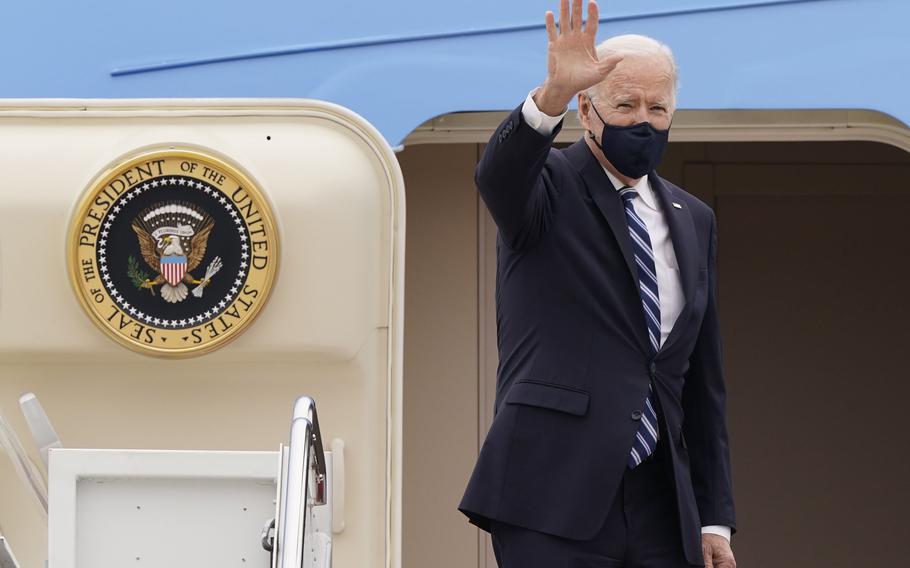 President Joe Biden waves from the top of the steps of Air Force One at Andrews Air Force Base, Md., on March 16, 2021. (Susan Walsh/AP)

LONDON — When U.S. President Joe Biden flies to Europe this week, he will find his hosts welcoming but wary. His predecessor Donald Trump may be gone, but he leaves a long shadow.

Biden's first foreign trip as president starts Wednesday and includes a gathering of the Group of Seven wealthy nations by the seaside in southwest England, a NATO summit, a meeting with European Union chiefs, and then a tete-a-tete in Geneva with his Russian counterpart and adversary, Vladimir Putin.

For most of America's allies, Biden is a relief. Trump often sowed chaos, accusing the NATO military alliance of leeching off the United States, insulting the European Union and storming out of a G-7 summit in Canada in 2018. In contrast, Biden has stressed his support for international diplomacy and emphasized "America's renewed commitment to our allies and partners" in a recent Washington Post article.

"I think we can expect to see lots of rhetoric and lots of good-vibe messages in this first visit of Biden to Europe," said Renata Dwan, deputy director of international affairs think tank Chatham House.

But she added that five months into Biden's term, "it's time to be more than 'not Donald Trump.'"

Biden has already mended some fences with America's allies. The U.S. has rejoined the Paris climate accord that Trump renounced, ended a minor trade war with the EU over aviation rivalry and is backing attempts to revive a deal meant to limit Iran's nuclear ambitions that Trump abandoned.

"America is back. And we are happy you are back," European Council President Charles Michel told Biden in March, when the president joined a video summit of EU leaders.

Yet it's not all smooth sailing, especially for British Prime Minister Boris Johnson, who is hosting the first G-7 summit in two years this weekend at the Carbis Bay resort in Cornwall.

Johnson wants to use the U.K.'s G-7 presidency to inject new purpose into the wealthy nations' club — undermined by Trump's unilateralism and sideswiped by the coronavirus pandemic — and to burnish the international image of a post-Brexit "Global Britain."

He's happy with Biden's commitment to fighting climate change that should help give momentum to November's COP26 global climate summit in Scotland. And Biden's promise to start sharing coronavirus vaccines with poorer countries — something aid agencies say should have happened sooner — chimes with Johnson's call for G-7 leaders to ensure the whole world is vaccinated by the end of 2022.

Closer to home, the British leader hopes Biden will agree to a trans-Atlantic travel corridor to help business and tourism recover from the pandemic. And he is seeking a U.K.-U.S. trade deal, touted by the British government as a plum post-Brexit economic prize.

But he has hurdles to overcome. A trade deal is not a Biden priority, and Johnson will have to work hard to charm a president who once called the prime minister a "physical and emotional clone" of Trump.

Biden has criticized Brexit, and is particularly concerned about its impact on Northern Ireland. Because of its land border with EU member Ireland, Northern Ireland has been given a special economic status that is causing friction between the U.K. and the bloc and heightening political tensions within Northern Ireland.

Biden, keenly aware of the key role the U.S. played in bringing about the Good Friday peace accord that ended decades of violence in Northern Ireland, has warned there will be no trade deal with Britain if Brexit undermines the peace deal.

There are tensions and divergences among U.S. and its other the allies, too. Biden has begun to rebuild ties with NATO, left angry and bewildered by Trump's unilateralism and his ambiguous relationship with Russia's Putin. Biden reassured the alliance that the U.S. backed NATO's doctrine of collective defense and would come to the rescue in the face of Russian aggression.

Britain and EU politicians generally support Biden's call for a "stable and predictable" relationship with Russia, but have low expectations of a breakthrough from his meeting with Putin.

But the U.S. still wants NATO's European members and Canada to spend more on defense — a constant Trump refrain, now taken up by Biden, if in a more muted way.

And while Washington informed its allies about its decision to pull U.S. troops out of Afghanistan, the news came "late in the day," said Dwan, the analyst from Chatham House.

There is also continuing U.S-European friction over the Nord Stream 2 pipeline being built to bring gas from Russia to Germany under the Baltic Sea. A persistent irritant between the U.S. and Germany during the Trump years, the pipeline still faces bipartisan U.S. opposition over concerns it makes Europe more dependent on Russia, though Biden has sought to take some of the heat out of the issue.

And European nations are more cautious than the U.S. about confronting and curbing an increasingly assertive, economically surging China.

Dwan said European nations are eager "not to be caught in the middle of a of a bipolar tension. Europe knows how that looks and feels."

Even Britain, which has excluded Chinese firms from its 5G network and opened its doors to thousands of people from Hong Kong as Beijing squeezes the territory's freedoms, is cautious about the tough U.S. approach. Johnson has stressed that he is not a "knee-jerk Sinophobe" and wants to engage with China.

Thomas Gift, director of the Center on U.S. Politics at University College London, says that for all Biden's warm words for allies, his priorities remain at home: vaccinating the U.S. out of the pandemic, reviving the COVID-battered economy and renewing the United States' aging infrastructure.

And he said the discord of the Trump years have made America's allies look differently at the United States.

"I think public opinion in Europe has soured to an extent on the United States," Gift said, including concern about whether it's a reliable partner. "But I think European leaders, by and large, are eager to work with the U.S. They still understand that it is the most important global superpower — even if some of that power is getting eaten up by a rising China."