Opposition grows on Okinawa to burning debris from quake 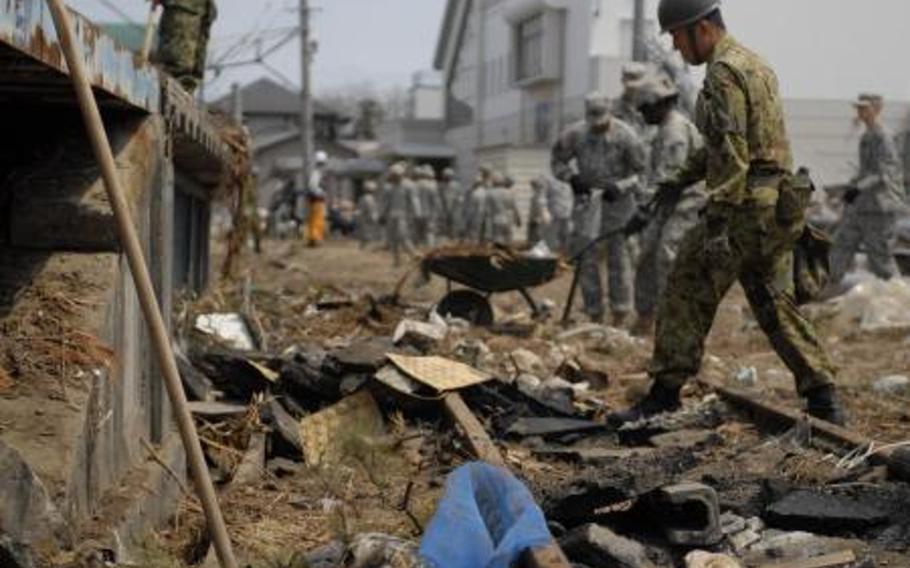 Japanese and U.S. servicemembers remove debris from railroad tracks in the Tohoku region of Japan on April 21, 2011. The effort was in support of Operation Soul Train. The region is struggling with debris left after the massive tsunamis, and plans to burn some of it in Okinawa is drawing heat from concern citizens. Some city governments on Okinawa are rejecting a proposal to help dispose of disaster debris from northeastern Japan amid radiation fears. (Monique Tindal/Courtesy U.S. Army)

Despite government assurances, hundreds of residents &mdash; including some in the U.S. military community &mdash; signed a petition to stop Japan from shipping the debris here, claiming that disposing of the waste could spread radiation and diseases across the island.

The Tohoku region has been struggling with about 25 million tons of debris left after massive tsunamis ground up coastal communities in March 2011 and without help from other areas of Japan, it could take nearly 20 years for some disaster-stricken areas to complete the cleanup, according to the Japan Ministry of Environment. The Japanese government wants to ship 4 million tons, about 16 percent, of the debris in Miyagi and Iwate prefectures to other areas of the country for disposal, an effort scheduled for completion in 2014.

The ministry has said the waste that would be shipped in Okinawa would not come from Fukushima prefecture, home of the damaged nuclear plant, and could be burned in local incinerators that capture virtually 100 percent of any radioactive material.

&ldquo;The debris to go outside the prefectures has either no [radioactive] cesium concentration detected or contains levels within the [government] safety standards,&rdquo; said Noriyuki Matsui, spokesman for the ministry&rsquo;s disaster waste task office. Matsui said high-performance incinerators can filter 99.9 percent of radioactive cesium from emissions and after the debris is incinerated and treated, the government estimates the amount of radiation in the condensed waste will be lower than that found naturally in the environment.

But Tracie Roberts, a Department of Defense teacher living on Okinawa, said she fears that burning the debris could pollute the island&rsquo;s air and drinking water and cause cancer among the U.S. residents, who account for about 74 percent of military forces stationed in Japan.

&ldquo;Our students and our children play outside,&rdquo; Roberts said. &ldquo;Sometimes we aren&rsquo;t as informed as we should be about dangerous things until we are exposed. How will we know until it is too late what our level of concern should have been?&rdquo;

A Facebook page has sprung up to support opponents and pass along information about Okinawa&rsquo;s plans to dispose of the debris, and an online public petition to the prefecture government had drawn more than 600 signatures by Tuesday afternoon.

&ldquo;It seems really, really risky to be sending this debris around to other parts of Japan that have not been affected&rdquo; by the earthquake and the Fukushima nuclear disaster, said James Pankiewicz, an Okinawa bar owner who founded the Facebook page and started the petition drive.

Pankiewicz said many residents doubt the Japan government&rsquo;s ability to safely monitor and contain radioactive waste that would be shipped out of the Tohoku region disaster zone, an area comprised of Iwate, Miyagi and Fukushima prefectures. The debris should instead be disposed within the prefectures where it was created, he said.

Over the weekend, the Air Force notified the U.S. consulate of the growing public concerns, according to the 18th Wing public affairs office at Kadena Air Base. The Marine Corps said Tuesday it is aware of the issue and referred questions to the Ministry of Environment.

U.S. Embassy spokeswoman Karen Kelley said Tuesday the United States has not discussed the issue with Japan but trusts the national and prefectural government will handle the debris safely under the country&rsquo;s existing regulations.

The decision to burn the waste is now up to local governments on Okinawa.

Last week, the prefecture sent letters to 41 of its municipal governments asking if local incinerators could be used, according to a spokesman for the prefecture&rsquo;s Waste Management Office.

Naha city and the municipality of Haebaru in southern Okinawa both said earlier this month they may be willing to burn the Tohoku debris if residents do not oppose the idea.

As of Monday, Naha had not made a final decision and was still grappling with some technical issues related to using the incinerators and growing public concerns over safety, said Seishu Ishikawa, chief of Naha city&rsquo;s Waste Management Office.