Buy Photo
A statue of a mother holding an ailing child at ground zero, a short distance from the Nagasaki Peace Park where Tuesday's ceremony was held. (Matt Burke/Stars and Stripes)

Buy Photo
A statue of a mother holding an ailing child at ground zero, a short distance from the Nagasaki Peace Park where Tuesday's ceremony was held. (Matt Burke/Stars and Stripes) 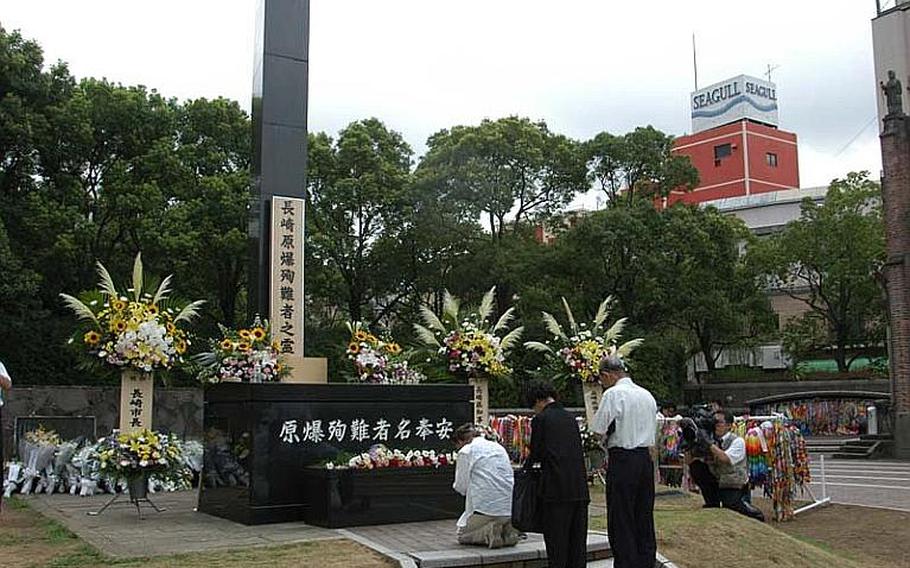 Buy Photo
An old Japanese woman breaks prays at the spot marking where the bomb fell. (Matt Burke/Stars and Stripes) Buy Photo
A man prays for the victims of the 1945 atomic bombing of Nagasaki before the iconic Peace Statue prior to Tuesday's ceremony. (Matt Burke/Stars and Stripes) Buy Photo
A conductor leads his vocal choir despite the driving rain prior to Tuesday's ceremony. (Matt Burke/Stars and Stripes)

Buy Photo
The iconic Peace Statue at the Nagasaki Peace Park, where Tuesday's ceremony was held. (Matt Burke/Stars and Stripes) 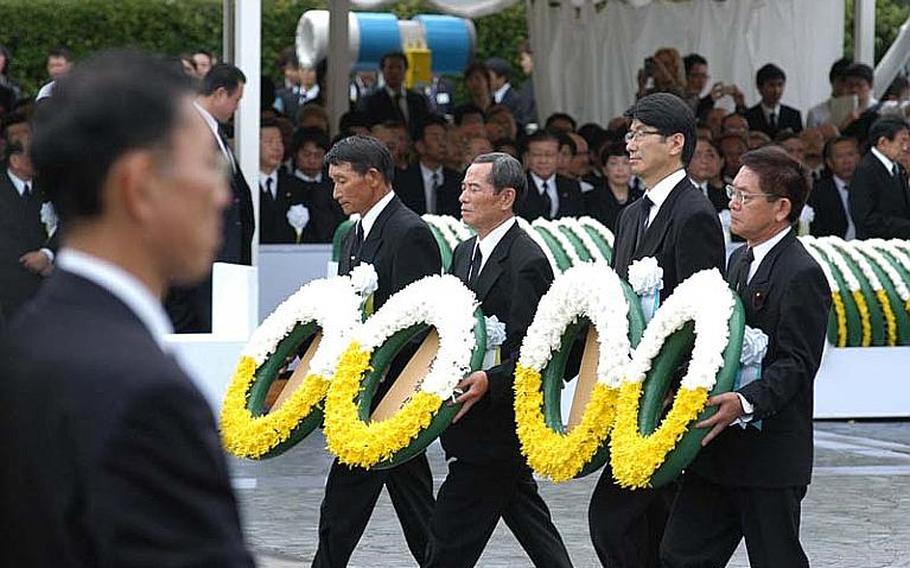 Buy Photo
Nagasaki city officials lay wreaths for the victims of the atomic bomb 66 years ago. (Matt Burke/Stars and Stripes) 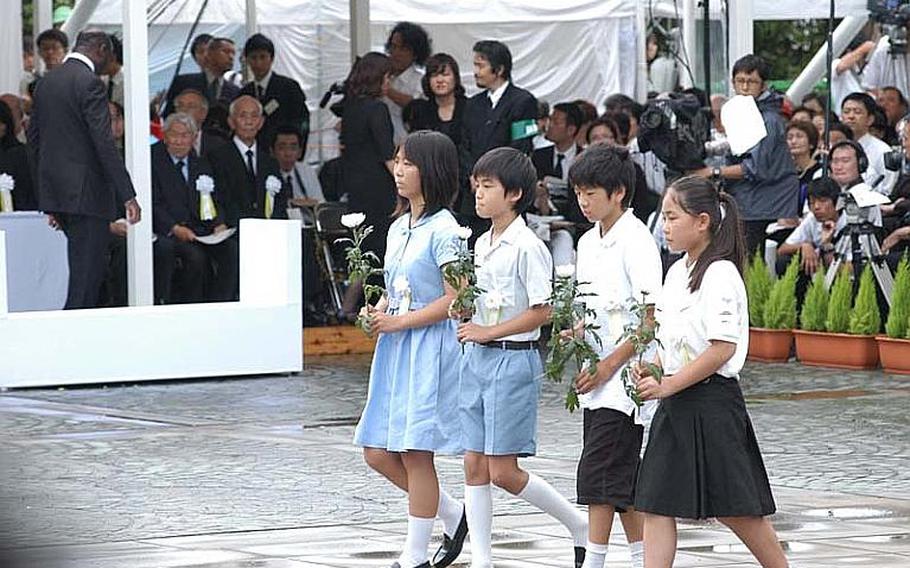 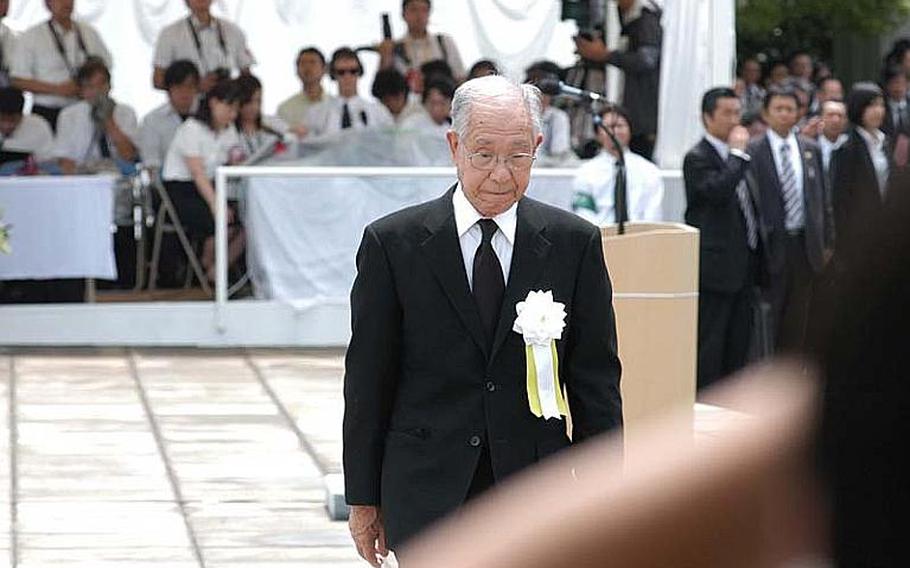 Buy Photo
Atomic bomb survivor Hisao Matsuo makes his way from the podium after sharing his tale of survival and loss at the age of 17 on Aug. 9, 1945. (Matt Burke/Stars and Stripes) 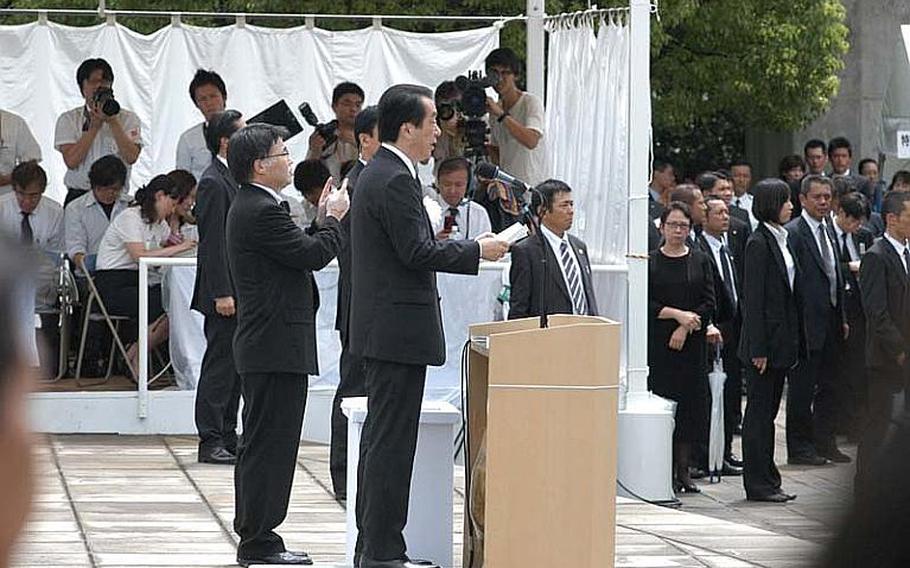 Buy Photo
Japanese Prime Minister Naoto Kan addresses the audience during Tuesday's ceremony. The Prime Minister called for the abolition of nuclear weapons and to switching to renewable sources of power to end Japan's reliance on nuclear power in the wake of the March 11 earthquake and tsunami. (Matt Burke/Stars and Stripes)

NAGASAKI, Japan &mdash; With the Fukushima nuclear power plant crisis fresh in their minds, Japan&rsquo;s leadership once again called for the abolition of nuclear weapons and its use as a power source at Tuesday&rsquo;s ceremony commemorating the 66th anniversary of the bombing of Nagasaki.

&ldquo;How has it come that we are threatened once again by the fear of radiation?&rdquo; Nagasaki Mayor Tomihisa Taue asked the crowd seated before the iconic Peace Statue. &ldquo;We offer our sincere condolences on the deaths of all of the victims of the atomic bombings and the Great East Japan Earthquake, and together with the city of Hiroshima, pledge to continue appealing to the world for the complete elimination of nuclear weapons.&rdquo;

The mood was particularly somber at this year&rsquo;s event due to the disaster in the north. Prior to the ceremony, many knelt and prayed before the ground zero marker where the bomb detonated &ndash; just a short distance from where the ceremony was held. Several elderly visitors had to be helped away as they were overcome with emotion. But the feelings of sadness came to a crescendo at 11:02 a.m., when an air raid siren bellowed in the distance and the audience members, many of them wearing black, bowed their heads.

The rain then gave way to blistering sun as 400 doves were released from behind the statue. The most moving moment of the day occurred when bomb survivor Hisao Matsuo &ndash; then 17 - recalled seeing his mother for the last time as he left home before the bomb fell. The intense blast of the bomb swept him off his feet, taking his breath away in the process. He recounted how he had returned home to find his sister and brother dead, his sister&rsquo;s body found in the family&rsquo;s air raid shelter. His mother was never found.

&ldquo;Although it was during a war, a merciless tragedy struck Nagasaki with the use of the atomic bomb,&rdquo; Matsuo said.

The ceremony marked the first time the U.S. has sent an envoy to both the Hiroshima and Nagasaki Peace Memorial services. U.S. Ambassador John Roos attended the ceremony at Hiroshima last year, the first such visit by a representative of the U.S. government. This year, Charg&eacute; d&rsquo;Affaires James Zumwalt attended both ceremonies.

Zumwalt did not speak at the ceremony, although he did lay a wreath with other dignitaries.

&ldquo;I am honored to be the first U.S. representative to attend the Peace Memorial Ceremony in Nagasaki, and to express my respect for all the victims of World War II,&rdquo; Zumwalt said in a statement released by the embassy Sunday. &rdquo;The United States looks forward to continuing to work with Japan to advance President Obama&rsquo;s goal of realizing a world without nuclear weapons.&rdquo;