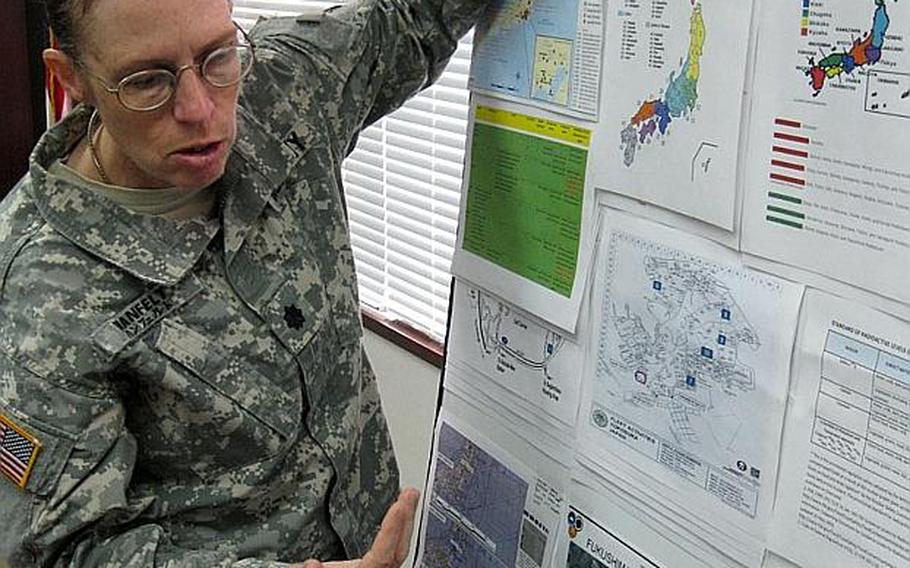 YOKOTA AIR BASE, Japan &mdash; The Defense Department is preparing to release estimates of the amount of radiation that penetrated 14 areas in mainland Japan following damage to the Fukushima Dai-ichi nuclear power plant this spring, military officials announced.

The plant, badly damaged when a massive earthquake and tsunami struck March 11, released a radioactive plume that contaminated air and water as far south as Tokyo and prompted the military to authorize the voluntary evacuation of approximately 10,000 family members from Japan.

The U.S. Pacific Command said the radiation dose estimates for the 14 areas, which are centered on U.S. bases, would be made public by year&rsquo;s end. It will be the first data released by a group of DOD experts charged with calculating radiation exposure for each of the approximately 61,000 U.S. personnel living and working in Japan during the nuclear disaster.

PACOM&rsquo;s top surgeon, Rear Adm. Michael H. Mittelman, told U.S. personnel in Japan in July that they had, potentially, been exposed to something that was not normal.

&ldquo;We thought it (estimating individuals&rsquo; radiation exposure) was the responsible thing to do so if there is ever a question, 20 years from now, they can go back and look at what their potential dose was,&rdquo; he said at the time.

Almost 20,000 servicemembers were involved in Operation Tomodachi &mdash; the U.S. effort to help Japan deal with the disaster&rsquo;s aftermath.

&ldquo;There are no expectations that any members of our DOD-affiliated population will have experienced an exposure to radiation that would result in any long term health effects,&rdquo; PACOM spokeswoman Army Capt. Kymberley Jurado said in an email.

The DOD experts have been reviewing radiological monitoring data from the U.S. Department of Energy, the DOD and the Japanese government, Jurado said.

The experts have been looking at air, water and soil samples, as well as ambient radiation readings taken at various sites in Japan, according to the Armed Forces Radiobiology Research Institute director, Army Col. Mark A. Melanson, whose organization is leading the dose assessment effort.

Individual radiation doses will be calculated by applying data collected during Operation Tomodachi to models based on those developed for health studies of U.S. atomic test veterans exposed in the 1950s and 1960s, he said during a visit to Japan in July.

&ldquo;lndividual radiation exposure estimates will be available after the approach and calculations used in determining the results are reviewed by an independent group of non-DOD experts,&rdquo; Jurado said, adding that data on individuals is expected by summer or early fall next year.

People who are not Military Health System beneficiaries will be able to receive their radiation dose estimates online through an Operation Tomodachi Registry website that is being developed, she said.