ZUOYING NAVAL BASE, Taiwan — The largest ship in the Taiwanese navy will make China think twice, despite its overwhelming sea power, about invading the island, according to security experts.

On Jan. 12, journalists were given a tour of the Yushan, a domestically built, 502-foot-long, 10,500-ton landing platform dock that was launched in April 2021 as the first of a planned fleet of four such vessels.

Built for amphibious warfare, the ships are capable of carrying and delivering a landing force by air or sea. The USS Green Bay, homeported at Sasebo Naval Base, Japan, is such a vessel in the U.S. Navy. 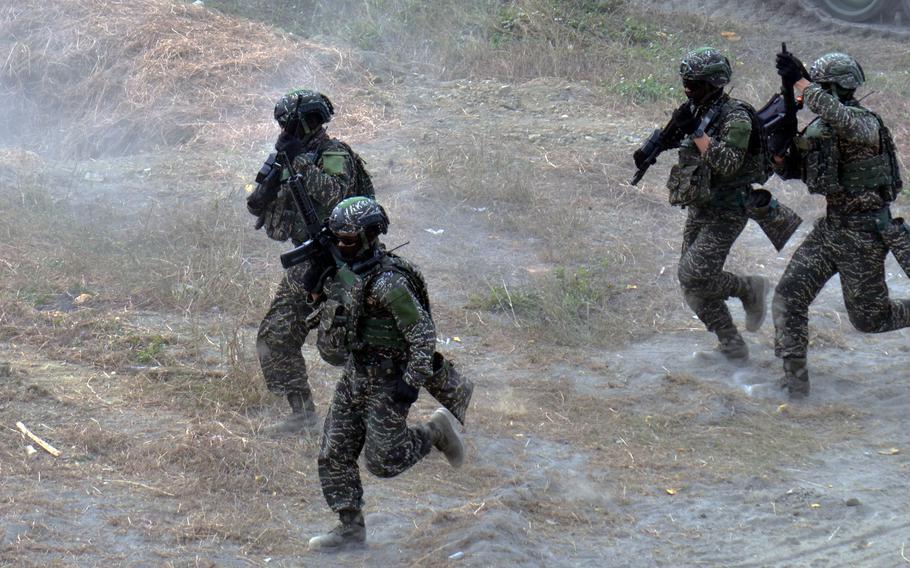 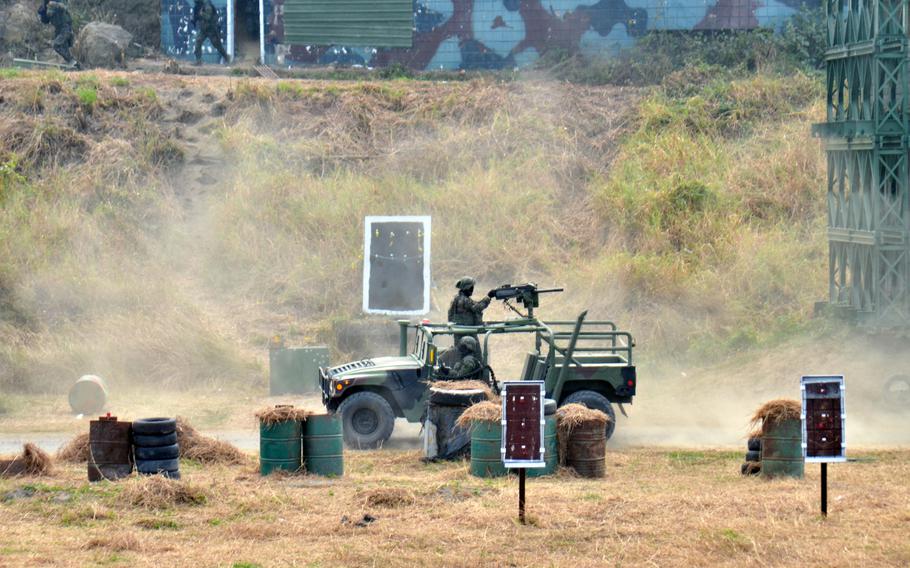 Sailors showed off the Yushan’s features, such as the below-deck bay where AAV-7 amphibious assault vehicles and Humvees can park. An S-70C Thunderhawk helicopter displaying Taiwan’s national flag landed and took off from the deck before two landing craft, loaded with reporters, launched from a well deck and chugged to a nearby beach.

Standing on the Yushan’s deck, Lt. Cmdr. Yen Tui-chi a tactical officer on the warship, touted the vessel’s capabilities, including anti-air missile defense and a reduced radar cross section.

“We represent an achievement of our national defense industry,” he said.

In peacetime, the Yushan can serve as a floating hospital and deliver emergency relief supplies, Yen said.

“In wartime we will, if necessary, deploy to offshore islands and transport goods and military personnel,” he said.

The Taiwan-administered Kinmen Islands, for example, are only 2 miles from the Chinese mainland. Nationalist troops held off several attacks by communists on the islands during the 1940s and ‘50s.

“[The Yushan] may be used to retake peripheral Taiwanese islands that [China] may seek to occupy as a de facto territorial claim instead of or prior to an invasion of the Taiwanese mainland,” Paul Buchanan, a New Zealand-based American security expert, said in an email Friday. 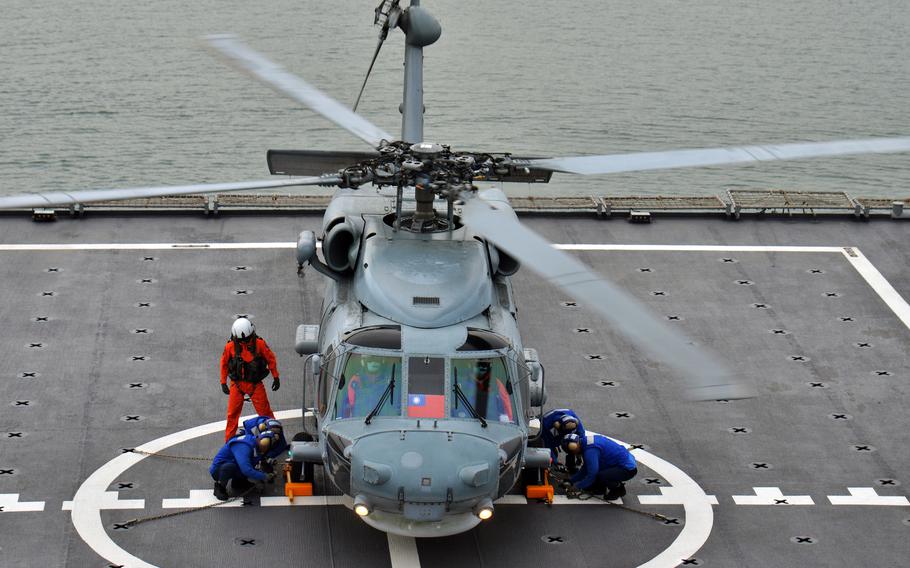 A helicopter is securted on the deck of the landing platform dock Yushan at Zuoying Naval Base, Taiwan, Jan. 12, 2023. (Seth Robson/Stars and Stripes) 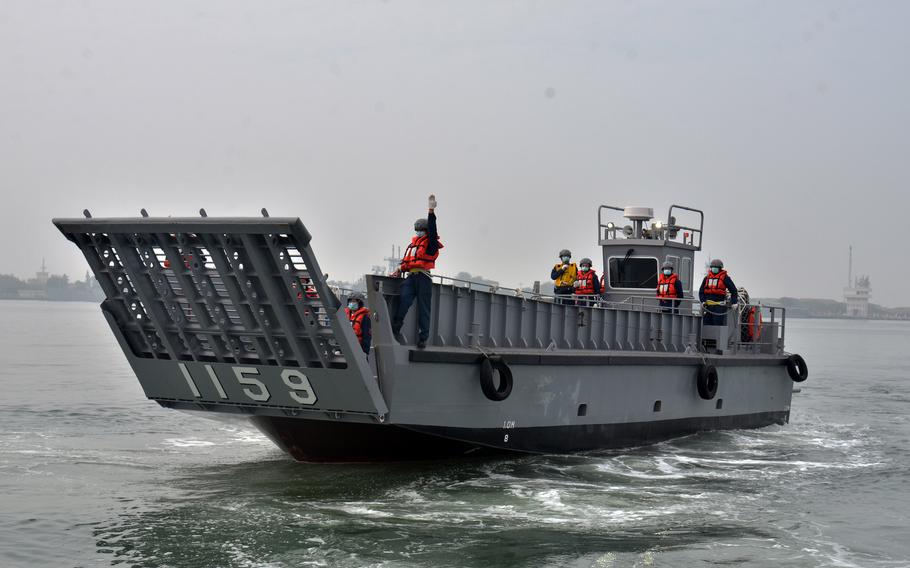 A craft launched from the landing platform dock Yushan heads toward a beach at Zuoying Naval Base, Taiwan, Jan. 12, 2023. (Seth Robson/Stars and Stripes)

However, the Yushan is vulnerable to Chinese air and naval missiles, he said.

China, with more than 340 warships, has the world’s largest navy, according to the Pentagon's 2022 China Military Power Report.

The Yushan likely wouldn’t last long in a war with the Chinese, according to retired U.S. Marine Col. Grant Newsham, a senior researcher with the Japan Forum for Strategic Studies in Tokyo.

“But that's not the point,” he said in a Jan. 14 email. “A good chunk of the US Navy and Air Force wouldn't last long in an all-out fight with the Chinese either. You do a lot of things in peacetime that you wouldn't do, or couldn't do, in wartime.”

Amphibious ships can help Taiwan master joint operations and could train with the U.S. Navy and Marine Corps or even Japan’s amphibious forces, Newsham said.

Such vessels could assist in humanitarian and disaster-relief operations overseas, something that is important politically for Taiwan, he said.

Marines, which the Yushan would carry along with landing craft to move them ashore, are essential to Taiwan’s defense, Newsham said.

“Tough, well-trained, mobile troops - armed with long-range precision weapons (and any other weapons) are the last thing [the Chinese] want to deal with,” he said. “You can't find them, you have a hard time killing (them), and they are coming at you from all directions. Taiwan needs more of them, and properly employed. And consider the effect on civilian morale to know you've got these kinds of troops in your military.”

U.S. Marine training for local forces on the island, confirmed by Taiwan President Tsai Ing-wen in October 2021 on CNN, isn’t at the scale needed to really have an effect, Newsham said.

The most useful thing the U.S. can do is train Taiwanese forces to defend the sea and air around their island using missiles, drones and mobile launchers, former Navy Capt. Jan van Tol said in an email Saturday.

Taiwan’s marines might play a role similar to that of U.S. Marine littoral regiments designed for sea denial, said Van Tol, a senior fellow at the Center for Strategic and Budgetary Assessments, a nonprofit defense-policy think tank in Washington, D.C.

The country should adopt a “porcupine” approach that would feature large numbers of shorter-range precision rockets, artillery, mortars and missiles, he said.

“Such systems would have far lower unit costs (than warships), but there would have to be many more of them, dispersed down to lower echelons of command, as the conceptual equivalent of ‘mobile minefields’ to greatly increase geographic or sea areas where [Chinese] forces would need to honor the potential threats and expend greater resources to counter them,” he said.