A Russian vessel, suspected to be a spy ship, has been operating near Hawaii in recent weeks, the Coast Guard said this week. The agency is monitoring the ship using “surface and air assets,” it added.

The presence of foreign-flagged military ships in the U.S. exclusive economic zone is neither illegal nor unusual, the Coast Guard said Wednesday. The zone extends 200 nautical miles, or 230 miles, from U.S. territorial waters, which are the maritime areas extending 12 nautical miles from a country’s beaches.

But the presence of the suspected intelligence-gathering vessel attracted the attention of U.S. defense officials due to the Kremlin’s ongoing invasion of Ukraine, as well as Moscow’s previous naval encroachments near U.S. coastlines. Sabrina Singh, the deputy Pentagon press secretary, said it was “precarious timing” for the vessel to be there.

Here’s what to know about suspected Russian spy ships seen near the United States.

Q: When have Russian ships been spotted near the U.S. coast?

A: In September last year, a U.S. Coast Guard cutter on a routine patrol near Alaska’s Kiska Island ran into a convoy of Chinese and Russian naval vessels, according to the Coast Guard. The three Chinese ships, which included a guided missile cruiser, and four Russian vessels, including a destroyer, were detected in an area inside the U.S. exclusive economic zone.

In December 2019, U.S. officials said a Russian spy ship, the Viktor Leonov, was sailing near the U.S. East Coast in an unsafe manner. “This unsafe operation includes not energizing running lights while in reduced visibility conditions, not responding to hails by commercial vessels attempting to coordinate safe passage and other erratic movements,” the Coast Guard said, according to the Military Times.

In 2016, the U.S. Navy reported sighting a Russian spy ship near Hawaii, as the United States and partner countries were conducting large-scale naval exercises, the Associated Press reported.

In 2015, Pentagon officials raised an alarm over the Russian spy ship Yantar, which is equipped with deep-sea submersibles, after it cruised near the East Coast on its way to Cuba. The Pentagon was worried the Russian ship was too close to major cables near the U.S. military base at Guantánamo Bay, The Washington Post reported.

Q: What threat do these ships pose?

A: They do not usually pose immediate threats to U.S. military and civilian ships, according to previous public announcements from Washington.

Singh, the Pentagon spokeswoman, told reporters Thursday that the United States had not yet witnessed “unsafe or unprofessional behavior” from the Russian ship near Hawaii. “We expect that the Russians will operate within the region in accordance with international law,” she said.

Capt. Bradley Martin, a retired Navy officer who now works as a senior policy researcher at the Rand Corp. think tank, said the Russian ship’s activities appeared to be more “a matter of routine rather than unusual interest.”

Q: What intelligence would such a ship gather?

A: Spy ships seek to obtain intelligence about an adversary’s sea and air traffic near a port, as well as radio and radar signals. Such vessels may also aim to gather intelligence about enemy warships, using electromagnetic equipment.

Martin, the former Navy officer, said he suspects the Russian ship to be watching primarily for “movements in and out of port, with particular interest in what might be unscheduled movements.”

The latest incident does not appear to have direct links to Russia’s ongoing invasion of Ukraine, he added. 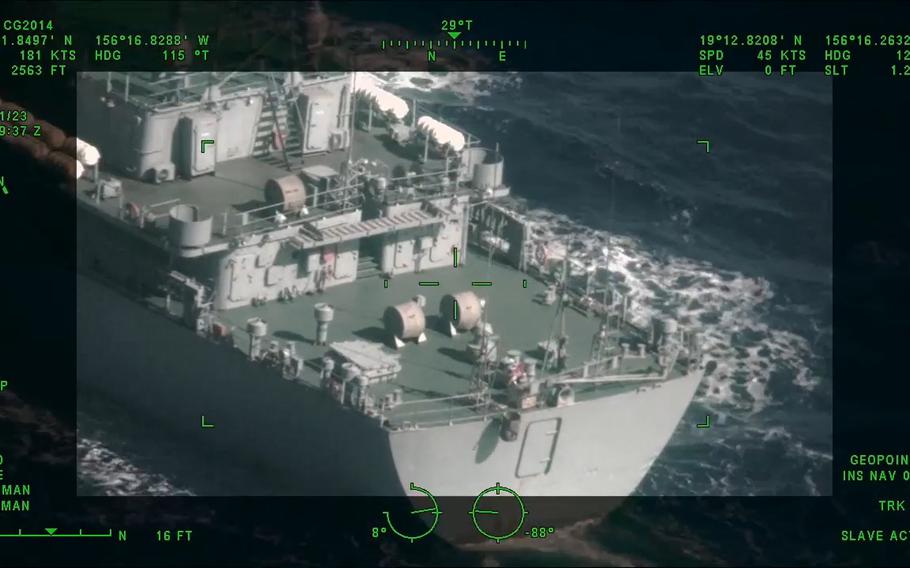 In this screenshot from video, the U.S. Coast Guard monitors a Russian vessel, believed to be an intelligence gathering ship, off the coast of the Hawaiian Islands. (U.S. Coast Guard)