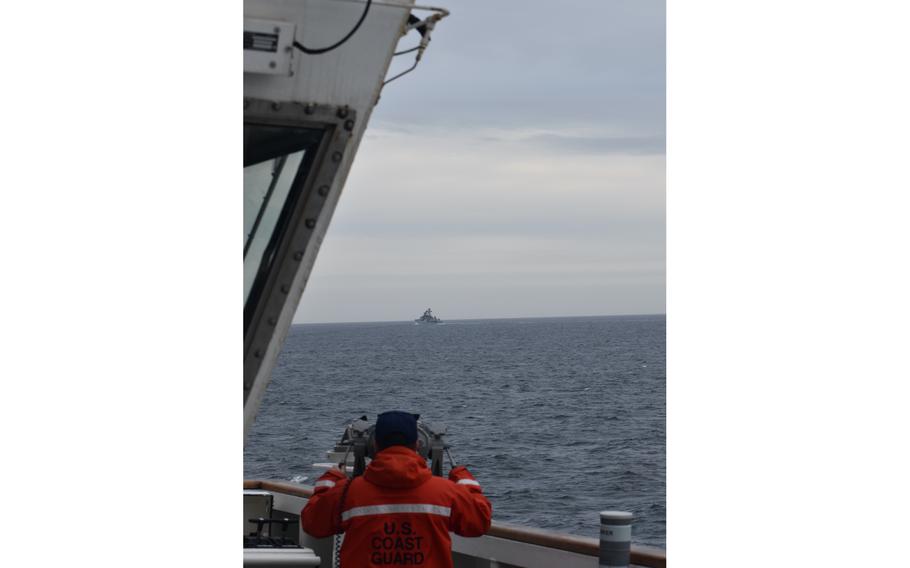 The crew of the Honolulu-based cutter Kimball was on a routine patrol of the Bering Sea on Sept. 19 when they encountered the Chinese guided-missile cruiser Renhai about 75 nautical miles north of Kiska Island, Alaska, the service said in a news release.

Kiska Island is part of the Aleutian Islands and lies roughly 1,300 miles southwest of Anchorage. The island is about 700 miles from Russia.

The formation was operating as a “combined surface action group,” the Coast Guard said.

The exercises were to include tactical maneuvering, communications, firing of artillery and helicopter operations, according to a Sept. 14 report by Russia's Tass news agency.

As a result of the sightings, the Kimball began operating under Operation Frontier Sentinel, which is “designed to meet presence with presence when strategic competitors operate in and around U.S. waters,” the Coast Guard said.

“While the surface action group was temporary in nature, and Kimball observed it disperse, the Kimball will continue to monitor activities in the U.S. EEZ to ensure the safety of U.S. vessels and international commerce in the area,” the Coast Guard said.

An EEZ is an area of sea in which a sovereign state, based on international law, has special rights regarding the exploration and use of marine resources.

Rear Adm. Nathan Moore, commander of the Coast Guard’s 17th District based in Alaska, said in the news release that the formation had been operating in accordance with international rules.

It is not unusual for Russia to conduct naval maneuvers in the Bering Sea. In August 2020, Russia conducted massive war games near Alaska that included dozens of ships and aircraft.

Relations between Beijing and Moscow have warmed recently, particularly after the Russian invasion of Ukraine in February.

Earlier this month, Russia, China and 12 other countries conducted wide-ranging drills in East Asia, with Russian and Chinese warships steaming through the Sea of Japan.