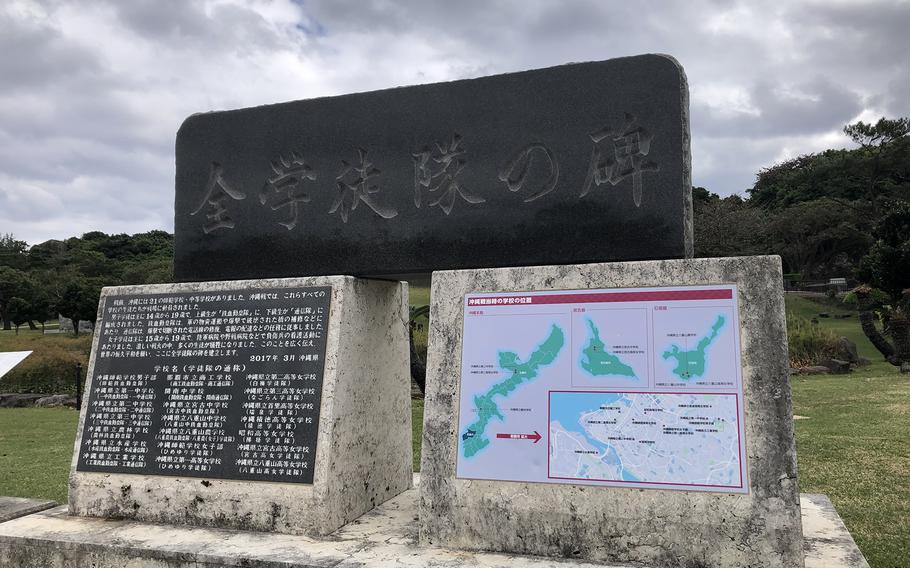 A memorial to students killed in the Battle of Okinawa was erected at Okinawa Peace Memorial Park in Itoman city in March 2017. (Keishi Koja/Stars and Stripes)

Moto zen gakuto no kai, or “group of all the ex-students who participated in the war,” expressed fears that Okinawa may again be drawn into war as Japan sites missile batteries and builds new bases throughout the Nansei chain, the group’s secretary, Seisaburo Miyagi, 94, told Stars and Stripes at his Naha home Wednesday. The Nansei chain includes Okinawa and stretches from Kyushu, the southernmost of Japan’s four main islands, to near Taiwan.

In 1945, students from 21 teachers’ schools, junior high schools and girls’ schools in Okinawa prefecture were ordered into wartime service, according to a report Tuesday in the Mainchi newspaper.

The survivors’ group called on Japan to “directly talk with neighboring countries and regions and strive to build peace with diplomacy while emphasizing the war-renouncing Constitution of Japan, based on remorse and lessons learned from its war of aggression,” according to the Jan. 12 statement.

The group said Japan’s military buildup is raising tensions in the region and resembles the run-up to World War II, according to the statement.

Moto zen gakuto no kai was founded in 2018 by the remaining members of Japan’s former student corps, who were compelled to support military operations and nurse wounded soldiers in the war’s waning days, Miyagi said. Nearly 2,000 of them died in the fighting.

Its members have worked to educate others about the costs of war, the statement said.

A students’ memorial was erected in March 2017 at Okinawa Peace Memorial Park in Itoman city, Miyagi said. He said the group has 24 board members, but he did not know how many survivors are left in the group.

The Chinese military presence is increasing in the seas east of the island chain and around Taiwan with naval drills, overflights and transits of key, narrow straits that give way to the Pacific Ocean.

In response, Japan has deployed troops to Yonaguni Island, about 70 miles off Taiwan’s eastern coast, Miyako Island and two spots on Amami Oshima.

Bases are being built on Ishigaki Island, roughly 150 miles east of Taiwan, and on Mageshima, 20 miles south of Kyushu, the southernmost of Japan’s four main islands.