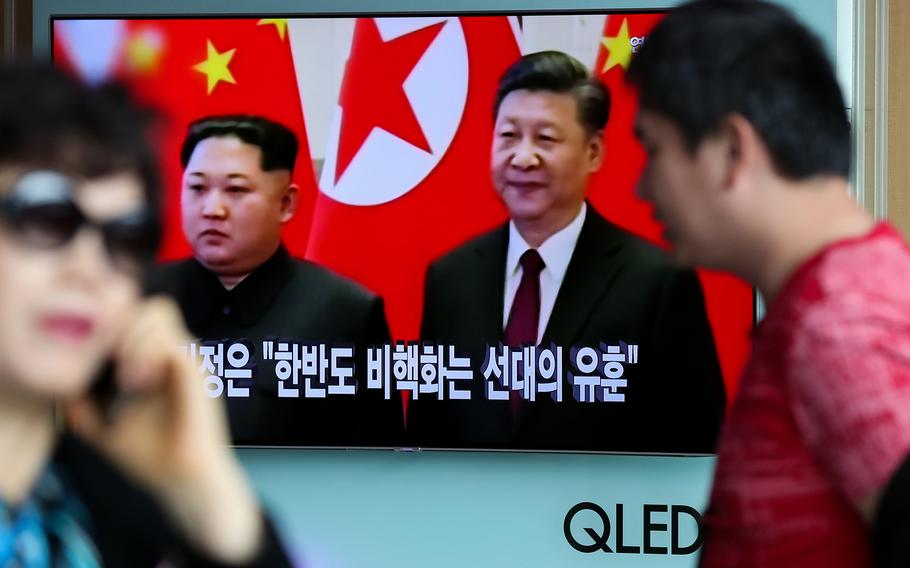 That made her a frequent target of surveillance, and her home would be searched without warning. Once, she was held at a detention center for more than a year, said Lee, 49, who defected to the South in 2019.

Those who pursued Lee worked for a shadowy surveillance operation inside North Korea called the Non-Socialist Groups, which use a network of informants to crack down on a wide range of behaviors deemed "nonsocialist" or against the principles of the nation by the Kim Jong Un regime.

The enforcers rely on fear, bribery and extortion to help Kim maintain his grip on society, and can be quickly mobilized to quash activities deemed problematic, according to a report by the Seoul-based Database Center for North Korean Human Rights that was first provided exclusively to The Washington Post.

The violations pursued by the groups include possessing or consuming South Korean media; singing, dancing or speaking in a manner that is not considered North Korean; attempting defection; or criticizing the regime. Those who are found in violation may be sent to labor camps or in extreme cases, publicly executed, researchers found.

The report, which will be released publicly Thursday, offers a rare in-depth look at the inner-workings of this network and highlights its pervasive human rights violations, ranging from aggressive inspection to physical and psychological abuse. The report is based on interviews with 32 former enforcers and victims, many of whom defected from North Korea between 2018 and 2020, just before it closed its borders due to the pandemic.

"This group had been in the shadows. It has not been publicized officially. … We had to explore the group's presence in daily lives of North Korean residents through oral testimonies," said Su Bobae, researcher at the human rights group. "Through testimonies, we identified how the Non-Socialist Groups play the role of inspector within the bigger surveillance society."

North Korea began tightening its surveillance activities after the deadly famine of the 1990s, which is estimated to have killed as many as 3 million. Families survived by illegally importing goods from neighboring China, paving the way for the black markets, or "jangmadang," that are now central to North Korea's economy.

This also led to an influx of information into the country, potentially threatening the totalitarian regime's survival. South Korean dramas and movies showed the South was a thriving capitalist country, rather than an impoverished one full of beggars and criminals as portrayed in North Korean propaganda, Lee told The Washington Post.

"Our mouths were dropped wide open, and we'd starve, locked hiding in our homes, just binge-watching," she said. "We saw the reality, and we went nuts. We were engrossed."

The Non-Socialist Groups were active by the late 1990s, and eventually spread through all regions, sectors and local communities to keep citizens in line, the report says. The enforcers serve about six months to two years to keep them from developing deep ties to the public, which might make them more sympathetic to them, researchers found.

Kim, the third-generation leader of North Korea, came to power in December 2011 more than a decade after the black market activity started flourishing. Under his rule, researchers found the groups redoubled their efforts to clamp down on the spread of South Korean media, which Kim has called a "vicious cancer" corrosive to the North Korean society.

"Kim Jong Un regime tries to prevent the outside information affecting people's ideology. The ideology is viewed as a crucial element for maintaining the regime," Su said.

Unlike his father and grandfather, Kim has had to contend with the millennials in his country who have grown up with access to smuggled goods and entertainment — the so-called "Jangmadang Generation" — which in many cases inspire them to escape the country.

Since the 2010s, a large number of violations identified by the Non-Socialist Groups relate to the consumption of such South Korean media by North Korean millennials, the report found. Authorities target their parents as well, blaming them for not disciplining their children, according to witness testimony.

The enforcers often have a quota to fill, and work to catch violators in the act, said Kim Eun-duk, a former North Korean prosecutor who oversaw their work.

The group members typically accept bribery — and sometimes extort people for more money — in exchange for letting them go, he said. Those who don't have enough for bribes would be referred for punishment. Researchers found that punishment depended on how much control the regime needs over its people at a given moment, rather than the severity of the crime.

"Women were searched, tortured and beaten. There [in North Korea] we do not know what human rights are. We did not have that concept. I only learned of that concept in South Korea," Kim, the former prosecutor who escaped in 2019, told The Post.

Lee, the defector, said the Non-Socialist Groups would typically target large-scale smugglers like herself, who can afford to pay large sums to be let go.

"They say if you join group for one stint, it's better than going to Russia [to make money]," she said.

Nonsocialist — and the more serious, regime-challenging antisocialist — activity is pervasive throughout the North Korean society, escapees said, estimating that the vast majority of people take part in behavior that the regime does not condone. Most people interviewed by researchers said such behavior is necessary to make a living in North Korea, bartering and selling smuggled goods to supplement meager wages. Others said they were curious about new and unknown things they could learn from illegal media, wanted to be entertained, and longed for freedom.

All 32 escapees told researchers they would continue their nonsocialist activities to earn a living even after inspections or crackdowns.

"All those who breathe in the society do it," said one anonymous escapee quoted in the report. "First, to make a living, second, to eat better than others, and third, to solve problems from work and be successful. Because you need money for all that."