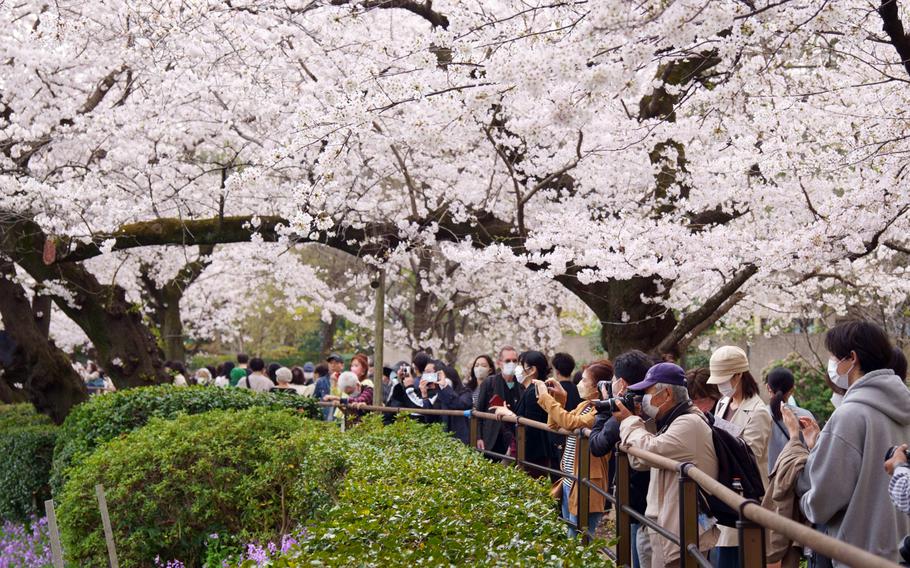 By March 22, 2023, blossoms should be opening in Tokyo, Kochi and Shimonoseki, followed by the Tokai and Kyushu regions, according to the first blossom forecast by Japan Meteorological Corp. (Akifumi Ishikawa/Stars and Stripes)

TOKYO – Expect cherry trees to begin blooming across Japan this year about the same time that they typically start their annual displays, according to recent forecasts.

By March 22, blossoms should be opening in Tokyo, Kochi and Shimonoseki, followed by the Tokai and Kyushu regions, according to the first blossom forecast by the Japan Meteorological Corp., a private firm, on Wednesday.

The opening of cherry blossoms, or sakura, are a cause for spring festivity in Japan. Visitors jam city parks and other popular spots to picnic or party beneath the cherry trees, or simply enjoy the flowers during a stroll, practices called ohanami, or flower viewing.

Cherry blossom forecasts are widely reported in anticipation of the event and to plan for the blossoms, which last only several weeks.

Weather forecasts show average temperatures for the year, meaning the trees will break dormancy about the same time they have blossomed every year since the most common variety of cherry tree, the Yoshino, was introduced to Japan in the 17th century. By March 22, 2023, blossoms should be opening in Tokyo, Kochi and Shimonoseki, followed by the Tokai and Kyushu regions, according to the first blossom forecast by Japan Meteorological Corp. (Akifumi Ishikawa/Stars and Stripes)

Japan Meteorological Corp. predicts dates when Yoshino cherry trees start to flower and are expected to be at full bloom in approximately 1,000 locations from Hokkaido to Kagoshima, according to the forecast. Its next forecast is coming Jan. 26.

Another weather forecast company, Weathernews, estimated that Yoshino blossoms will appear on a similar timeframe, or even earlier, according to a company news release Thursday.

“It is expected that in Honshu, where they began to bloom earlier than an average year in many areas last year, [flowers] will begin to bloom at about the same time,” it stated.

Weathernews estimated that Yoshino trees will begin blooming in Tokyo on March 20, followed by Yokohama, Fukuoka, Kofu and Kochi on March 21.

Cherry blossoms should be on full display nationwide before Golden Week, a series of holidays from late April to early May, according to Weathernews. The first blossoms will open in western and eastern Japan in late March, followed by the Tohoku region in early April and Hokkaido in late April.

In 2010, the Japan Meteorological Agency stopped forecasting cherry blossom dates, which it had made annually since 1955, after private companies began putting out forecasts.